Flowered Sectonia,[from internal data] known as Sectonia's Flower in the British English version (though still just referred to as "Queen Sectonia" in-game), is the final boss of Kirby: Triple Deluxe's Story Mode, and appears as the final boss of The Arena in that game as well. Queen Sectonia takes on this form by merging with the Dreamstalk as a last resort to destroy Kirby and subsume everything she can see, including Floralia and Dream Land.

This final battle has three phases in the Story Mode, though only the second phase (the first battle) is fought in The Arena.

After merging with the Dreamstalk, Queen Sectonia summons a lot of vines to impede Kirby's progress (called Sectonia Vine in-game). King Dedede and the People of the Sky appear to help Kirby break through the barrier. They do this by bringing in a cannon, using Kirby as the cannonball. The player controls King Dedede with the Nintendo 3DS gyroscope to aim the cannon and fire Kirby at the vines' weak points. Otherwise, Kirby will ricochet off the vines and take damage. After clearing the vines away, Kirby is then fired directly into the next phase. 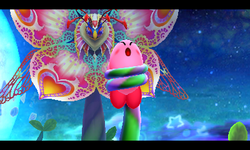 Flowered Sectonia attempts to strangulate Kirby during the battle when his guard is down.

The primary body of Flowered Sectonia in this form is revealed in the background as Kirby must make his way toward her. During this phase, Kirby has to hit the eye stalks to deal damage.

The following lists all of Flowered Sectonia's attacks. Attacks in italics are exclusively used during the last quarter of the battle when Sectonia attacks with four eye stalks instead of two. Note that the attack names are conjectural:

In The Arena, this is the only phase to fight and defeating the flowered queen will complete the boss endurance.

In The True Arena, this is replaced by Soul of Sectonia, the DX version of Flowered Sectonia, using even stronger attacks in different patterns. 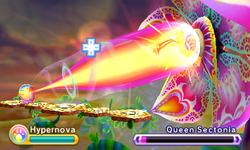 The final Hypernova inhaling sequence, which requires the player to rotate the +Control Pad or Circle Pad.

After the first battle, the queen is not defeated yet and takes a vine and grabs Kirby, in an attempt to finish him by constriction. At this moment, King Dedede and Taranza come to save Kirby. They do this by first releasing him from the bind, then feeding him a Miracle Fruit to activate Hypernova.

The last part of the final battle takes place with Kirby using Hypernova to deflect the queen's last line of defense. All projectiles from the queen can be inhaled and spit back at the eye stalks. At the very end of the fight, Kirby inhales a power beam fired from the queen's primary stalk, her leaves, and even her depleted health bar. Then, Kirby spits them back to vaporize her.

In The True Arena, however, Soul of Sectonia is not defeated yet after the first battle. The queen will spurt out from the Dreamstalk with only her upper body left, and will challenge Kirby in the true final battle of the game.

Two tracks are used for the final battle with Flowered Sectonia: