Beam is a Copy Ability primarily obtained by absorbing an energy beam-using enemy, such as Waddle Doos or Laser Balls, as well as by using Copy Essences. It allows Kirby to perform one of several beam attacks, such as a magical beam whip attack, which is useful for hitting switches, Bomb Blocks, and Star Blocks behind solid walls in order to get to hidden areas and items. Typically, Kirby obtains a red and yellow jester hat when this Copy Ability is obtained.

Beam is among Kirby's oldest Copy Abilities, first appearing in Kirby's Adventure, and having solid representation in the series since then. In addition to the base ability, there are several spin-off powers and forms, including the Beam Mage, the Robobot Beam Mode, and the Flare Beam Super Ability. In more recent titles, it has also gained electrical properties, able to infuse allies' weapons with the Zap Power Effect in Kirby Star Allies. 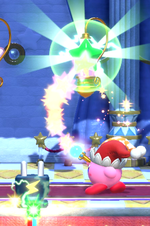 The Beam ability creates a whip of energy, which can be used to electrify as well as attack.

Beam is among the very first Copy Abilities in the Kirby series, first appearing in Kirby's Adventure, and showing up in a large array of subsequent games. In its simplest form, it allows Kirby to fire a short-range line of energy that starts high and drags downward. Using this ability forces Kirby to stop for a brief moment, but its range allows him to strike targets before they reach him, or even through walls. Used while falling, it can be an effective means of dealing with many foes ahead of Kirby, but using it above a bottomless pit may pose a danger, preventing Kirby from acting out of the attack until it is too late.

In later titles, Beam would gain a larger move-set, adding to its versatility. This includes the momentum-preserving aerial Beam Blast attack to rain tiny projectiles on enemies below, the powerful Wave Beam that can penetrate through foes, and the Capture Beam, which allows Kirby to grab and blast away enemies up close. Starting with Kirby: Squeak Squad, Beam would also regularly gain electrical properties, allowing attacks to activate wires or imbue allies with the Zap Power Effect. One particular derivative of Beam - the Beam Mage - even gains the ability to stop time with his Beam attacks.

Beam's most recognizable and common provider is the cycloptic Waddle Doo, who regularly uses the Beam Whip as his main attack. However, other enemies and projectiles can provide the Beam ability, including King Doo, Gemra, Laser Ball, and the drones from Security Force.

Beam Kirby first appeared in Kirby's Adventure where his Copy Abilities debuted. This ability allows Kirby to swing a beam whip downwards in front of him by pressing the B button. This ability appears largely unchanged in Kirby: Nightmare in Dream Land, but its visuals have been updated, giving Kirby his cap from Kirby Super Star and causing his face to light up when he uses it.

Due to Waddle Doo being the first ability-providing enemy that Kirby encounters in Vegetable Valley - Stage 1, Beam is often seen as the first obtainable ability in the entire series, as its position makes it likely the first ability any given player will try out.

Beam Kirby appears in Kirby Super Star and Kirby Super Star Ultra, this time with an expanded moveset. Its providers are Waddle Doo and Laser Ball, as well as Copy Essences. In the Sub-Game Milky Way Wishes, Kirby may also obtain and keep the Beam ability by using Copy Essence Deluxes. If Kirby has the Beam ability, he may transform the ability into a Waddle Doo as a helper. Kirby's appearance changes with a jester hat with stars, as well as turning amber. In these games, 1UPs will also turn this color.

Beam returns in Kirby & The Amazing Mirror, looking and functioning the same as it did in Kirby: Nightmare in Dream Land. Its only provider is Waddle Doo.

Beam appears in Kirby: Canvas Curse, provided once again by Waddle Doo. When Kirby has the ability, he can create a beam whip which travels around his ball-shaped body, hitting anything within range, similar to Kracko's beam attack.

The playable Waddle Doo has the same ability, and cannot discard it.

Beam returns in Kirby: Squeak Squad, functioning the same as in Kirby: Nightmare in Dream Land. An Ability Scroll can be collected for the ability which upgrades its power, turning the regular Beam Whip attack into the "Super Beam Whip" (スーパービームウイップ[1]), and allows it to create sparks that travel along metal surfaces.

There is a super variant of this ability known as Flare Beam.

Beam returns in Kirby: Triple Deluxe, relatively unchanged from its previous appearance, with the exception of the "Revolution Beam" technique getting removed.

Beam is also available as one of the abilities in Kirby Fighters.

Beam is one of the selectable abilities in Kirby Fighters Deluxe, functioning exactly the same as it did in Kirby: Triple Deluxe. Its unlockable Rare Outfit is a hat that resembles Marx's.

Combining Beam with the Robobot Armor allows Kirby to fire big bouncing orbs of energy at his foes.

Beam returns once again in Kirby: Planet Robobot, functioning like it did in Kirby: Triple Deluxe. In addition, it is one of the abilities compatible with the Robobot Armor, in the form of the Beam Mode. Here, it can be used to conduct electricity, similar to Spark, which is also in the game.

Beam appears as an ability in Kirby Star Allies, along with Waddle Doo who represents the ability as a Friend. Beam can be used to augment other abilities with the Zap Power Effect.

Beam Kirby returns in Kirby Fighters 2 as one of the abilities the player can choose from. It is unlocked after reaching Fighters Rank 10, and plays much the same as it has in the preceding titles.

In the Team Kirby Clash games, Beam takes on a new role and look as Beam Mage.

Beam appears under a different guise as the role Beam Mage from the Kirby Clash series of spin-off titles. The only major difference between the abilities is that Beam Mage's "Wave Beam" is upgraded into the "Time Beam", which can be charged to three different levels of power, and stops time for an enemy when they are hit enough times with the move.