This article is about bombs as standard objects in the Kirby series. For the Copy Ability, see Bomb. For the block, see Bomb Block.

A Bomb is an explosive object which typically takes on a black spheroid appearance with a fuse coming out the top. Aside from the ones tossed by Kirby, bombs can be found in many games and Sub-Games in the Kirby series, in many different contexts. For the sake of brevity, this article will not list Bomb Kirby appearances, bombs tossed by common enemies such as Poppy Bros. Jr., or enemies that resemble bombs such as Bomber.

Bombs are among the objects that Kirby can swallow and spit back out. They are first seen in Castle Lololo, and will take out all enemies in their path when spat out. Given their limited numbers, however, they are not all that important.

In addition to that, the bomb-tossing Mid-Boss Poppy Bros. Sr. debuted in this title. 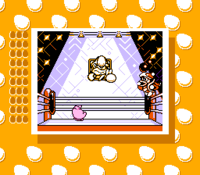 Bomb Blocks first appeared in this game, which cause a chain reaction when broken.

The Egg Catcher Sub-Game involves Kirby trying to catch eggs in his mouth while avoiding bombs. Eating a bomb automatically ends the game.

In Kirby's Pinball Land, bombs serve two separate roles (despite having the same sprite for both). The first is as a collectable item in the mini-game board for Kracko Land, where popping them up to the Kirby at the top will cause him to eat them, where they blow up in his gut and stun him for a moment (while also adding a bonus).

The second is as a projectile thrown by the boss Poppy Bros. Sr. in Poppy Brothers' Land. Colliding with one removes it from play, and awards 360 points.

During the battle with Nruff and Nelly at the end of Big Forest, Nruff is capable of tossing out bombs at Kirby. These can be inhaled and spat back, but do not grant any abilities when swallowed.

In Star Catcher - one of Kirby's Block Ball's sub-games - the player is tasked with collecting stars spat out by Kirby using the paddles while avoiding bombs. Colliding with a bomb causes the game to automatically end. 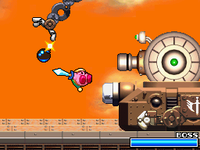 Kirby battling Main Cannon #2 as it tries to drop a bomb on him in Kirby Super Star Ultra.

In addition to Poppy Bros. Jr., bombs are the weapons of choice for many other enemies, including Jungle Bomb, Poppy Bros. Sr., the Combo Cannon, and Marx.

During the boss fight with Pon Con, large spiked bombs with skull insignia would occasionally drop from the ceiling. These could harm the enemies as well as Kirby. 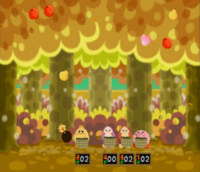 A bomb is about to detonate on the Yellow Kirby in this still from Bumper Crop Bump.

In addition to bomb-based enemies, attacks, and abilities in the main game, bombs disguised as fruit (or gems) also appear in the Bumper Crop Bump mini game, where they can drop from the trees on higher difficulties. If any players are caught in the bomb blast, they will lose all of their crop.

In Kirby Tilt 'n' Tumble, bombs can be seen on the course in some stages, which light when Kirby gets near them. They explode shortly afterward, leaving holes in the floor that Kirby can fall into if he is not careful, losing a life in a similar manner to a bottomless pit.

A Sub-Game exists in this game called Bomb Rally, which involves four different Kirbys batting a bomb around, exploding on the first one who misses a beat.

In Kirby Air Ride, bombs appear as items in the Top Ride mode. Here, when picked up, Kirby gains the ability to toss up to six bombs in succession, knocking around any foe they hit. The bomb can be dropped prematurely if Kirby is hit, performs a Quick Spin, or falls into a stage hazard.

In addition to this, there is also a Sensor Bomb item which can be used in City Trial. It is placed and hidden under the ground, and explodes when a rider moves over it, or after a set amount of time.

One of Kirby & The Amazing Mirror's sub-games Speed Eaters features bombs in place of apples that the Kirbys need to avoid inhaling.

In Kirby: Canvas Curse, bombs resembling balloons can be found on occasion as part of ambush sections. These can be dealt with using the Magical Paintbrush to pop them before they can reach Kirby. There are also exploding bomb blocks in the boss game Block Attack.

Bombs are the weapon of choice for the Squeakers in Kirby: Squeak Squad, along with Doc and Daroach himself. Bombs are also thrown by Boxy and Mrs. Moley. Lastly, bombs play a role in the sub-games Speedy Teatime and Treasure Shot.

One of the Sub-Games, Snack Tracks, involves four different Kirbys eating items on a conveyer belt, while swiping away bombs that come down the belt.

Kirby carrying a bomb wrapped up from a Bomber in Kirby's Epic Yarn.

In Kirby's Epic Yarn and its 3DS port Kirby's Extra Epic Yarn, Bombers can be wrapped up using the Yarn Whip to turn them into throwable bombs. A giant bomb is also used as one of Squashini's attacks. Bronto Burts can also drop bombs on occasion.

Exclusive to Kirby's Extra Epic Yarn, explosive items called "Boom Blocks" can be encountered in Dedede Gogogo. Touching one of these will cause it to detonate, knocking King Dedede back and causing him to lose 50 beads.

There are several different types of bombs in this title. They include the following:

The Kirbys use a Block Bomb to blast away a barricade.

Block Bombs are big block-shaped bombs which appear in Sandy Canyon - Stage 8, and are set on a fuse to explode. While they down, the Kirbys can push them into an advantageous position.

Block Bombs appear during the fight with Giga Clanksprout. The Mid-Boss drops them on occasion, and the Kirbys have to push them so that the creature picks up the bombs again, causing them to explode in its mouth.

This game introduced two explosive ordinances to use as items:

Additionally, bombs are used by the bosses Mr. Dooter and Metal General, in addition to the mechanical enemies faced in Scope Shot.

Timed Dynamite being used to destroy some metal blocks in Kirby: Triple Deluxe.

Timed Dynamite can be found in some stages, which can produce a powerful explosion. This and the Crackler also appear in Kirby Fighters (Deluxe).

In Kirby and the Rainbow Curse, bombs are dropped by enemies such as Bombzway, Claycia, and Dark Crafter. Some of these bombs can also be found inside bubbles.

In this game, bombs are dropped by Bronto Burts, though most others come in the form of missiles, which a great deal of enemies utilize.

In Rocket Rumble, a large timed bomb will sometimes appear on the stage, which can knock fuel out of rockets and KO Kirbys when it detonates. These come in various levels of power as well. These bombs also appear in Crazy Theater.

Kirby igniting a bomb attached to a rope in Kirby Star Allies.

At various points in stages, most notably Green Gardens, large bombs attached to a rope can be found. In order to activate these, Kirby or an ally must use a Sizzle-infused cutting weapon, such as Sizzle-Sword or Sizzle-Cutter. Unlike other bombs, these are incapable of harming Kirby or his friends when they explode. If they are cut without being lit, the bomb will roll away and then respawn attached to the rope again.

Fuses can also be found that are attached to huge bundles of dynamite, which will predictably explode when lit.

One of Magolor's attacks involves tossing out Gem Apple bombs which can be detonated at will. These also carry over into Kirby Fighters 2.

In the Kirby Fighters games, bombs can appear and fall on the fighters as one of the results of an Action Star being triggered. In addition, Waddle Dees will sometimes drop bombs shaped like food on the Gourmet Go Go stage in Kirby Fighters 2.