Yo-Yo (also called Yo-yo and Yoyo in Kirby Super Star) is a Copy Ability that can be obtained by inhaling Gim. It debuted in Kirby Super Star and likewise, it was also a part of its remake Kirby Super Star Ultra. The ability allows Kirby to utilize a bright red yo-yo to smack around enemies from a safe distance, comparable to the Beam or Whip ability. The yo-yo can also pass through walls and floors, making it useful for activating switches or solving puzzles.

Kirby can also obtain the Yo-Yo ability through Copy Essences Deluxe. With the yo-yo equipped, Kirby can create Gim as a Helper. In Kirby Super Star, Kirby is outfitted with a backwards ball cap when he acquires this ability. In Kirby Star Allies, this outfit also comes with a bandage on Kirby's right cheek.

Yo-Yo makes its first appearance in Kirby Super Star, and naturally returns in its remake Kirby Super Star Ultra. It is provided by Gim, who also serves as the helper representing the ability.

In Kirby: Triple Deluxe, Yo-Yo Kirby appears as a keychain, depicting his sprite from Kirby Super Star. Yo-Yo is not an ability in the game itself. 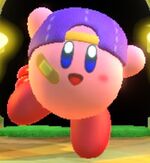 Kirby with the Yo-Yo ability in Kirby Star Allies.

Yo-Yo returns as an ability and makes its first 3D appearance in this title. Once again it is provided by Gim, who acts as its representative Friend. Yo-Yo also gains some new moves and can be infused with Power Effects such as "Bluster", "Sizzle" or "Splash".

Yo-Yo returns in Kirby Fighters 2 as a selectable ability for Kirby. It is unlocked upon attaining Fighters Rank 6. Its move-set is largely the same as it is in Kirby Star Allies.

Yo-Yo is not an ability in Kirby's Dream Buffet, but a Character Treat depicting Yo-Yo Kirby is available, using his sprite from Kirby Super Star. Another treat depicts artwork of Kirby with a Sizzle Yo-Yo from Kirby Star Allies.