Delivery Man is a motorcycle-riding delivery monster who appears in the Kirby: Right Back at Ya! episode Delivery Dilemma. He is called into Dream Land from Night Mare Enterprises in order to speedily deliver food from Kawasaki's to King Dedede and the other residents, though his real objective is to find and destroy Kirby. Once he finds his target, he proceeds to try and run the pink puffball down, but after receiving some help from Meta Knight, Kirby is able to defeat the Delivery Man using the Jet Copy Ability.

The Delivery Man is a small round creature who wears a motorcycle helmet that covers his whole body, in addition to having defined arms and legs. His helmet is white and red with an opaque visor that displays HUD information. The helmet also has yellow spikes that line the top like a mohawk and two red fire-like decals on the "ears". It is not known what the Delivery Man looks like underneath the helmet, and it is unclear if he is a living organism or a robot.

The Delivery Man rides a red and white motorcycle with very potent twin engines, allowing him to travel from Cappy Town to the interior of Castle Dedede within seconds. He is never seen off of the motorcycle, and he is extremely skilled at steering it both indoors and outdoors. He attacks primarily by ramming into his target. When this does not work, he can extend his legs to try and swipe at his target. As a last resort, his motorbike has a built-in missile launcher which can fire several volleys in quick succession. 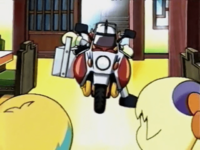 The Delivery Man appears in the episode Delivery Dilemma. Here, he is called by King Dedede in order to deliver him ramen from Kawasaki's without delay, as Kirby previously failed to deliver it. From there, the Delivery Man proceeds to take over all food deliveries for the restaurant, meanwhile searching for Kirby. Once the Delivery Man finds Kirby, he proceeds to try and run the pink puffball down with his motorcycle, hitting him several times. Before he can finish the job, however, Meta Knight jumps in and severs one of the Delivery Man's engines, allowing Kirby to swallow it and gain the Jet Copy Ability.