Monsieur Goan is a skilled chef monster who appears in the Kirby: Right Back at Ya! episode A Spice Odyssey. He is sent by Night Mare Enterprises to help King Dedede build a fancy restaurant in Cappy Town in order to both run Chef Kawasaki out of business and to trick the Cappies into eating Kirby. Kirby ends up defeating Monsieur Goan with the help of Chef Kawasaki using the Toxic Atomic Curry to burn him and his restaurant down.

Monsieur Goan is initially a small bean-shaped orange creature with similar physique to Chef Kawasaki. He sports thick blonde eyebrows and a mustache along with opaque glasses. He wears a striped red and white jumpsuit with a blue club tie and a chef's hat. He wears pink gloves and has purple feet. While he is only ever described as "foreign", he is most likely French due to his language and the nature of the dishes he serves. Monsieur Goan is an expert chef, able to produce food that makes the residents of Dream Land euphoric when they taste it. He has a secret recipe which can even hypnotize those who eat his food.

Monsieur Goan has a second form, which he assumes when he is ready to battle. He transforms into a giant sausage-shaped monster with three pairs of arms; each of which carries a different cooking implement. Notably, one of his arms carries an electric whisk which plugs into his hat. Each arm is capable of extending great distances, making fighting him tricky, even with the Cook Copy Ability. Monsieur Goan is ultimately weak to fire, though he is not defeated by the Fire ability, but instead by Kirby's heartburn after eating Chef Kawasaki's curry.

Role in A Spice Odyssey[edit] 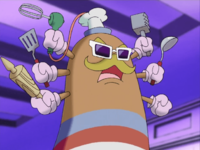 Monsieur Goan is sent to King Dedede by Night Mare Enterprises in order to help him establish a rival restaurant to Kawasaki's in Cappy Town. Upon its completion, all the Cappies flock to the new restaurant as the food Monsieur Goan prepares is far superior to and cheaper than that of Kawasaki's, or of any of their home cooking. This prompts Chef Kawasaki to resort to making his food extremely spicy to compete.

At the peak of the spice wars between the two restaurants, Monsieur Goan reveals his special sorbet, doused with a special ingredient that dyes it pink and coaxes the eater to crave more pink round things. After a few rounds of this sorbet, the residents of Cappy Town become eager to eat Kirby, and Goan uses this opportunity to transform into his monstrous form to attack the pink puffball. Chef Kawasaki tosses Kirby his frying pan to help, but Cook Kirby is still no match for Goan and is defeated. Goan then tosses Kirby into a dry ice bowl to freeze him to death, but Kawasaki returns with his Toxic Atomic Curry and throws it to Kirby. After eating this, Kirby immediately thaws out and spits flames at Monsieur Goan, setting him ablaze and defeating him, destroying the restaurant in the process.