Kirby's Dream Collection Special Edition (sometimes referred to as Kirby's Dream Collection for short) is a compilation title released for the Wii in Japan and North America only in 2012, in commemoration of the Kirby series' 20th anniversary. This collection consists of the first six main-series Kirby games and contains a large array of bonus features, including a unique challenge mode based on Kirby's Return to Dream Land and a showcase of all the games in the series up to that point including information on them, along with other features.

Kirby's Dream Collection Special Edition contains a Wii game disc containing ports of a selection of the first six classic Kirby games. Also included on the game disc are thirteen new challenge stages based on Kirby's Return to Dream Land, an interactive timeline of Kirby's history where one can read about and watch movies related to the various Kirby games, and three episodes of the anime series Kirby: Right Back at Ya!.

The collection also includes a soundtrack CD featuring tracks from numerous Kirby games spanning across the entire series, and a 45-page special collectible book containing various artwork and other behind-the-scenes information and content covering Kirby's history,[3] along with a manual-like booklet giving basic information and controls for each game, and three screenshots from notable moments in the games.

All games can be played with a Wii Remote, a Classic Controller, or a Nintendo GameCube controller, and all except for Kirby 64: The Crystal Shards support the Virtual Console's Suspend Point feature. The games also include digital manuals, and feature an optional frame around the edges of the screen when played in 16:9 (it always displays for Game Boy games, even in 4:3).

Four of these games—Kirby's Adventure, Kirby Super Star, Kirby's Dream Land 3, and Kirby 64: The Crystal Shards—were already available on the Wii Virtual Console, but the emulation in this collection is slightly different. Most notably, an emulation error with the coloring of Miracle Matter's boss arena in Kirby 64: The Crystal Shards was corrected.

At launch, Kirby's Dream Land was also already available on the Nintendo 3DS Virtual Console, making Kirby's Dream Land 2 the only exclusive game in the collection at the time. The Game Boy emulator used for this release is based on the original model, so it does not feature the additional colors and other features available to later Game Boy models and the Super Game Boy.

In addition, a Sub-Game exclusive to this collection called New Challenge Stages can be played, based on the optional challenge rooms from Kirby's Return to Dream Land. It consists of thirteen stages, where Kirby gets one or more Copy Abilities to work with, and focuses on score rather than only on completion of the stage. Kirby gets a score on how many enemies he has defeated, how much time there is left on the clock, and how many coins he has collected. At the end of the run, Kirby is given a ranking based on his score, which is, from lowest to highest, bronze, silver, gold, and finally platinum. Each level also contains a boss stage, where Kirby races against Magolor and can use all the copy abilities from the area, or from all challenge stages depending on which area it is. There is a small story to this Sub-Game, where Magolor has built a theme park for Kirby. He acknowledges the events from Kirby's Return to Dream Land, as well as talking about the challenges. Unlike in Kirby's Return to Dream Land, the player can use a Classic Controller or a GameCube controller to play the challenge stages, and the game supports the GameCube controller's rumble feature. However, this disables motion controls that are normally available with the Wii Remote (such as shaking the controller to charge up Spark).

A portion of Kirby's History, represented as a long hallway that Kirby runs up and down.

Finally, the disc contains an interactive Kirby history timeline where players can view all of the games in the Kirby series up until the point of this game's release. The timeline includes worldwide events that happened around the same time the Kirby game in question was released. If the player selects a game from the timeline, they can view a short video clip on said game (or play it if it is included in the disc) and can view the box of the game in a panoramic mode, as a theme directly from the game plays. Included along with the history are three episodes from the Kirby anime, Kirby: Right Back at Ya! (those episodes being Kirby Comes to Cappy Town, Crusade for the Blade, and Waddle While You Work), as well as a video performance of "Gourmet Race to Green Greens ~ Chamber Music".[3] 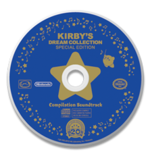 An additional disc is included in the game box, referred to as the Kirby's Dream Collection Special Edition Compilation Soundtrack, which is an audio CD. It features 45 tracks, most of which are selected pieces of music from various Kirby games, grouped in chronological order of the games' releases. After the tracks taken from Kirby's Return to Dream Land, there are three bonus tracks which are rearrangements of Kirby songs arranged specifically for this soundtrack. 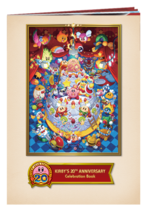 Lastly, a 45 page booklet is included in the game box, called the Kirby's 20th Anniversary Celebration Book. This booklet has various details on Kirby's history along with fun facts about most of the games in the series, along with pieces of artwork, concept art, trivia, and more.

The following is a list of staff who have worked on Kirby's Dream Collection Special Edition: