Heavy Lobster is a boss and the Halberd's security guard in Kirby Super Star and Kirby Super Star Ultra. Its strategy is running, walking, and clopping out unknown red goop that gives Kirby the Paint Copy Ability, miniature versions of itself (similar to Heavy Mole), and flames.

Hence its name, it is a golden, heavy machine, that resembles a lobster. It has wing-like projections on top, which do not seem to serve a purpose; green (when not aggressive) and red (when aggressive) eyes; and a booster on the back. Heavy Lobster is not always gold. In all battles off the Halberd, Heavy Lobster is silver, and when Kirby uses the paint ability on it, Heavy Lobster turns red. Its eye also gets covered with paint, so it attacks randomly instead of targeting Kirby. 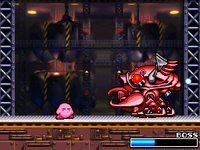 Here, Heavy Lobster serves as the third boss in the Sub-Game Kirby Brawlball. He uses the same attacks as he does in Kirby Super Star and its remake, but can also turn invisible for some time, making him invincible.

Heavy Lobster appears as a monster in the Kirby: Right Back at Ya! episode Combat Kirby. Here, it is sent by eNeMeE to destroy the Halberd before it has a chance to reach his fortress, arriving through a pod that latches on to Meta Knight's battleship. Once it arrives, Heavy Lobster proceeds to storm the halls of the ship and make its way toward the main engine room while the crew tries to stop it. Initial attacks via missile launcher and Cook Kirby fail to subdue it, but it is defeated at the last possible moment when Kirby uses the Ice Copy Ability to freeze it, allowing a missile blast to shatter the monster.

Heavy Lobster is largely the same in terms of appearance and size as it is in the games. Its powers are slightly different, however, as it attacks mainly by shooting explosive laser blasts from its claws and melting walls with its heat ray. Unlike in the games, Heavy Lobster is not defeated using the Paint ability, but the Ice ability instead.