This article is about standard switches seen throughout the Kirby series. For the big switches found in secret areas, see the Big Switch page. For the home console from Nintendo, see Nintendo Switch.

A Switch is an object that, when interacted with by Kirby or another character, triggers something to happen elsewhere in the area, usually a gate to open or a blockade to break apart. 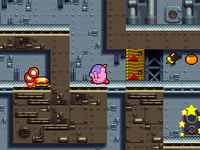 Kirby hitting a switch to open a gate in Kirby Super Star Ultra.

A typical switch is a small round button about the size of Kirby, usually inset in a gold base and with a star insignia. It can be triggered by contact or by being struck with any form of attack or projectile, though it cannot be weighed down by an item in most cases. When triggered, a switch will flatten out (or may disappear entirely). From here, it will either remain triggered indefinitely or it will reset after a particular amount of time depending on the switch and its function.

The primary purpose of a switch is to trigger a gate to either open or close. However, there are other uses for switches, including the following:

Depending on the title, a switch may fall downward when its supporting floor is removed. If it falls into an irretrievable place, Kirby will need to leave the area and return to make it appear again. 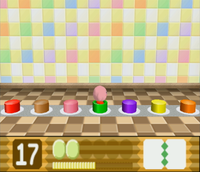 Switches in some games - such as Kirby 64: The Crystal Shards - behave differently to standard switches.

A few entries in the Kirby series have featured variants of the standard switches. These include the following: