Mr. Tick-Tock is a Mid-Boss debuting in Kirby's Adventure. His appearance is that of a red, anthropomorphic alarm clock with golden bells on top of him. He possesses two white, gloved hands at the end of his short, blue arms, a pair of blue feet and a peach colored face with two eyes, angry looking eyebrows and a round, red nose with a mustache below it. 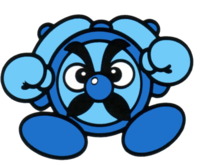 In Kirby's Adventure and its remake, Kirby: Nightmare in Dream Land, Mr. Tick-Tock is encountered in various areas throughout the game and among the few Mid-Bosses that are not fought in any of the Arenas. He possesses two main forms of attacking: He either marches towards Kirby, stopping and beginning to ring and emit harmful soundwaves when he reaches him, or he rings while keeping at a distance, which causes four large notes to be launched into the air at different angles that Kirby can inhale and spit at the Mid-Boss to hurt him. Mr. Tick-Tock yields the Mike Copy Ability when inhaled and swallowed after his defeat.

Mr. Tick-Tock reappears in Kirby Super Star Ultra, an enhanced remake of Kirby Super Star, although he is not found in the original game. Here, the Mid-Boss behaves the same as in Kirby's Adventure and yields the same ability, but is fought considerably more rarely throughout the game. He is primarily encountered in the Revenge of the King stage, being found in a hidden room in the Illusion Islands area, as well as the final area of the stage, The Revenge, where he is blue instead of red. Outside of this stage, his only other appearance is in The True Arena, where he is fought as part of the "True Mid-Boss All-Stars". In both The Revenge and The True Arena, he is the first of four mid-bosses fought.

Mr. Tick-Tock makes a very brief cameo appearance in the second volume of the Kirby novel series, Kirby and the Big Panic in Gloomy Woods!, where he encounters Kirby and pulls him into a conversation relating to fruits. Mr. Tick Tock is described as a scrupulous resident of Dream Land with an impressive mustache and prominent eyebrows. He is not accompanied by an illustration, leaving his appearance here imageless.