Bonkers is a simian-like Mid-Boss, wielding an enormous hammer which resembles King Dedede's. He is characterized as a large-bodied bipedal (though still noticeably hunched over in posture) anthropomorphic gorilla who wears denim jeans and a belt, and has a "coat" of what appears to be purple body hair around his upper body and head, though it is shaped like a heavy vest. His brow extends as to obscure his eyes, rendering them unseen behind a black veil (though some artwork portrays him with dot eyes). His arms are proportioned cartoonishly, with overly large forearms compared to the upper arm width. His hands and feet are well-defined, with five digits on each, unlike characters like Kirby who have no visible fingers or toes. His ears are often pointed like those of an elf, but this is not a consistent feature of his.

Bonkers made his first appearance in Kirby's Adventure. In order to attack, Bonkers may charge at Kirby, jump in the air and swing his hammer, or throw Coconuts at Kirby to deal damage. These Coconuts may be inhaled then shot out to harm him. Once defeated, Bonkers lays on the ground for a bit, like all mid-bosses, at which point Kirby can inhale him and get the Hammer ability. Since Bonkers is the only enemy with a hammer, he is the helper for the Hammer ability. He appears in every game with the Hammer ability, and has had many spin-offs and variations. 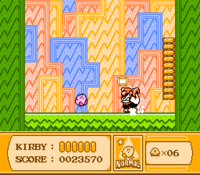 Kirby's Adventure marks the first appearance of Bonkers, and its remake also includes him. In the original, he is seen wearing either orange or blue, and he is only seen wearing purple in the remake. Most of Bonkers' signature attacks were introduced in this title, including his hammer strikes, leaps, and coconut tosses.

In Kirby's Adventure and Kirby: Nightmare in Dream Land, Bonkers can be found in the following levels and stages:

Bonkers also appears in the Arena in Yogurt Yard.

In Kirby Super Star and Kirby Super Star Ultra, Bonkers is a common mid-boss that appears in most of the game modes, starting in Spring Breeze. He is also the helper for the Hammer ability. As a mid-boss, Bonkers has largely the same move-set as he did in Kirby's Adventure.

Bonkers also appears as an opponent in The Arena and Helper to Hero, as part of "Mid-Boss All-Stars 1". He is not faced in The True Arena.

In both of these games, Bonkers appears as a Mid-Boss, looking and behaving essentially in the same way he did in Kirby: Nightmare in Dream Land. 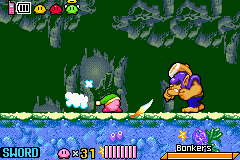 In Kirby & The Amazing Mirror, Bonkers may be found in the following areas and rooms:

Bonkers is also fought in the Boss Endurance as part of the group "Mid-Bosses 1".

In Kirby: Squeak Squad, Bonkers can be found in the following locations:

Bonkers appears in the Kirby Mass Attack Sub-Game Kirby Quest in Stages 13 and 37. In the latter, he appears alongside 2 Oohroo. He has 300 HP in this game mode.

Bonkers as he appears in Kirby's Return to Dream Land.

Bonkers reappears again as a mid-boss in Kirby's Return to Dream Land, appearing in various stages, and offering the Hammer ability. There is a super version of Bonkers called Super Bonkers that yields the Grand Hammer Super Ability.

In Kirby's Return to Dream Land Bonkers can be found in the following levels and stages:

Along with appearing in the games featured in the collection that include him, Bonkers also appears in New Challenge Stages. Bonkers is fought in Fighter Combat Chamber and Smash Combat Chamber EX, where he fights just like in Kirby's Return to Dream Land.

Bonkers returns again for Kirby: Triple Deluxe as a Mid-Boss that provides the Hammer ability. In addition to his normal moveset, he may also perform a hammer spin that takes him in and out of the foreground. In Kirby: Planet Robobot, Bonkers fights in exactly the same way, though he has been given robotic aesthetic changes such as a metal jaw and ears. In Kirby: Triple Deluxe, his EX form is called Bonkers DX. In Kirby: Planet Robobot, this variant is called Bonkers 2.0.

In Kirby: Triple Deluxe, Bonkers also appears as two separate randomly-obtained Keychains, one represented by his Kirby's Adventure sprite and another by his Kirby Super Star one. In Kirby: Planet Robobot, Bonkers appears as a sticker as well, as 'Manga Bonkers'.

Bonkers operates on a number of different attack orders in these games. Click "Expand" on the right to see the lists.

In both these main-series games, alongside the first battle against him in Team Kirby Clash Deluxe, his regular form attacks in a fixed order on loop as follows:

After losing around half of his health, he abruptly switches to one of two fixed orders on loop as follows:

In Kirby: Triple Deluxe, Bonkers can be found in the following levels and stages:

In Kirby: Planet Robobot, Bonkers can be found in the following levels and stages: 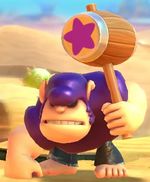 Bonkers is encountered three times in Team Kirby Clash Deluxe, and three more times in Super Kirby Clash. He's been made even larger, and his spinning moves made more elaborate to pose a challenge to four Kirby heroes working in unison. In Super Kirby Clash, he is paired with Blocky to form the Team Heavy Hitter. Despite this, he is out-shined by his flashier cousin Spark Bonkers.

The following are all of Bonkers' attacks in Team Kirby Clash Deluxe and Super Kirby Clash. Note that attack names are conjectural:

Bonkers himself does not appear in this game, but a large robot modeled after him called Robo Bonkers can be battled as one of the 10 main stadium modes. 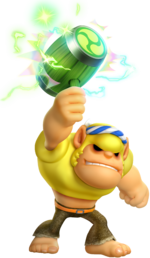 Artwork of Bonkers as a Friend from Kirby Star Allies.

Bonkers returns in this title, reprising his role as a Mid-Boss. Once defeated, he can be recruited as a Friend by tossing a heart at him before his body explodes. As a Friend, Bonkers can use all the same moves as Hammer Kirby, can perform the coveted Infinity Jump, and can also infuse his hammer with various Power Effects. In addition, Bonkers gains his own adventure in the Extra Game, titled Guest Star Bonkers Banana Mania.

Due to his larger size, Bonkers is a bigger target than Hammer Kirby, but he also possesses more health than Kirby.

The following is a list of attacks Bonkers can perform as a mid-boss in Kirby Star Allies. Italics denote attacks done by his harder variation only.

Bonkers operates on a number of different attack orders in Kirby Star Allies. Click "Expand" on the right to see the lists.

As a mid-boss, Bonkers' regular variation attacks in a fixed order on loop as follows:

After losing enough health, Bonkers will abruptly switch to this fixed order on loop:

Bonkers' harder variation attacks in a fixed order on loop as follows:

After losing enough health, he will abruptly switch to this pattern:

In some stages and on Soul Melter EX of The Ultimate Choice, Twin Bonkers is fought and comes in two varieties. It can consist of one regular and one hard variation or two hard variations, both of which attack in a different order from each other.

In Kirby Star Allies, Bonkers can be found in the following levels and stages:

In Kirby and the Forgotten Land, a variant of Bonkers called Wild Bonkers appears as a Mid-Boss. Their figure description reveals them to be Bonkers after joining the Beast Pack.

In Kirby's Dream Buffet, Bonkers' likeness can be seen on two Character Treats; one depicting his sprite from Kirby's Adventure, and another showing artwork of him as a friend with the Zap Hammer from Kirby Star Allies.

Bonkers appears as a trophy and as a sticker. As a sticker, it can be used in The Subspace Emissary, to grant +16 to weapon attacks. It only benefits Kirby, Meta Knight, and King Dedede.

*= Kirby can't actually inhale Bonkers to get the Smash ability as it only gives him the Hammer ability. Kirby can only inhale Master Hand to get the previous ability.

Bonkers makes an appearance as an enemy in the 3DS-exclusive mode Smash Run, and has his own trophy.

Bonkers appears as a primary spirit in this game. He boasts an Ace rank, with attack as his primary type, with one support slot. He can be obtained on the spirit board, with his spirit battle taking place on the Kongo Jungle stage and involving a purple Donkey Kong who wields a Hammer and can swing it for a long time.

Bonkers appears in the Kirby: Right Back at Ya! episode Goin' Bonkers, serving as the guest star and the monster of that episode. Initially, Bonkers lived on his own in a jungle outside of Dream Land, but was captured by a circus and forced to perform for them for a time. While in his cage, Bonkers would be able to catch glimpses of his trainer watching episodes of Kirby: Right Back at Ya!, and became enamored with the idea of being a Star Warrior like Kirby. Eventually, Bonkers was able to escape the circus with one of their hammers, and traveled great distances in order to reach Dream Land and find his idol Kirby.

Once he arrives, Bonkers causes a stir in Cappy Town when he asks about Kirby's whereabouts and accidentally clobbers those he asks with his hammer when he stoops to bow farewell. After a great deal of misinformation is spread about him, Bonkers manages to find Kirby, but is antagonized by King Dedede and his lackeys, who he is initially able to drive off. Bonkers begs Kirby to train him to be a Star Warrior, but his incomplete grasp of language along with Kirby's inability to speak outside of saying "poyo" confuses matters. King Dedede is later able to trick Bonkers into attacking Kirby by saying Kirby is testing his ability to fight, but this later backfires when Bonkers saves Kirby from a falling boulder that King Dedede and Escargoon were trying to roll at Kirby to crush him.

Fed up, King Dedede abducts Bonkers and takes him to Castle Dedede, where he is transformed into a larger more monstrous form by Night Mare Enterprises. In this form, Bonkers abducts Tiff and climbs to the top of the castle. Kirby flies after him on the Warp Star, and the sight of the heroic Star Warrior wielding the Hammer Copy Ability retrieved from Bonkers' hammer reminds the monster Bonkers of his true self, and he is able to return to normal. After all remaining misunderstandings are cleared up, Bonkers bids his new friends farewell after receiving a picture of himself with Kirby. He sets off for parts unknown in order to train to become a real Star Warrior.

Bonkers looks very similar to his appearance in the video games. Notable differences include extra brown hair on his face and arms, and his friendly temperament toward Kirby. His hammer also has a big "B" on it, which differs from the usual star insignia seen on his hammer in the games. On his back is a scabbard for his hammer, which is notable, since he does not have this in the games.

When transformed into his monster form, Bonkers and his hammer become significantly larger. He also becomes more disheveled in appearance, his eyes turn red, and he grows sharp teeth and claws. In this form, he acts with a blind rage, going after Tiff for seemingly no reason. However, as he remained good at heart, he was unable to be transformed completely, and seeing Kirby acting like a hero allowed him to return to normal.