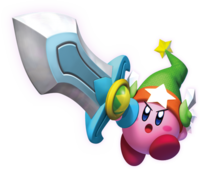 Artwork of Kirby with the Ultra Sword, the most iconic of the five Super Abilities.

A Super Ability is a special form of Copy Ability that was first introduced in Kirby's Return to Dream Land. Super Abilities are exaggerated and powerful forms of normal Copy Abilities which are obtained by swallowing star-studded "super" enemies and objects, granting Kirby the ability to clear away large obstacles and swathes of enemies in a single go. Super Abilities also grant Kirby the power to open rifts to Another Dimension (though only in specific areas), where he can then obtain Energy Spheres from Sphere Doomers. Unlike standard Copy Abilities, however, all Super Abilities operate on a timer, and once the timer runs out, Kirby loses the ability. Kirby will also lose a Super Ability if he is defeated, exits the stage he found it on, has it forcefully dispelled from him by a boss, or enters a rift to Another Dimension. In Kirby's Return to Dream Land, Super Abilities typically appear for the final stretches of certain stages, where Kirby needs to make use of their specific powers to interact with the varying devices, hazards, and enemies therein.

Super Abilities are primarily used to destroy unique stage obstacles and solve puzzles near the end of certain stages.

These enemies/obstacles are marked with stars on their body. Inside the parentheses are the Super Abilities required.

There are a total of six entities in Kirby's Return to Dream Land that provide Super Abilities. These are as follows:

All Super Ability-providing enemies, excluding Super Bonkers, can be made to reappear after their defeat without restarting the stage by leaving the area they appeared in and coming back. Doing so can grant Kirby a second Super Ability for further use in those instances, should he lose the first one. Super Abilities can be obtained from these enemies in typical fashion by inhaling them, but the ability stars will also drop from these enemies when defeated in any other way, and Kirby will don the Super Ability merely by touching these stars, overriding any other Copy Ability Kirby may have had in the process.

When battling Grand Doomer in the Story Mode of Kirby's Return to Dream Land, the final part of the fight has it encasing itself in a star-studded shield, which can only be broken using Super Abilities.

In the Main and Extra Modes of Kirby's Return to Dream Land, the bosses Grand Doomer and Magolor will be equipped with star-studded shields when their health is almost fully depleted, which require the Super Abilities obtained from the spawned enemies to destroy. The Grand Doomer fight makes use only of the Ultra Sword ability, while Magolor's fight makes use of multiple Super Abilities, ending with Ultra Sword. Notably, while special animations are used when Kirby is finishing off his opponent with the Ultra Sword, this ability is not actually required to defeat either boss once their shields are gone. Dealing the last blow with any normal attack causes them to be defeated in a manner similar to how it works in The Arena and The True Arena.

Additionally, Magolor's second boss form and Magolor Soul are able to use attacks reminiscent of Super Abilities. A version of Snow Bowl is absent in their arsenals but the Grand Hammer attack (used only by Magolor Soul) is given icy properties as a possible reference. It should be noted that these attacks only resemble Super Abilities, and do not have the same properties as those of Kirby.

Appearances and references after Kirby's Return to Dream Land[edit]

While Super Abilities are still largely exclusive to Kirby's Return to Dream Land, they have appeared (or at least have been referenced) in the following subsequent games: