This article is about the ability Burning, once called Fireball, and should not be confused with Fire, another similarly-named fire ability.

Burning (also known as Burn, Flame, or Fireball) is a Copy Ability obtained by absorbing specific types of fiery enemies in early Kirby games, and it gives Kirby the ability to charge towards his enemies while being engulfed in flames. This ability, though similar in element, is distinct from the early Fire ability, which instead involves breathing a cone of flame while holding still. This is one of Kirby's oldest Copy Abilities, making its debut in Kirby's Adventure, though it has largely been subsumed into Fire's move-set in later titles. 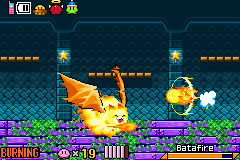 Burning allows Kirby to turn into a blazing fireball in order to tackle other fiery foes.

The Burning ability is one of Kirby's most distinct and iconic powers from the early days of his series. Upon obtaining this ability in Kirby: Nightmare in Dream Land and Kirby & The Amazing Mirror, Kirby dons a golden crown with a small red flame emblem attached to it. Also, while moving around, his hands are ablaze. In all earlier appearances, however, he gains no distinct change in appearance until using his fireball tackle attack. The attack itself automatically halts Kirby's vertical momentum and sends him careening at high speed straight forward, plowing through enemies, metal blocks, and other obstacles along the way. While traveling in this fashion, Kirby cannot be harmed by most things, though there is a brief window of vulnerability after finishing the attack where Kirby cannot move freely. This makes using the attack above bottomless pits or near spikes dangerous. Additionally, if Kirby slams into a wall while using the attack, he will recoil and bounce upward slightly. In certain situations, this can actually aid his movement, particularly in Kirby: Canvas Curse, where Kirby is otherwise dependent on Rainbow Lines to move upward.

In the games that Burning appears in, the ability can mainly be obtained from enemies such as Flamer, Fire Lion, Efreeti, and Bobo. Though once distinct from the Fire ability, the two began to merge starting with Kirby Super Star, when Fire gained the "Burn" move, emulating the Burning ability's function, though not being quite as potent. The two abilities would continue to appear separately from one another at regular intervals until Kirby: Canvas Curse, which served as Burning's final appearance as a distinct ability. From then on, it would be permanently subsumed into Fire, starting with Kirby Super Star Ultra.

Burning first appears in Kirby's Adventure, where it is called Fireball. Absorbing Flamer or Fire Lion allows Kirby to use this ability.

In Kirby: Nightmare in Dream Land, the ability is re-titled to Burning, but otherwise functions exactly the same.

Burning, referred to as "Fireball" in-game, reappears in Kirby's Dream Course, and is once again provided by Flamer. It can be used to dash forward at rapid speeds, similar to Wheel. If used to hit an opponent in 2 player mode, the other player burns for a few seconds and is launched into the air.

Burning appears in this game, provided by Flamer, Efreeti, and the Drop Stars from Mr. Bright's sunbeam attack. By himself, Kirby can use this move for its usual effect, but it gains additional powers when combined with the Animal Friends:

Burning (called Flame in-game and Burn in the manual) appears in this game, and can be obtained from Flamer or from an Ability Changer. Using this power, Kirby can fly straight upward and pass through many types of blocks, only coming to a stop when hitting a stronger obstacle or the paddle. It can be seen as the opposite of Stone in this game, as it travels straight up while Stone travels straight down.

While not appearing directly in Kirby Super Star and its remake, the move pattern of Burning is integrated in the games' regular Fire ability, specifically through its Dash + B move, Burn. This is the first game where Burning is folded into Fire's moveset, which would later become a series standard.

As in Kirby's Dream Land 2, the Burning ability can be combined with any of Kirby's Animal Friends, both old and new, to create a new power. The following combinations are possible:

In Kirby 64: The Crystal Shards, the Burn ability allows Kirby to perform a flame dash which charges through enemies. If Kirby obtains two Burn power ups, the dash will become much stronger and will last longer.

Acting the same as it did in Kirby: Nightmare in Dream Land, Burning reappears in Kirby & The Amazing Mirror alongside Fire. It can be obtained from Flamer and the Mid-Boss Batafire. It can also be obtained by swallowing the fire bullets from Master Hand and Crazy Hand.

Unlike most abilities in that game, Burning does not reappear in Kirby: Squeak Squad, but is instead integrated with Fire like in Kirby Super Star. This is also the last mainline appearance of Burning as its own Copy Ability.

In Kirby: Canvas Curse, Kirby can obtain Burning by defeating a Flamer or Bobo. Burning ability functions very much like in the previous games; however, the player must touch Kirby in order to activate it. When activated, the Burning ability destroys any gray blocks and blocks marked with a fire sign. Unlike in other games, however, it cannot be used to break metal blocks. One useful side-effect of the Burning ability is its upward recoil when hitting walls, allowing Kirby to gain height without the use of Rainbow Lines.

Though not a gameplay effect, when the player draws the picture quickly in Paint Panic, Kirby flies forward as if he activated Burning.

Burning Kirby makes a small cameo appearance in this game as one of the collectible Keychains that can be found throughout it, with a sprite from Kirby: Nightmare in Dream Land. 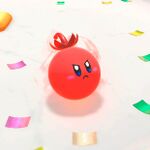 After over a decade of absence, Burning Kirby makes a reappearance in Kirby's Dream Buffet as a single-use Copy Food ability, taking the form of a chili pepper. It functions the same as prior titles (but in a 3D space). Unlike prior titles, the player can control Kirby's direction of movement as he charges forward. If used to hit an opponent, the other player is launched into the air and knocked back. If the player mashes R while using the ability, Kirby is given a small burst of extra speed. Kirby will not roll off edges while using this ability.

In Super Smash Bros. Melee and Super Smash Bros. Ultimate, Kirby uses the Burning ability as his dash attack. Notably, this attack allows him to pass through his opponents, but in Melee, it would not stop Kirby from falling off of ledges while the move was in effect, much unlike how it functions in the Kirby games. In Ultimate, the burning tackle simply stops at ledges instead.