The official logo for amiibo

amiibo are a series of collectible figurines based on characters from Nintendo franchises, which also tout functionality with various video games. Scanning in various figures will unlock bonuses in these games, which range from purely cosmetic changes to new content in the form of in-game items, characters and locations.

The first amiibo figurines that went out for sale were the ones related to Super Smash Bros. for Nintendo 3DS / Wii U. Among them were figurines of Kirby, King Dedede, and Meta Knight, as all three were fighters in that game. Later, concurrent with the release of Kirby: Planet Robobot, came a set of official Kirby series amiibo, including Kirby, Meta Knight, King Dedede, and Waddle Dee. 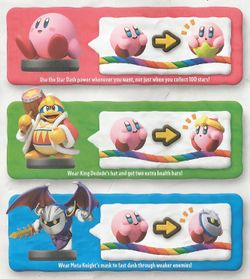 amiibo functionality in Kirby and the Rainbow Curse

Kirby and the Rainbow Curse is the first Kirby series game compatible with the Kirby series amiibo (including their Super Smash Bros. series amiibo counterparts), which can be scanned in to give Kirby a bonus during the playthrough of a level. The bonus obtained depends on the figure used, and can only be used once a day. The Kirby amiibo allows for unlimited Star Dashes, the King Dedede amiibo provides two extra hit points and the Meta Knight amiibo allows for fast dashing through weaker enemies.

Kirby: Planet Robobot is the second game compatible with amiibo. Here, the figures give Kirby a Copy Ability based on what type it is, as well as some Food (and a sticker if the amiibo is a Kirby series one).

If playing The Arena or The True Arena, the only way to obtain the Smash Bros. and UFO abilities in these modes is by using amiibo.

Unlike in Kirby and the Rainbow Curse, amiibo outside the Kirby series are also compatible.

Below is the list of Copy Abilities that can be obtained from an amiibo. Unless otherwise specified, the Copy Ability in question applies to all of the variant amiibo of the character (e.g. Super Smash Bros.-line and Super Mario-line).

In Team Kirby Clash Deluxe and Super Kirby Clash, scanning an amiibo will give the leader of Team Kirby various goodies, including Gem Apples and Fragments, with a rare chance of possibly receiving a Rare Fragment per scan. This can be done by visiting the Kirby statue to the left of Magolor's Shoppe in the village. Five different amiibo can only be scanned every 24 hours.

When asked to scan an amiibo, a rearrangement of Adeleine's encounter with Dark Matter (Art Attack) plays.

In Kirby's Blowout Blast, there is a special collection room where Kirby can obtain large statues of himself and his friends/rivals when the player scans a Kirby series amiibo (including their Super Smash Bros. series amiibo counterparts). This will also add more musical options to the hub, appropriate to the character scanned in. These additions are as follows based on the character scanned: 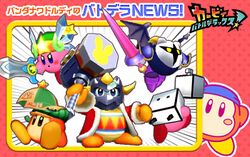 An official news post showcasing all of the amiibo Headgear for Battle Royale.

In Kirby Battle Royale, amiibo can be scanned in to unlock various Headgear for certain Copy Abilities or characters. The Headgear are purely cosmetic, and not required for 100% completion of the game: 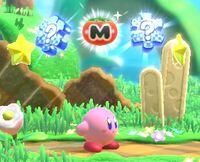 These items appear over Kirby's head and slowly float down to the ground when the Kirby amiibo is scanned.

In The Ultimate Choice, amiibo can be used up to 7 times in a row during a run, but this marks the results as using amiibo.

Scanning in a Kirby series amiibo (including their Super Smash Bros. series amiibo counterparts) will give Kirby a special hat to wear. These hats are based on the characters scanned, and function like the Ravel Abilities added into the game.

Kirby and the Forgotten Land's amiibo functionality is very similar to Kirby Star Allies. Scanning in a Kirby series amiibo (or a Qbby amiibo) while playing in the main mode will grant Kirby with a number of items, including a Stock Item and Star Coins. Scanning in any other amiibo figurine will also grant items, but not as many. The player can't use more than five amiibo in a row, and the count will reset after clearing a stage. The Colosseum also marks amiibo usage if the cup is completed successfully.