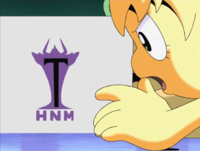 The logo for Night Mare Enterprises on a box, as shown in Kirby's Pet Peeve

Night Mare Enterprises (abbreviated as N.M.E.) is an intergalactic corporation in the anime series Kirby: Right Back at Ya!; established by eNeMeE to act as a front for sending monsters and other dubious and expensive equipment across the universe to alien civilizations in order to covertly weaken them in preparation for subsuming them into eNeMeE's empire. Night Mare Enterprises engages in this tactic against King Dedede by establishing a parasitic relationship with him through the N.M.E. Sales Guy, who acts as the company's front-man and drains King Dedede's treasury to sell him monsters that wreck his kingdom. However, these monsters invariably end up being dispatched by Kirby and his allies, and they later muster the necessary strength to invade eNeMeE's Fortress and destroy Night Mare Enterprises and its master once and for all. 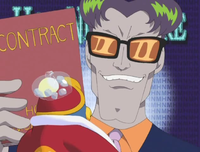 The N.M.E. Sales Guy taunting King Dedede with a hidden contract in Dark and Stormy Knight

Night Mare Enterprises is an intergalactic business that primarily deals with their customers by selling them monsters which are advertised to handle certain problems, but ultimately aim to work against the customers who bought them. These monsters are often sold at exorbitant prices, and N.M.E. takes every opportunity they can to scalp their customers further with express charges, optional features, and other arbitrary technicalities. These monsters are typically sent through an apparatus called the Monster Delivery System, which allows all sorts of things to be instantaneously transmitted to and from the purchaser's planet and connecting it to eNeMeE's Fortress, where the monsters are created. All of N.M.E.'s sales to King Dedede are handled by the N.M.E. Sales Guy, who is available at all hours and all days to handle video calls at a moment's notice.

Despite operating under the guise of a reputable business, N.M.E. often uses underhanded tactics when dealing with its customers. In particular, it makes use of hidden contracts in order to prevent their customers from petitioning for refunds or other forms of compensation for the often defective goods it sells. When customers accrue overdue unpaid balances, N.M.E. will also send monsters to covertly steal assets from those customers in order to make up the difference. N.M.E. may also incur other penalties for overdue bills, with one example in Junk Jam being turning Dream Land into an intergalactic dump site to punish King Dedede for not paying his due. Despite the regular abuse that King Dedede suffers in his interactions with N.M.E., he foolishly continues to rely on them for their monsters and other goods, even as the monsters are continuously bested by Kirby and his friends.

Night Mare Enterprises was established by eNeMeE shortly after defeating the Star Warriors in the great war that took place prior to the events of the show. The main purpose of the organization is to utilize the resources of eNeMeE's empire to establish a foothold on alien worlds outside his direct control and gradually weaken them while searching for Star Warrior stragglers to eliminate in the process. King Dedede established relations with N.M.E. many years before Kirby arrived in Dream Land, and intermittently ordered monsters which caused problems for his kingdom. It was this series of monster orders that eventually caused Kirby's Starship to direct its still immature occupant to Dream Land in order to protect it from eNeMeE's creations. From there, Kirby habitually becomes responsible for defeating the monsters that King Dedede orders to try and get rid of him.

When N.M.E. learns that Kirby has arrived in Dream Land, they intensify their shipments of monsters to there in hopes of subduing their greatest threat, but due to their insistence on charging King Dedede for the monsters they send at his discretion, Dedede often cannot afford to pay for this service. This leads N.M.E. to sometimes deny him shipment, even if it could potentially defeat Kirby. Over the course of the show, many schemes are hatched by Dedede and N.M.E. to try and destroy Kirby, but all of them are foiled in one way or another. Eventually, this strategy is ditched in favor of simply sending the Destroya fleet to completely destroy Dream Land, but by this point, Meta Knight and his companions are ready to launch their counterattack and eventually destroy N.M.E. after their attack on eNeMeE's Fortress at the end of the show.