Lololo & Lalala are a duo boss that first appeared in Kirby's Dream Land and reappeared in Kirby Super Star and Kirby Super Star Ultra, along with a few later spin-off titles. Their main attack consists mainly of pushing blocks (called Emerald Framers) across the screen, and vanishing into doors. They occasionally come out with Gordos rather than blocks.

Lololo & Lalala made their debut appearance in Kirby's Dream Land, the first installment of the Kirby series, as the boss of Castle Lololo. In this game, Lololo is portrayed as a blue, almost spherical creature with two large eyes, hands and feet, who wears white gloves and shoes. Lalala looks the same, but is red/pink and wears a yellow bow. The two have kept this basic design in all of their subsequent appearances. Since the game itself lacks color, however, they can only be distinguished in-game by Lalala's bow.

While floating through Castle Lololo, Kirby eventually comes across Lololo, who starts shoving Emerald Framers towards him which Kirby needs to project back at him to make him retreat back into the castle. After venturing to the end of the castle, Kirby faces both Lololo and Lalala in a four layer checked room. They attack Kirby with their usual tactic of pushing blocks (and, in the Extra Game, Gordos) from point A to B, disappearing into one of the eight doors once they reach it and reappearing from another. To defeat them, Kirby has to inhale the blocks and spit them back at them.

Lololo & Lalala (formatted as Lololo and Lalala in the instruction booklet) are the opponents of Stage 6 in Kirby's Avalanche. Their Puyos clear into musical notes. This aspect is shared with their Puyo Puyo equivalent, Panotty. 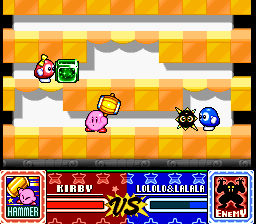 In Kirby Super Star and its remake, Kirby Super Star Ultra, Lololo & Lalala reappear in the Spring Breeze sub-game, a remake of Kirby's Dream Land, as the boss of the Float Islands stage, which was fused with Castle Lololo. In this game, they look and act the same as they did in their debut appearance, but after one of them is defeated, the other sibling speeds up. Due to the addition of Copy Abilities, Kirby is no longer required to spit their boxes back at them, unless he loses his ability or enters the battle without one. To compensate for this, they occasionally push Gordos, just like in Kirby's Dream Land's Extra Game. They are also fought in The Arena and Meta Knightmare Ultra, the latter of which sees them challenged by Meta Knight.

A harder alternate version of Lololo & Lalala, named Lololo & Lalala's Revenge, is found with in Revenge of the King in Kirby Super Star Ultra, serving as the boss of Illusion Islands. The battle is very similar to the previous, just with a different color palette and higher difficulty. There are now five rows to deal with rather than four, and another Gordo can appear in one of the rows by itself, potentially making three rows that Kirby needs to avoid. After one of the duo is defeated, the other sibling speeds up. This variation is fought in The True Arena.

Lololo & Lalala are fought a total of five times in Kirby Super Star Ultra. They are among the few bosses who are not fought in Helper to Hero. They also appear on a card in Kirby Card Swipe.

Lololo & Lalala appear as bosses of the Sub-Game Kirby Brawlball. They are the second of four boss stages, and behave as they normally do — pushing blocks back and forth near the top of the room. Each one is worth 20,000 points when defeated, but if Kirby falls out of the boss board with one defeated and returns, that one will be revived with minimal HP, and only be worth 500 points when defeated again.

Lololo and Lalala appear in the Kirby Fighters games as hazards in the Battle Stage Castle Lololo, which is based on their boss fights from earlier games. They act as they did before, pushing Emerald Framers and Gordos again. If Lololo or Lalala are attacked enough, they will be defeated and will not appear for the rest of the round. The Emerald Framers can also be broken. 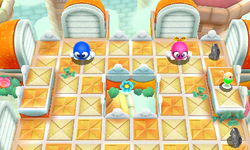 Lololo & Lalala appearing at the end of Level 3

Lololo & Lalala are fought as bosses in this spin-off title. Lololo is first fought by himself in Level 1, then both him and Lalala together in Level 3. The two are also fought in EX form in the EX versions of those levels. The fight is similar to how it has always been, but now takes place in a 3D space. Lololo & Lalala will either push their Emerald Framers or Gordos along, and sometimes will kick them forward instead. In the EX stages, they move faster, and may also push Ruby Framers, which leave a toxic path along the ground that lingers for a short while. Notably, in this game and onward Lalala is now given eyelashes to further differentiate her from Lololo, as well as an extra shine in her eyes.

Artwork of "Fololo & Falala" from Kirby: Right Back at Ya!

In the anime, Kirby: Right Back at Ya!, Lololo & Lalala, referred to as "Fololo & Falala" for unknown reasons, appear as Kirby's friends rather than being hostile towards him. They bear a similar appearance to their in-game design, but Fololo is of a considerably darker shade of blue, whereas Falala is a shade of orange-pink. In addition to these changes in appearance, the two are capable of flight in the anime, and are much smaller than their video game counterparts.

Screenshot from the Adventures of Lolo, where Lololo & Lalala originated