Magic is a Copy Ability debuting in Kirby & The Amazing Mirror, which grants Kirby the ability to perform various stereotypical magic show tricks as attacks. When using this Copy Ability, Kirby dons a magician's top hat, out of which many of the attacks emerge. Although originally a single use ability, it was changed drastically when it returned in Kirby: Squeak Squad, now possessing unlimited uses (for the most part) and a different arrangement of attacks. In both of its appearances, Magic is obtained by swallowing Boxy or by finding the correct Copy Essence. 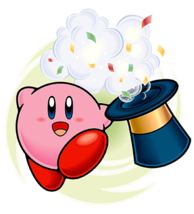 In Kirby & The Amazing Mirror, the Magic ability can only be used once; thus, as with other limited use abilities, Kirby's appearance does not change until he uses the ability, but he continuously flashes while possessing it. Upon activating Magic, Kirby conjures up a top hat and a roulette of different, randomly chosen icons appears on the screen, which can be stopped by pressing the ability button again, but will also eventually stop by itself if no button is pressed. The ability's ultimate results depend on the icon that the roulette stops on, with the following possible outcomes:

It should be noted that invincible enemies, such as Gordos, Shotzos and Twisters in tornado form are not affected by Magic. Once the effect has taken place, the ability disappears.

Like other abilities with limited uses, Magic does not appear in the ability room unlocked after completing the game. 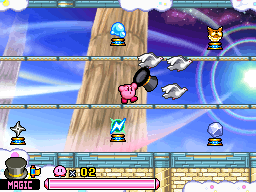 Kirby releasing doves from his hat as one of the Magic ability's attacks.

In Kirby: Squeak Squad, the Magic ability was changed into a permanent Copy Ability, which includes actual attacks. It appears in various locations, mostly inside bubbles. The scroll for the Magic ability can be found in a Treasure Chest in the fourth section of the Secret Sea and enables Kirby to use the ability's roulette effect from Kirby & The Amazing Mirror (although this does end Kirby's use of the ability, like before.)

In Kirby: Triple Deluxe, Magic Kirby appears as one of the collectible keychains, though not as an ability in the game proper.

In Kirby Star Allies, Magic Kirby appears on "The Great Labyrinth Battle" Celebration Picture, occupying the right side of the picture.