The Great Sea Slug Monster[Japanese title] is a fictional monster that appears in the Kirby: Right Back at Ya! episode Un-Reality TV. It is presented to the citizens of Cappy Town on Channel DDD as a real monster destroying their village, but in reality, it is Escargoon inside a suit.

The Great Sea Slug Monster resembles a sea slug to a degree, but also has characteristics of a sea lion. It is mainly purple in color with yellow markings and orange spikes in place of eyes. It has a mammalian mouth and sharp teeth.

The monster is portrayed as being much larger than the buildings of Cappy Town, and is able to speak, though all it does it repeat Kirby's name. It is also presented as being able to breathe fire. The suit in question is entered via a zipper on the back, and Escargoon complains that it has very poor ventilation. 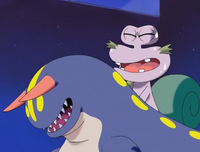 Scene from the anime where Escargoon emerges from the costume.

The Great Sea Slug Monster first appears as part of a "news" bulletin on Channel DDD. Shots of the monster destroying a miniature set made to look like Cappy Town were intended to scare the townsfolk into believing that their village was actually under attack, and because they were so glued to their television screens, they never checked outside to see if it was actually happening. Using this attention, King Dedede hypnotizes the villagers to make them believe that getting rid of Kirby will get rid of the monster, which almost succeeds in driving Kirby out of town.

Later on, Tiff, Tuff, and Kirby intrude on the set while filming is in progress. Kirby runs into the set, revealing the true size of the monster in comparison. From there, Tiff manages to catch film of Escargoon in the suit and broadcast it to Cappy Town, revealing the hoax.