Flamer is a fairly common reoccurring enemy in the Kirby series. It is known for its speed and erratic temperament. First appearing in Kirby's Adventure, this flying eyeball with spouting flame nozzles can be seen rolling along walls, floors, and ceilings, only detaching when it is angered. Flamer prefers to roll in a counter-clockwise motion - thus tending to make left turns rather than right ones - but will change direction under certain circumstances. Once it detaches from its rolling area, Flamer will spin in the air and home in on its target, and then burst forward in a fireball tackle, usually leaving the area after this move is completed.

Flamer was initially known for providing the Burning ability when swallowed by Kirby. In more recent titles, however, it provides the Fire ability, since the two abilities have since merged into one. Flamers usually come in a shade of pink with lighter pink spouts, but can be seen in other hues in certain areas, including blue, green, and yellow. This does not change their behavior. 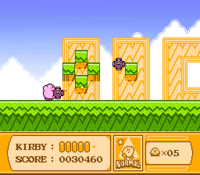 Flamer made its debut appearance in this game, and showcased its main behaviors that it would become infamous for throughout the series. Flamers in this game are capable of moving at various speeds, with some moving blisteringly fast.

Flamer can be found in the following levels and stages:

Flamer appears in this title, spinning in place in various courses. It provides the Fireball ability. In this game, Flamer is always spewing some fire, but this is only aesthetic and it does not hurt Kirby.

In Kirby's Dream Course, Flamer can be found in the following courses and holes:

Flamer appears in this Game Boy title, marking its first and only appearance on a monochrome system. It behaves the same way as in Kirby's Adventure, but is generally slower and less aggressive.

Flamer can be found in the following levels and stages:

Flamer appears as a common enemy in this game, first introduced in Stage 8. It is worth 1000 points when collided with and grants Kirby the Burn ability.

Beam Kirby attacking a Flamer in Kirby & The Amazing Mirror.

Flamer makes an appearance in both of these titles, exhibiting the same look and behavior that it had in Kirby: Nightmare in Dream Land.

Kirby: Squeak Squad marked the first time that Flamer provided the Fire ability instead of Burning. Kirby is able to possess Flamer in this title using the Ghost ability. Doing so allows Kirby to move Flamer along walls and ceilings and change its direction, and also allows Kirby to make use of its hover and flame tackle.

In Kirby & The Amazing Mirror, Flamer can be found in the following rooms:

In Kirby: Squeak Squad, Flamer can be found in the following levels and stages:

Flamer returns as a common enemy in this touch-based game, acting the same as usual. Here, Kirby merely needs to bump into it to gain the Burning ability. This would be the last game in the series where Flamer would provide this original ability.

In Kirby: Canvas Curse, Flamer appears in the following locations:

Flamer appears in yarn form in this title, though it is colored orange. Due to the nature of the game, it cannot provide any abilities, making this the only appearance where Flamer is a neutral creature.

Unlike their previous iterations, Flamers can actually charge in any direction, not just horizontally, and the player has to attack them to make them charge. Just getting near them causes to light on fire, and their only attack is by contact before the player whips them. After it attacks, a Flamer leaves the area, just like in Kirby's Adventure. As shown in Treat Land's Dark Manor, Flamers can use their flame to light up the area around them.

Flamer can be found in the following levels and stages in Kirby's (Extra) Epic Yarn:

Flamer appears in the Kirby Mass Attack Sub-Game Strato Patrol EOS, serving as one of the regular enemies that will attempt to fly at the Kirbys.

Kirby jumping past a Flamer on the platform he leapt from in Kirby's Return to Dream Land. Flamer's cousin Elec can be seen on the other platform.

Kirby's Return to Dream Land marked Flamer's first appearance in 3-D. Its behavior is still the same as ever, though it does benefit from increased durability, and if hit by a minor attack, will merely drop down to the next available floor or wall rather than getting angry immediately. This game also introduced Flamer's nearer and further cousins Elec and Searches.

In Kirby's Return to Dream Land Flamer can be found in the following levels and stages:

In addition to its appearances in the games feature in the collection, Flamer appears in some of the New Challenge Stages, bearing its look and behavior from Kirby's Return to Dream Land.

Flamer would reprise its role exactly as before in the follow-up games of Kirby: Triple Deluxe and Kirby: Planet Robobot, though with the added ability to move in-between the foreground and background when angered.

In Kirby: Triple Deluxe, Flamer can be found in the following levels and stages:

In Kirby: Planet Robobot, Flamer can be found in the following levels and stages: