The Island Sisters are a pair of tiny twin fairies from Kirby: Right Back at Ya! who live with Mosugaba on the Embrya Island in the South Seas. They have a peculiar bond with the giant monster Mosugaba, and have the power to both summon and calm the giant insect using their singing. To take advantage of this, the Island Sisters are kidnapped by Night Mare Enterprises and forced to call Mosugaba to Dream Land for King Dedede. After causing a stir in the kingdom, Tiff, Tuff, and Kirby reunite the sisters with Mosugaba and they return to their island in peace.

The Island Sisters are based on the Shobijin from the film Mothra.

The Island Sisters are two tiny twin girls with sparkling eyes and tan skin. They wear a rough two-piece outfit and have long light-blue hair with blossoms on their heads, as well as orange hoop earrings. Their anatomy is similar to Tiff's, as they have defined arms and hands, but only two stubby green Kirby-like feet and no legs.

The Island Sisters either speak in unison or finish each-others' sentences, and only desire to live in peace on Embrya Island with Mosugaba. They have the ability to both summon and calm Mosugaba using their singing, which can be heard by the creature from extreme distances.

In the Japanese version, the song that the Twin Nuts sing to Mosugaba has very peculiar lyrics. It is based upon "Mothra's Song", and while describing characteristics of Mosugaba, it also contains references to both Nintendo and HAL Laboratory. The lyrics are as follows:

The line "you are also a flying angel" is transcribed from Japanese as "do-tennin". This word is an anagram of the word "Nintendo". The lyrics also reference HAL Laboratory's two branch offices: their headquarters in Kanda, Tokyo, which they had recently moved to at the time of Caterpillar Thriller's Japanese airing, and their second building in Yamanashi.

In the Japanese version, three different arrangements in instrumental form play as Mosugaba turns into a butterfly, attacks Kirby (which reappears as "Evade and Dig and Dash" in Kirby and the Rainbow Curse), and after it's calmed by the Island Sisters' singing, respectively.

The song reappears in instrumental form in Kirby and the Rainbow Curse, as "More Dig and Dash". Instrumental arrangements of the same song also appear in Kirby Mass Attack, as "Desert Scorcher" and "Lifted Upward," respectively. 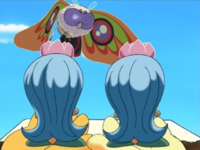 The Island Sisters use their singing to calm Mosugaba after they are freed.

In Caterpillar Thriller, the Island Sisters are kidnapped from their home on Embrya Island by Night Mare Enterprises. From there, they are sent through the Monster Delivery System in a cage to Castle Dedede, and King Dedede commands them to summon their guardian monster to Dream Land using their singing.