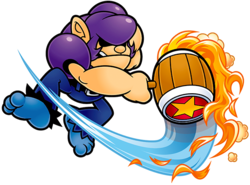 Bonkers, one of the most well-known Mid-Bosses.

Mid-Bosses (also called Mini-Bosses[1]) are a major part of the Kirby franchise found in almost every game of the Kirby series. Mid-Bosses are enemies larger than most regular enemies but smaller than most Bosses that appear in the worlds that Kirby travels through. Once Kirby enters the small area in which a Mid-Boss is located, he cannot proceed or go back until his opponent has been defeated (with a few exceptions), which usually takes longer than beating a regular enemy. Mid-Bosses also typically give out Copy Abilities, but these can only be obtained after Kirby has knocked them out, enabling him to inhale and swallow them (in Kirby Star Allies and Kirby and the Forgotten Land they are guaranteed to drop the Copy Ability hats even if their bodies are destroyed). Their name comes from the fact that they are similar to bosses, but are found in the middle of the levels.

Like most bosses, Mid-Bosses will drop debris, conjure minions or cause Drop Stars to appear when they attack, giving Kirby means to fight back if he has no Copy Ability.

It is not always clear what separates a Mid-Boss from other types of enemies. The following will attempt to outline the most common differences that distinguish Mid-Bosses as their own category.

Keep in mind that these distinctions are not universal, and exceptions exist throughout the series. They do however fit most circumstances.

This is a list of mid-bosses that have appeared throughout the Kirby series.

All Mid-Bosses faced in this game are larger versions of regular enemies, and typically don't have any special moves, but continually spawn smaller enemies to defend it. There are a couple exceptions to this, those being the enemy ambushes, which are also denoted with a health bar. Unlike other Mid-Bosses, they cannot be inhaled, but almost always drop a Crystal Shard when defeated for the first time.

Other official names for each "Big" Mid-Boss are the same as their smaller counterparts, but with the prefix 'deca'. Example: Decaburnis is the mid-boss version of Burnis.