Level 8: Another Dimension is a dark realm in Kirby's Return to Dream Land where the final boss battles are fought. Kirby, Bandana Waddle Dee, Meta Knight, and King Dedede are taken to this stage after Magolor tricks Kirby into helping him take over the universe. Here, Kirby fights Magolor to help preserve not just Popstar but the entire universe's sovereignty. The level progresses directly after the final events of Dangerous Dinner, and all four heroes partner up with Landia to fly through this level, in a shooter-style vain that is tradition to most Kirby games.

The stage music track for Another Dimension is titled 飛べ！星のカービィ (Fly! Kirby of the Stars), the same title of the final episode from Kirby: Right Back at Ya! in Japanese.

The theme is an electronic track that consists of the following sections:

The theme plays in every side-scrolling shooting stage, including the boss battle with the Lor & Magolor.

The theme can be found as Track 82 in the Kirby's Return to Dream Land Sound Test.

The theme is reused for the final battle with Shadow Kirby on the Another Dimension Battle Stage in Kirby Fighters, a Sub-Game of Kirby: Triple Deluxe. It also reappears remixed in Super Kirby Clash when fighting Parallel Susie in her two Quests.

Kirby and Landia fly through a cave made of strange material as Doomers cling to the walls.

The level begins in an empty void with a background reminiscent of the alternate dimensions that Kirby has traversed up to this point. Small winged creatures known as Doomers fly in to fire at Landia and his escort, but can be easily dispatched. Soon, more types of Doomer are encountered as a cave made of a strange starry substance becomes apparent. Parts of the cave move back and forth in a motion that can crush Landia if he is not careful. Once the main section of cave is passed, giant Doomers appear that split into missiles when defeated. Landia then proceeds to the next stage.

The stage begins with another empty void. Large invulnerable pulsing crystals begin flying in from the right that must be avoided. As a last resort to avoid getting hit, Landia can perform the Spiral Dragon technique to pass through them. More Doomers appear in ambush among the crystals. The next cave that is reached requires that switches on the walls be shot to open up. Soon, many more similar gates emerge upon more obstacles. From there, more crushing walls must be navigated through, becoming more and more dangerous as progress is made. After that, truly massive crystals must be avoided, and Landia moves on to the next stage from there.

If Extra Mode is being played, the level begins with Stage 2, and then Landia progresses to this stage. The Main Mode does not feature this stage at all.

The stage begins with an empty void. A bunch of Doomers then attempt to ambush Landia in front of another switch wall. Opening the wall leads to a cave with many wall Doomers firing. Walls move in carrying even more of them, which soon fills the stage with bullets. From there, the cave becomes very narrow, with more Doomers getting in the way. After that, walls move in to make traversing past floating crystals more difficult. Once Landia leaves the cave, it's a tight squeeze past many many giant crystals. After that, Landia proceeds to the next stage. 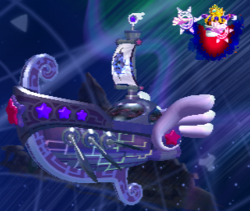 Magolor summons the Lor to fight Kirby and Landia.

Upon entering the next void, Landia is set upon by Magolor, who proceeds to call the Lor Starcutter out from a rift, bearing much darker colors. The ensuing fight begins as the Lor fires shots from its emblem, uses its wings as boomerangs, uses its oars as homing projectiles, and fires a vortex from its mast. It can also raise its shields and charge directly forward to deal damage.

Once the Lor's health is half-way down, Magolor kicks it into overdrive, and it starts firing giant energy balls at Landia, the color of which determines its attack pattern. The Lor will also launch into the background and fire from there. It will also perform a spinning whirlwind maneuver to try and catch Landia. Once the Lor goes down, Magolor grows frustrated and warps away, prompting Landia to make pursuit and trigger the next cinematic. 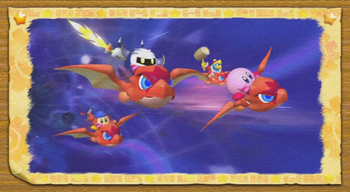 As Landia and his crew charge after Magolor, the crowned villain prepares energy orbs which he fires at them. Meta Knight is able to successfully deflect them with his blade. Magolor intensifies his attack, and manages to hit all of them out of the sky, causing the heores to plummet to a blue bubbling landscape below.

The stage begins in a flat area with numerous flashy spacey effects and a ground made of a bizarre blue smoke. Kirby keeps whatever ability he had prior to defeating Landia in the previous level, but is also presented with the Spear, Spark, Fighter, Water, Whip and Sword abilities on Copy Essences. To the right, the door to the final boss room floats above the ground.

Upon entering the boss chamber, Magolor appears, creating dark orbs around him that explode in the background in a flashy entrance and the fight begins. Magolor's primary attack is to throw these dark orbs at Kirby in various patterns, which can be deflected, as shown in the cinematic. He can also make spikes pop out of the floor, and jump into the background to fire powerful blasts of energy. As the fight progresses, he will open up a rift to summon Doomers to assist him. All the meanwhile, a portal to Pop Star can be seen moving into place in the background.

Once Magolor is down to half health, he jumps into the background and creates a vortex in the middle of the stage in an attempt to suck Kirby into a realm of pure pain. Kirby can avoid this fate if he runs hard enough away. Magolor will also summon a super beam that covers the entire ground in its wake.

Once his health is almost depleted, Magolor will jump into the background again and summon a star-shaped shield around himself to protect from further attack. He will then summon enemies into the stage to attack Kirby, some of which can provide the various Super Abilities. Magolor will continue to fire orbs from the background, but once he is in the foreground, Kirby has to use that chance to hit him with his super technique to damage the shield. Every two hits, Magolor will create a shock wave to dispel Kirby's ability, and he will have to get a new one. When Magolor only has one shield point left, the last ability to appear will be Ultra Sword. Once Magolor's shield is gone, he will attempt to charge one last move, and Kirby has this chance to make his final strike. However, Magolor will attempt to block this, and the player will need to shake the Wii Remote or tap the + Control Pad rapidly to ensure the strike goes through. That done, Kirby makes several more strikes, then grows the sword to tremendous size for one final mighty blow, finally defeating Magolor, who bursts and annihilates.

However, the fight is not over yet. The Master Crown's power is such that Magolor is revived into an even larger more menacing ghostly form (known as Magolor Soul in Extra Mode). Magolor opens up by dispelling Kirby's Ultra Sword, then comes in, juggling various enemies and throwing them at Kirby. Among his attacks are, the ability to summon spikes from all over the stage, fire dark orbs from any direction, travel through rifts at lightning speed, fire the super beam that he could before, and creating a stencil that transforms into a wall of pain on the stage.

Once he is reduced to half health, he jumps into the background, then proceeds to begin using his own versions of the various Super Abilities. He will also fire his super beam into rifts, then cause it to systematically travel all over the stage. Defeating Magolor in this form causes him to disintegrate and return to his normal form. The crown will then levitate off his head and shatter, causing Magolor to implode in on himself and disappear. This triggers the game's final cinematic, then the credits.