This article is about the green electrical copy ability that first appeared in Kirby Super Star, and should not be confused with Spark.

Plasma is a Copy Ability introduced in Kirby Super Star. The Plasma ability allows Kirby to charge up and fire beams and waves of electricity at various levels of strength, depending on how much energy has been built up. At maximum power, these shots are capable of going through walls and enemies alike, though charging them up requires the player to mash rapidly on the D-pad or analog stick.

In most iterations, Plasma is capable only of firing shots forward, but in Kirby Star Allies, shots can also be fired upward. Upward shots however do not pass through walls or ceilings.

In Kirby Air Ride, Plasma's shots have homing properties, but the ability is limited-use (like every other ability in that title), with the more powerful blasts causing the ability to be lost faster than lower-level ones.

In most titles where Plasma appears as an ability, it is provided by Plasma Wisp, who can also appear as the Helper for the ability. In Kirby Star Allies, Plasma is provided and represented by Plugg. When obtaining this ability, Kirby gains a jagged diadem with a green circular gem inset, topped by green frizzy energy that resembles flames. Kirby also may turn green when equipping this ability in earlier installments such as Kirby Super Star Ultra.

Although never appearing in the same titles together, Plasma and Spark have shared attributes numerous times in the Kirby series. The hats are similar, though Spark's is typically less green. In Kirby's Return to Dream Land, Spark had gained an expanded move-set for the first time, and many of those moves were directly based on Plasma, giving the impression that the two abilities had been fused into one. This was seemingly solidified as Spark returned in Kirby: Triple Deluxe and Kirby: Planet Robobot with the same attributes. This trend was broken, however, when Plasma returned in Kirby Star Allies, gaining a number of new abilities. One of the most notable examples is that Plasma now maintains a constant barrier when charged to at least medium, which resembles Spark's, as it can damage enemies. As such, unlike Fire vs Burning and Ice vs Freeze where the latter was incorporated into the former, it is unclear what relationship Spark and Plasma will have in future titles. 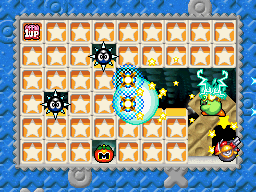 Plasma made its first appearance in Kirby Super Star, replacing Spark and provided by the enemy Plasma Wisp. In this game and its remake, Kirby Super Star Ultra, the ability also changes Kirby's body color to lime green.

In these games, all Plasma attacks do electric damage, except the hand hitbox of Plasma Needle/Arrow.

Plasma returns in this action racing spin-off game, and is once again provided by Plasma Wisp. Like other abilities in this game, it is limited use, being used up after a sufficient amount of time passes, or a sufficient number of attacks are performed. Unlike other abilities, the number of times Kirby can attack depends on the power level of the shots he fires. Like in Kirby Super Star, there are five levels of charge, though there is no Plasma Barrier this time around.

Interestingly, the instruction booklet refers to the plasma attacks as a "bomb", even though none of the attacks act like proper bombs would.

Plasma returns in Kirby Star Allies after a long absence from the series, this time being provided by Plugg. It once again replaces the Spark ability, though it has been given new moves based on Spark's appearance in prior titles. Plasma provides the Zap element like other electric-based abilities. In addition, Plasma has its signature Friend Ability: Thundersplash, which requires Plasma + any Splash element attack.