Plasma Wisp makes its debut appearance in Kirby Super Star and also appears in Kirby Super Star Ultra. Plasma Wisp hovers around an unfixed area, projecting blasts of energy towards Kirby. It uses stronger attacks if Kirby is farther away. In its helper form, it possesses all the abilities of Plasma Kirby. When Kirby swallows it, or scans it with the Copy ability, he receives the Plasma ability.

Notably, Plasma Whisp differs from other helpers in that it can hover in the air instead of using Infinity Jumps, similar to NESP and Vividria from Kirby Star Allies. It is the only helper capable of doing so in Kirby Super Star and its remake. 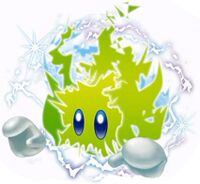 Plasma Wisp makes its first 3-D appearance in this game. It does not do much aside from floating about in a fixed area on race courses or in Kirby Melee. If swallowed by Kirby, he is granted the Plasma ability.

In Kirby Air Ride, Plasma Wisp can be found in the following places:

In Kirby: Triple Deluxe, Plasma Wisp appears as a randomly-appearing keychain. Here, its sprite from Kirby Super Star is used.

Plasma Wisps appear as enemies in the 3DS-exclusive mode, Smash Run. They act much the same as they did in Kirby Super Star, and take a few hits to send flying.

In the Wii U version, a shadowy version of Plasma Wisp appears in several places during the Master Fortress fight.

In Super Smash Bros. Ultimate, Plasma Wisp is a novice Support Spirit that can appear on the Spirit Board at random times. He takes up two support slots and gives the host fighter the Hothead item at the beginning of a battle.