Wing is a Copy Ability which debuted in Kirby Super Star. It allows Kirby to fly quickly through the air, as well as perform several graceful wing maneuvers, dive-bombs, and charge attacks, along with the somewhat less graceful Feather Gun attack, though this attack can be used to cut ropes and other such obstacles. Typically provided by Birdon, this ability grants Kirby a bright yellow feather headdress and red stripes in place of his normal cheek marks (though the stripes have not been seen since Kirby Super Star Ultra). Wing Kirby's superior speed makes this ability the obvious choice for rushing through stages quickly in most games it appears in. It also was given the Bluster effect in Kirby Star Allies, being able to impart allies' weapons with the element. 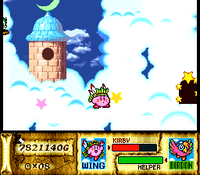 Kirby with the Wing ability in Kirby Super Star. 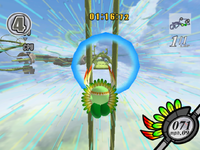 The Wing ability appears in Kirby Air Ride, and can be obtained from the enemy Flappy. When Kirby gains this ability, he temporarily eschews his Air Ride Machine and flies with the ability along the race track at high speed. While in possession of the ability, Kirby gains considerable agility and flight power, and can perform a spinning dive when using a Quick Spin, though he loses access to the boost technique. After a short time, Kirby loses this ability and returns to normal.

Meta Knight has permanent access to flight in a similar fashion to the Wing ability.

In Kirby's Return to Dream Land Deluxe, Wing Kirby's hat was given a slight redesign. The wings were changed from two pairs of lighter wings to a single heavier pair. In addition, the feather crown has had its shape changed (most notably in the back, now resembling an additional smaller green set of wings that aren't used in flight) and a small red gem has been added to the crest, making the hat resemble many of Kirby's other elemental hats such as Fire, Water, or Spark. The pattern on the crest has also been changed.

Wing Kirby makes an appearance in the New Challenge Stages, where it functions identically to the way it did in Kirby's Return to Dream Land. There is a challenge stage dedicated to the ability, and it can also be used in most of the Magolor race stages.

Wing returns in this game, more-or-less the same as it was in Kirby's Return to Dream Land. Birdon reappears to provide the ability.

Wing returns in this title, along with Birdon as a Friend. Wing can imbue other abilities with the Bluster Power Effect, and can also be used in conjunction with Fire or Burning Leo to perform Rising Sizzler. Aside from this, it remains relatively unchanged from its appearance in Kirby: Triple Deluxe.

The Wing Copy Ability makes only one appearance in Kirby: Right Back at Ya!, in the episode Waste Management. Here, Kirby gains this ability by swallowing an errant crow feather and uses the ability to attack Crowemon and his crow army. He uses the Feather Gun to shoot several crows out of the sky, and he then uses the Condor Head technique to strike Crowemon and free Dyna Chick from the giant monster bird's clutches. Aside from these two attacks, Wing Kirby's main ability is flying rapidly through the air.