A 1-Up,[1][2][3] also formatted as 1 Up[4][5] or 1UP,[6] is a high-value item in the Kirby series which appears in all main-series titles (sans Kirby and the Forgotten Land) and many of the spin-offs. When picked up, the player is rewarded an extra life, which will be used up in exchange for another try if the player's character is defeated.

In all of its appearances, the 1-Up resembles or otherwise contains bold white text which reads "1UP". Starting with Kirby Super Star and consistently since Kirby: Nightmare in Dream Land, its current appearance also includes a glowing aura and a replica of Kirby (or sometimes another character) behind the text.

1-Ups can be obtained in a variety of ways which can differ between games, or may simply be found out in the open in stages, though they are often tucked away in difficult-to-reach or hidden places. 1-Ups are also rewarded by collecting a prerequisite number of Point Stars (100 in modern titles) in games which feature them. They are also usually found hidden behind Star Blocks in HAL Rooms. Most Kirby games tend to be fairly generous with 1-Ups, to the point where a skilled player can amass many tens or hundreds throughout a playthrough. This is usually counterbalanced by the fact that the number of extra lives is reset when the main game is exited (though this does not happen in Kirby Star Allies). For details on what happens when the player runs out of extra lives, see the Game Over page.

This familiar jingle plays whenever a 1-Up is collected (Kirby's Return to Dream Land version).

In Kirby's Dream Land, Kirby begins the game with the extra life counter reading "04" (00 counts as a life), meaning he starts with five lives. Despite the double-digit counter, it cannot go higher than "09" in this game. The only way to obtain more extra lives in this game is to find them in stages or to adjust the number in the Configuration Mode (which can also be used to give Kirby less lives to start with). 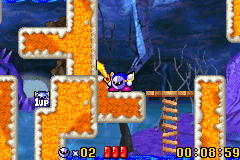 Meta Knight finds a 1-Up styled after himself in Meta Knightmare, from Kirby: Nightmare in Dream Land.

In Kirby's Adventure and its remake Kirby: Nightmare in Dream Land, Kirby begins the game with five lives. Unlike in the previous title, the extra life counter can go into the double digits. In addition to finding 1-Ups in stages, Kirby can also obtain them by reaching the highest platform in the Goal Game, and completing the various Sub-Games (details on thresholds for 1-Up bonuses can be found on the Crane Fever, Egg Catcher, Quick Draw, Kirby's Air Grind, and Bomb Rally pages). If Kirby lands on all platforms from lowest to highest in consecutive Goal Games, he will earn 30 1-Ups as a secret bonus. This secret has been retained in many subsequent games.

Starting in Kirby: Nightmare in Dream Land, 1-Ups use their look from Kirby Super Star consistently. In Meta Knightmare, the 1-Ups are modified to resemble Meta Knight instead of Kirby. Unlike in the main game, Meta Knight only starts with three extra lives in this mode and cannot make use of Goal Games or Sub-Games to get more.

In Kirby's Pinball Land, Kirby starts with three lives, which are represented by small Kirby icons in the top-left corner of the screen. The maximum number of lives Kirby can have is nine (represented as eight of the aforementioned icons, since zero counts). 1-Ups in this game do not appear as items, but are instead rewarded for getting a sufficiently high score in the bonus boards or by hitting all the letters that spell out "EXTRA" on the level hub board. Unlike in other titles, it is expected for the player to eventually run out of lives in order to finish the game and submit their high score, as otherwise the game loops indefinitely.

1-Ups are awarded in Kirby's Dream Course by scoring holes-in-one.

In Kirby's Dream Course, Kirby starts the main game with three lives. Additional lives can be earned by scoring a hole-in-one. If Kirby completes a course with less than three lives, he will be restored to three when starting the next course.

In Kirby's Dream Land 2, Kirby starts the main game with three lives. Aside from finding 1-Ups scattered through stages, they can also be earned by reaching the top platform in the Goal Game, by collecting seven Point Stars, and by earning a perfect score in Bonus Chances.

In Kirby's Block Ball, Kirby starts each level with five extra lives. More can be earned for every 50,000 points obtained in the level, by hitting every Star Block in the Target-Shooting stages or by playing the Sub-Games accessible via Warp Star in each level (details on thresholds for 1-Up bonuses can be found on the Up Cloud, Up Down, Star Catcher, and Air Hockey pages). unlike most other titles, Kirby does not keep any extra lives after completing a level, instead exchanging each one for 1000 extra points.

The modern look of 1-Ups first manifested in Kirby Super Star. In both the original and Kirby Super Star Ultra, 1-Ups can be found throughout stages as normal, and can also be awarded in one of the Goal Games. Each main game starts Kirby (or Meta Knight) with four lives. Gourmet Race, The Arena, and The True Arena do not utilize extra lives.

In Kirby's Dream Land 3, Kirby begins the main game with three lives. More can be earned by obtaining 30 Point Stars or by collecting 1-Ups in stages. They can also be earned in the Goal Game.

In Kirby 64: The Crystal Shards, Kirby begins the main game with three lives. More can be earned by obtaining 30 Point Stars or by collecting 1-Ups in stages. They can also be earned in the Bonus Game.

Collecting a "3up" in Kirby Tilt 'n' Tumble.

Performing eight bounces in a row on enemies and objects like Bumpers will also grant Kirby invincibility and give him a 1-Up. While invincible, Kirby can slam Bumpers and enemies off the stage to earn 1-Ups, before the effects wear off. Landing in the center of the stage goal will also grant Kirby a 1-Up. Playing the Sub-Games on the Bonus Star can also grant 1-Ups, with up to three being rewarded based on the score earned in the game.

In Kirby & The Amazing Mirror, Kirby begins with three extra lives. More can be earned by finding them scattered throughout stages, opening specific Treasure Chests, or occasionally getting them as a gift from other Kirbys when calling them on the Cell Phone. Kirby can also get a 1-Up if he lands on it on the Magic Copy Ability's roulette wheel. 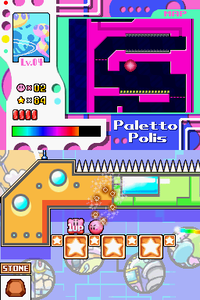 Kirby approaching a 1-Up in Kirby: Canvas Curse.

In Kirby: Canvas Curse, Kirby begins with four extra lives. More can be collected in stages or by collecting 100 Point Stars. More Point Stars (and thus 1-Ups) can be awarded in Dash! Jump! based on the distance traveled.

In Kirby: Squeak Squad, Kirby begins with four extra lives. More can be collected in stages or through the Goal Game. Additionally, combining three Kirby icons together in the Copy Palette yields a 1-Up.

In Kirby's Return to Dream Land and all the following main-series games up to Kirby Star Allies, Kirby begins with eight extra lives, and more can be collected by finding them in stages, by collecting 100 Point Stars, or through the Goal Game.

In Kirby's Return to Dream Land, when an ally joins the game, an extra life is subtracted from the total (unless it is currently zero, in which the ally starts with half of their health). In that game's Extra Mode, 1-Ups get a small crown added onto the head of the Kirby figurine.

In Kirby Star Allies, the extra life counter in Story Mode does not reset with the game. Obtaining 1000 extra lives places a crown on Kirby's stock icon.

In Kirby and the Rainbow Curse, Kirby begins with six extra lives. More can be collected in stages, by collecting 100 Point Stars, or through the Goal Game. Collecting a 1-Up in a stage also awards 500 points.

An aspect unique to this title is that players have the option to skip stages they are having too much trouble with. This can be done if four or more lives are lost on the stage in question.

1-Ups themselves do not feature in Kirby Fighters 2, nor is there an extra life system for most of the game's content. However, Kirby is given three lives in the Final Chapter of Story Mode: The Destined Rivals. Unlike in other games, there is no way to increase the number of lives in this case, meaning that Kirby and his buddy have three tries to complete the final chapter.

The following games in the Kirby series do not include 1-Ups or any other form of extra life system: