This article is about the Copy Ability. For the enemy object, see Parasol (enemy).

Parasol is a Copy Ability that equips Kirby with a parasol (umbrella) to use as a weapon. Contrary to what might be expected, the Parasol is a formidable tool when in Kirby's hands. He can swing it to strike enemies with the same force as a Sword, and use it to shield himself from incoming projectiles ahead or above him. Additional techniques include the very fast and dangerous Parasol Drill and Dive, and the famous Circus Throw technique, where he picks an enemy up and spins it on his parasol before tossing it away. Kirby can also use his Parasol to splash water on fiery blocks and foes to douse them. When not attacking with it, Kirby can use the parasol to glide through the air, drifting slowly downward while gaining increased horizontal velocity. Lastly, Parasol is one of the abilities that can usually be used underwater.

Parasol is typically obtained by swallowing the Parasol often held by Waddle Dees and Waddle Doos, but there are a small number of more specialized enemies that provide it, including Floaty the Drifter, Jumper Shoot, Sasuke, and Klinko. Parasol is the only modern Copy Ability which does not grant Kirby a hat or any additional costume piece. In addition to being one of the first Copy Abilities to appear (first appearing in Kirby's Adventure), it is also tied with Cutter as the most ubiquitous ability in the whole Kirby series, appearing in 18 games and counting. 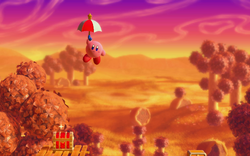 With the Parasol ability, Kirby will naturally drift gently downward with his parasol open, swaying in the breeze.

Parasol is one of Kirby's simpler and yet more versatile abilities. Its primary attribute is the ability for Kirby to shield himself from attacks from above (even when hovering), and the ability to float gently downward in the air. Some games employ wind currents which can influence Kirby's trajectory when he is drifting on his Parasol, even carrying him upward in some cases. It is also one of the few abilities which can be used underwater, though its utility there is more limited. Starting in Kirby Super Star, Parasol would gain more of its signature properties, including its special guard, its drill attack, and its Circus Throw technique.

Starting in Kirby Super Star, but not becoming prominent until Kirby's Return to Dream Land, Parasol would gain a distinct watery property, as Kirby will now throw water drops off the Parasol when he swings it which can douse flames and cool lava blocks. This increased reach also makes it possible for Parasol Kirby to consistently hit enemies and objects through walls, though not with as much reach as other abilities like Yo-Yo or Whip. The watery properties of Parasol also allow Kirby to grant the Splash Power Effect to his allies in Kirby Star Allies.

Although Parasol is one of the most frequently-reoccurring abilities in the series, it does have a few noteworthy absences in the main series, those being Kirby 64: The Crystal Shards and Kirby and the Forgotten Land.

Kirby using the Parasol ability to float through the air in Kirby's Adventure.

Parasol makes its first appearance as a Copy Ability in Kirby's Adventure, and also appears in Kirby: Nightmare in Dream Land. Here, its essential properties of being used as a bludgeon, shielding Kirby from hazards above him, and being used to float slowly downward were established. This makes it one of the more versatile abilities in the game. It is only provided by Parasol Waddle Dee and Parasol Waddle Doo.

While Parasol does not appear as a Copy Ability in Kirby's Pinball Land (since Copy Abilities do not exist in this game), a Kirby holding a Parasol does appear on the Kracko Land board, pulling the Parasol out when Nimbus rains on him, and can help Kirby get to the upper portion of the board. 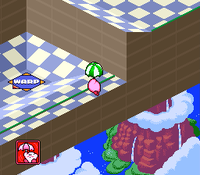 The Parasol ability appears in Kirby's Dream Course, where it can be obtained from Parasol Waddle Doo. While using the ability, Kirby floats through the air using the Parasol, and can gently be steered toward the ground for a more precise landing. How quickly Kirby drifts laterally through the air depends on how fast he was going when he activated the ability. This can also be used to brake Kirby's momentum while rolling on the ground.

Parasol reappears in Kirby's Dream Land 2. Kirby acquires this ability from Jumper Shoot and Floaty the Drifter. By itself, this ability performs similar to the one in Kirby's Adventure.

Throughout Kirby's Dream Land 2, there are specific blocks which can be broken only with the Parasol ability. They resemble puffy clouds.

Kirby hovering while carrying a Parasol in Kirby Super Star.

Parasol returns as an ability in Kirby Super Star and Kirby Super Star Ultra, where it is once again obtained by swallowing an enemy Parasol. However, it can also be received via Copy Essence Deluxe in Milky Way Wishes and through regular Copy Essences. With the Parasol equipped, Kirby can create a Parasol Waddle Dee as a Helper. This game introduced some of the more elaborate attacks that Parasol has become known for, such as Parasol Drill and Circus Throw. This game also introduced Parasol's ability to douse flames by splashing water on them. 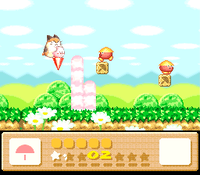 Parasol makes another appearance in Kirby's Dream Land 3. It functions similarly to its previous appearance in Kirby's Dream Land 2, and can be acquired from Sasuke, Klinko, Jumper Shoot and the parasol variant of Bukiset. When Kirby or Gooey try to crouch with this ability, instead of crouching, they put their parasols in front of them similar to a guard, which deals damage to enemies and provides cover of any incoming projectile. Their backs aren't covered, however, so any attack coming from behind will hurt them as usual. While this defensive technique isn't available when paired with Animal Friends, being paired with them creates Parasol-related abilities, as follows:

Parasol returns in Kirby & The Amazing Mirror, unchanged from its appearance in Kirby: Nightmare in Dream Land. It is once again acquired by swallowing an enemy Parasol.

In Kirby: Squeak Squad, an Ability Scroll can be collected for Parasol which allows Kirby to make his Parasol Shield bigger, turning it into the "Super Parasol Shield" (スーパーパラソルシールド[1]), by firing small stars if he holds it for an extended time.

Parasol being used in its challenge room in New Challenge Stages.

In the Sub-Game New Challenge Stages, Parasol gains its own challenge room, accessible from Happiness Hall. It can also be used to race Magolor.

Parasol returns in Kirby: Triple Deluxe, largely unchanged from its appearance in Kirby's Return to Dream Land, however it's been given one change in this game onwards. Specifically, the animation of Parasol Swing more closely resembles its animation from Kirby Super Star, granting it a hitbox behind Kirby after he winds back the parasol. In addition to its role in the main game, Parasol is a selectable ability in the Kirby Fighters Sub-Game.

In Kirby: Planet Robobot, Parasol can be combined with the Robobot Armor to produce the armor's Parasol Mode. This mode allows the suit to fly great distances using parasol-shaped rotors and dispel clouds of poison gas.

In Kirby Star Allies, Parasol can be used to imbue other abilities with the Splash Power Effect. It can also be used to activate Chumbrella, being one of the few Friend Abilities which does not require help from any friends. Parasol Waddle Dee acts as the Friend for the Parasol ability, and can use all of the same moves as Parasol Kirby.

Parasol is one of the selectable abilities in Kirby Battle Royale. Its moveset has been altered to account for the top-down perspective of many of the game modes. In Dedede's Cake Royale, Kirby must first acquire 150 League Points before he can use the ability.

Parasol Kirby has three alternate costumes in this game, those being the Bouncy Umbrella, the Paper Parasol, and the Fancy Umbrella.

Although the Parasol ability does not appear in the Super Smash Bros. series, an item version makes an appearance in Super Smash Bros. Melee, which functions in a similar manner when held by a fighter. This item also receives its own trophy in that game.

In Kirby: Right Back at Ya!, Parasol Kirby makes an appearance on three different occasions. In Cappy New Year, Kirby obtains this ability by inhaling Sasuke in order to safely make it back down to the ground after being launched by a firework rocket high into the sky. In Escargoon Rules, Kirby swallows several Drifters to gain the ability, then uses the parasol to beat back the remaining Drifters and punish King Dedede for initiating the battle. In D'Preciation Day, Kirby gains this ability by inhaling Buttercup's umbrella, then uses the parasol to defeat Chuckie. Parasol Kirby has all of the same skills he has in the games, though the watery aspects of the ability have been removed.