Void Termina is the final boss of Kirby Star Allies. Known as the 'Destroyer of Worlds', he is a being made of pure chaos conjured from the Jamba Heart by Hyness in order to destroy the galaxy, after having been initially sealed within it by four ancient heroes of yore. Having been worshiped as a god by Hyness and his followers, Void Termina is an immensely powerful primal cosmic being who seems only interested in destroying everything he comes across. Void Termina initially appears as a gigantic gorilla-like humanoid, but is capable of changing his form as the battle goes on, with his last form greatly resembling both Kirby and Dark Matter. Kirby & Friends have to battle Void Termina using the Star Allies Sparkler after Hyness sacrifices himself and his Generals of Magic to revive the great beast. 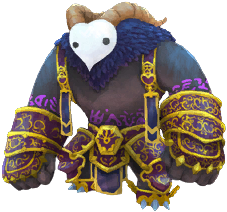 Void Termina takes on several different forms as the battle with him progresses. Initially, he has the form of a giant humanoid figure with exaggerated arms and a heart-shaped mask covering a hole where a head normally would be. He has metal plates which cover his loin and forearms, and is able to generate two giant swords to attack, which makes him look and behave similar to Ganon from The Legend of Zelda: Ocarina of Time. He has a mane of feathers which stretches along his back.

In Phase 3, Void Termina's body shifts as he transforms into a bird-like creature, becoming more slender, growing massive wings, and losing his legs, instead gaining a segmented tail made of hearts.

Later on, Kirby and company climb into Void Termina's body to attack his core. This core can be considered Void Termina's true form, and it resembles a ball of purple energy with a face similar to Kirby's though it changes depending on the attack it is about to use. This form resembles Dark Matter greatly.

Kirby and his allies approach the dark cloud that transforms into Void Termina.

Throughout the majority of the story, Void Termina is locked away inside the Jamba Heart. Hyness attempts to summon Void Termina, but accidentally shatters the heart instead, sending pieces of it all over the galaxy. As the hearts rain down on various worlds, Hyness sends the Mage-Sisters to go and collect them, but run into resistance in the form of Kirby & Friends.

Ultimately, the Mage-Sisters manage to return most of the pieces, but the allies arrives at The Divine Terminus before the heart is fully restored and defeat Hyness and the sisters in combat. As a last resort, Hyness sacrifices the Mage-Sisters and himself into the heart to complete it again, which causes Void Termina to awaken. From there, Kirby has to fight the great beast himself with the aid of Friends and the Star Allies Sparkler. After a grueling battle, Kirby finishes off Void Termina by destroying his body, and sending his allies in to strike at his soul.

Void Termina's battle takes place in an unprecedented five phases. These phases alternate between outside and inside his body. While outside, Kirby and friends fight him using the Star Allies Sparkler. When inside, they fight him on foot using their regular abilities. The last phase of the battle only takes place in Story Mode.

On 'Soul Melter' difficulty of The Ultimate Choice, Void Termina's attacks are slightly different in pattern, becoming slightly more difficult to dodge. He also has a slightly different color scheme on all forms. Additionally, the fourth phase of the battle is replaced with Void Soul.

On 'Soul Melter EX' difficulty of The Ultimate Choice, Void Termina (here referred to as the True Destroyer of Worlds) is even tougher--with a dark color scheme, and his fourth phase is against Void. Additionally, on his first and third phases, his first four weak points all appear at once instead of sequentially.

The arena used in the outer phases appears to be an asteroid with a circular flat top.

A still from Phase 1 of the battle.

The first phase is referred to as the Demon God Form (). Void Termina takes the form of a giant humanoid beast and attacks by punching and slamming the ground to create shockwaves, and can also conjure swords to strike the allies when he is low on health in this form.

Unlike other bosses, Void Termina's Phase 1 and 3 don't have a standard health bar, but a bar divided into 5 parts with one eye on each. Five eyes appear in different spots on Void Termina's body, which are his weak points (corresponding to the eyes on his stamina bar). Firing anywhere else will do nothing. Every time one of his weak points is destroyed, his stamina bar will be depleted by 1 part. Damage to the eyes are represented as shattering segments.

On the Soul Melter EX difficulty of The Ultimate Choice, Phase 1's pause flavor text suggests itself to be actually lyrics of Void Termina's theme:

The second phase is referred to as the First Core (第1コア). After defeating Void Termina's Demon God Form, the body falls over and the mask comes loose, revealing a gaping vortex which the allies enter. Inside, they find a fleshy ball with Hyness and The Three Mage-Sisters wrapped up around it. It is Void Termina's heart.

In this phase, Kirby & Friends attack the core on foot, while avoiding the drops of blood-like liquid that fall from above.

As the core's health is gradually depleted, the sacrificed devotees will be freed one by one in the following order, with food popped out as well:

Once the core's health is completely depleted, four hinges will poke their way out of the core's underside. Kirby & Friends then need to pull on the core's hinges to peel its shell apart. This causes them and the sacrificed devotees to be ejected from Void Termina's body, leading into Phase 3.

In the Infernal Crisis and Soul Melter difficulties of The Ultimate Choice, this phase has different flavor text:

On the Soul Melter EX difficulty of The Ultimate Choice, this phase also has different flavor text:

The Japanese, Chinese and Korean versions also mention that Void was born as the origin of all kinds of chaotic possibilities, including matters such as dream, dark, soul and heart.[1][2][3]

The third phase is referred to as the Angel Form (). Kirby & Friends are picked up by the Star Allies Sparkler once they are back outside. Void Termina then transforms into a bird-like creature and resumes the attack after he revives.

This phase plays out very similarly to the first, but Void Termina's new form offers a heightened challenge for the allies, as he is much more mobile than before.

The fourth phase is referred to as the Final Core (最終コア). Once Void Termina's Angel Form is downed, Kirby & Friends enter his body once more. In place of the old fleshy core, Void Termina now sics the star allies against a sphere of purple energy.

The core's face appears to mimic Kirby's, but it changes shape constantly. It can also take a form that looks very similar to Dark Matter. All Kirby and his friends need to do at this point is attack the core's body directly, but it can release waves of energy that will turn Kirby's friends against him. Kirby will need to either toss a Friend Heart at the affected friends or knock them out and then revive them to bring them back.

Notably, Friend Hearts can also damage Void Termina's core in this phase if tossed in its direction.

The Final Core attacks in a fixed order on loop as follows:

In The Ultimate Choice, however, this phase has different flavor text:

On the 'Soul Melter' difficulty of The Ultimate Choice, this phase is replaced by Void Soul, the soul form of Void Termina's Final Core.

On the 'Soul Melter EX' difficulty of The Ultimate Choice, this phase is replaced by Void, the extra version of Void Termina's Final Core and Void Soul.

Kirby summons all of his allies to deal the final blow to Void Termina.

In this last phase, Void Termina's core is ejected from his body as the latter disintegrates. Kirby & Friends board the Star Allies Sparkler one last time to deal the final blow.

As a last defense, Void Termina's core fires a powerful laser beam, but Kirby fires his own in response. From there, the player must mash various buttons or the control stick in different sequences to allow Kirby to push the laser back at the core in the form of a quick time event. This done, Kirby will then summon all of his allies (including Dream Friends from free updates) and send them at Void Termina's core to finally destroy the deity himself.

In Infernal Crisis of The Ultimate Choice, Phase 5 is not fought, and defeating the Final Core completes the difficulty.

References to other Kirby series entities[edit]

There are a number of different runes and symbols on Void Termina's body. Among them include depictions of:

These runes appear to be an Easter egg.

Void Termina's final core form uses an attack very reminiscent of the Bound Pound attack first used by Drawcia Soul in Kirby: Canvas Curse. It has a similar shape and color to Drawcia Soul as well.

In Phase 5, Void Termina's beam struggle is reminiscent of Flowered Sectonia's own beam struggle against Hypernova Kirby, albeit this time Kirby actually retaliates with his own beam instead of eating the beam and firing it back.