The Head Cold Monsters are a swarm of tiny virus monsters that appear in the Kirby: Right Back at Ya! episode Something to Sneeze At. These monsters cause severe cold-like symptoms in whoever ingests them, acting much like a real virus, though they do not appear to be as easily transmitted to others. King Dedede orders these monsters from Night Mare Enterprises and swallows them on the false assumption that becoming sick with the cold would prove he is not stupid. He later tries to cure himself by shrinking Kirby with a shrink ray and then swallowing him so he can inhale the viruses, but this plan ends up failing.

The Cold Virus Monsters are extremely small spherical creatures that are purple in color. They have angry red eyes and small frills on each side which resemble fingers, which makes them somewhat resemble Sphere Doomers. They have the ability to fly around quickly and swarm targets to attack them, but they do not appear to be dangerous unless swallowed. Once they are inside a target's body, they inflict that target with severe cold-like symptoms that can take weeks to recover from.

While they are orders of magnitude larger than real viruses, the Head Cold Monsters are still the smallest monsters ever depicted in Kirby: Right Back at Ya!, as even when Kirby is shrunk down to the size of a pea, he is still significantly larger than they are.

Role in Something to Sneeze At[edit] 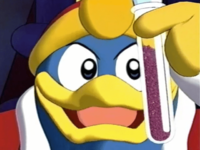 King Dedede examines the Head Cold Monsters he received in a vial before swallowing them.

Main article: Something to Sneeze At

The Head Cold Monsters appear in the episode Something to Sneeze At. Here, the N.M.E. Sales Guy sells them to King Dedede at a premium after the King expresses his desire to become sick with the cold. King Dedede swallows them on a false belief that only intelligent people can be made sick with the cold, and after becoming sick, he runs around Dream Land showing everyone that he caught the cold. As his symptoms worsen, however, King Dedede demands a cure remedy, particularly when he fails to transmit the cold to his Waddle Dees on another false belief that one can get rid of the cold by passing it to someone else.

The N.M.E. Sales Guy offers an expensive remedy which involves sending King Dedede a shrink ray gun called the "Microtizer" and having him use it on Kirby. From there, he swallows Kirby whole and instructs the pink puffball to inhale all of the monsters inside him. Kirby proceeds to do this, but the process causes King Dedede's insides to tickle, which forces him to sneeze, bumping Kirby so hard that he spits all of the viruses out again. From there, another sneeze forces Kirby back out of King Dedede's body, and he shortly reverts to normal size afterward. King Dedede is then left to suffer through his cold, having paid a fortune to accomplish nothing but make himself sick.