This article is about the object that contains Treasure. For the furniture piece in Kirby's Epic Yarn, see Furniture. For the collectable chests in Super Kirby Clash, see Star Chest.

A Treasure Chest is an object which has been featured in several games in the Kirby series. The exact nature of a treasure chest varies between titles, but it always serves the base purpose of holding Treasure and other items of value. Treasure chests first appeared in Kirby Super Star, in The Great Cave Offensive, and most games since then which use treasure chests have used the same concept.

Treasure chests appear as objects in The Great Cave Offensive, with Kirby's goal being to open as many of them as possible before leaving the area. There are 60 of them in total, each with a unique item. Treasure chests can be opened if Kirby is standing in front of one if the player presses up on the D-pad, which will play a small cutscene and display the item that was received. Treasure chests can be made to appear by pressing switches, breaking Bomb Blocks, or defeating certain enemies, and will fall if not supported by a platform. If a treasure chest is lost, Kirby will need to leave the area and then come back again to get another chance at it.

Treasure chests may be found at various points in stages in Kirby Tilt 'n' Tumble. They can be opened by bumping into them to obtain items, including food and keys.

When facing off against a boss for the first time in a stage, a special treasure chest will appear which contains various food items and/or Stopwatches whose value depends on how much time was left before reaching the boss. Kirby can choose one of several items to eat from a roulette prior to facing the boss. 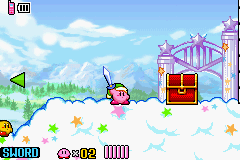 Kirby runs across the first large Treasure Chest in the Mirror World.

Treasure chests can be found scattered all around the Mirror World in this title. Some are large, containing bonus items such as Vitalities and maps, while most are small, containing minor items such as Food and Batteries. Opening every chest, regardless of value, is required for 100% completion of this game.

The central collectable in this title is the Treasure Chest, which Kirby stores in his Copy Palette once he has touched it. In order to open the chest, Kirby will then need to take it to the end of the stage while it is still in his possession. There are a total of 120 in the game, and many of them contain necessary items such as Star Seals, as well as useful items such as Ability Scrolls. If Kirby is hit by any member of the Squeaks while carrying chests, he will drop one, and will have to pick it up again before they do.

Treasure chests come in two different sizes. The larger chests will always cause Kirby to be pursued by the Squeaks when he picks them up, led by either Spinni, Storo, or Doc.

Treasure chests take the form of patches in this title. Kirby needs to use his Yarn Whip to pull them off and reveal the item behind, which could be anything from beads to pieces of furniture for his apartment room.

There is also a piece of furniture that resembles a treasure chest.

Treasure chests can be found at various points in some stages. To open them, the Kirbys will need to find a Key and take it to the chest. They typically contain Medals. There is also a special variety of treasure chest that can be opened using the Skull Key which appears once the Kirbys have defeated the Skully ambush.

Treasure chests appear as common objects in these games, sharing the same attributes and basic look in each one. They can be found either out in the open or hidden behind objects such as containers, grass tufts, and breakable walls. Much like in Kirby Super Star, they are affected by gravity, and will fall if left unsupported. Treasure chests can contain any item, including objects such as Keys and Batteries, or important collectables such as Sun Stones and Code Cubes, or may contain nothing at all.

Unlike previous games, opening every chest is not required for 100% completion, with only the important items inside being a consideration.

In Kirby and the Forgotten Land, treasure chests can also take the form of presents delivered to Kirby's House in Waddle Dee Town, upon entering the correct Present Code. These can hold multiple items.