Kirby Super Star, known as Kirby's Fun Pak in European languages and as Kirby Active during development, is a main-series Kirby game for the Super Nintendo Entertainment System that was developed by HAL Laboratory and published by Nintendo. Unlike other games in the series, it is notable for not following a single storyline, but instead consisting of six different main games, one extra game in the form of a boss endurance mode, and two sub games, each with its own scenario and gameplay elements.

Kirby Super Star is often considered by fans to be the most important game in the Kirby series, as it defined several of the series' most enduring tropes, and its legacy stretches through most if not all subsequent games in the series. Kirby Super Star introduced the idea of giving (nearly) every Copy Ability a distinct hat and an expanded move-set which relies on specific controller inputs like in traditional fighting games. It also introduced several recurring characters (such as Dyna Blade, Chef Kawasaki, and Marx), several recurring abilities (such as Wing, Fighter, and Yo-Yo), and several recurring musical themes (such as the Gourmet Race theme, the full versions of the Green Greens theme and King Dedede's Theme, and the two themes associated with the Halberd), among other ideas. It was also the first main series Kirby game to feature multiplayer, allowing a second player to take control of a Helper that Kirby can call to his side by sacrificing a Copy Ability.

In 2008, the game received a remake named Kirby Super Star Ultra on the Nintendo DS.

Kirby makes his way through a common landscape in the Dyna Blade game.

Kirby Super Star is a two-dimensional side-scrolling action platformer game set in the fictional cartoon world of Planet Popstar (and neighboring planets by extension). There are six primary games (or stories) to choose from, and while each differs in theme, objective, and rules, they all share the same basic play-style. Each of them has the player playing as Kirby; a deceptively powerful pink ball-shaped denizen of Dream Land who can inhale his opponents and swallow them to gain their powers. Kirby also possesses the ability to puff up and fly, thus being able to surpass obstacles he would not be able to jump over normally. As such, the central focus of the gameplay is not on the platforming per se, but rather on combat, puzzle-solving, and exploration. The only real exception to this is Gourmet Race, which pits Kirby's speed against King Dedede's on a series of linear courses with relatively few hazards.

Kirby does battle with the Combo Cannon, a boss from Revenge of Meta Knight.

Using his Copy Abilities, Kirby has a massive variety of ways to fight his opponents, most of whom have relatively few ways of attacking in turn aside from simply running into Kirby (an action that also harms them in the process). Instead, more potent enemies known as Bosses and Mid-Bosses appear on occasion to block Kirby's path and provide a more substantial fight. These enemies typically have a high amount of durability, cannot be inhaled while standing, and will take several hits to defeat. Unlike standard enemies, they are also resistant to flinching or being knocked back, meaning Kirby has to find an opening to attack them or he will be hit in return. Each game in Kirby Super Star keeps a score, which increases whenever an enemy is defeated or a certain object destroyed. However, this score has very little bearing on the gameplay proper, and is not saved by the game after completion. If Kirby runs out of stamina, he will be defeated, losing whatever ability he may have had and having to start again from the point where he entered the area. Each defeat subtracts a 1-Up from his count, and if he loses all of them, a Game Over will occur, though this has little consequence aside from having the score reset.

Kirby Super Star was the first game to employ multiplayer in the main series. Whenever Kirby has a Copy Ability, he can use it up in order to call a Helper; a friendly character who resembles one of the ability-providing enemies. This character can then be controlled by a second player and can tag along with Kirby and help him in the fights, though the helper cannot venture off in their own direction. The helper is limited to whichever abilities the corresponding character has, and cannot inhale like Kirby can to gain a new one, instead relying on Kirby to change their ability through various means. Kirby and his helper can share recovery items they collect, and in some cases, perform combination moves, with the most famous example being the Wheelie Rider. While helpers have less stamina than Kirby, a defeated helper does not detract from Kirby's 1-Up count and can be brought back by using up another ability, using the Suppin Beam, or using some other method. 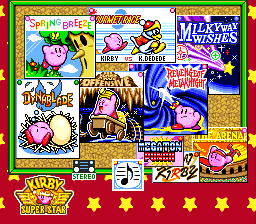 The fully-unlocked "corkboard" menu for the game.

Kirby Super Star consists of six primary games, an extra boss endurance mode known as The Arena, and two Sub-Games. Only four of the main games are available at first, with the other two (Revenge of Meta Knight & Milky Way Wishes) unlocked as the former are completed. While all of the main games share the same basic play-style, their objectives and rules differ greatly, as well as their general tone and aesthetic.

Kirby Super Star features 24 standard Copy Abilities and two special abilities. Unlike previous titles, these abilities often feature extensive move-sets, with several different attacks that can be performed with specific inputs, including by holding the attack button, performing moves in mid-air, or while dashing, or inputting a specific direction while attacking. Additionally, almost every ability comes with a special hat and/or color change which is applied to Kirby when he gains the ability (Kirby Super Star being the first game in the series to do this). 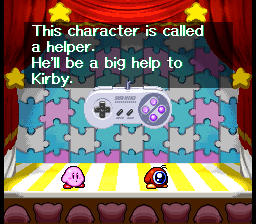 The Beginner's Room introducing the concept of Helpers.

While in possession of an ability, Kirby can spend it to call a Helper to his side, who resembles an enemy who would normally provide that ability. The Helper gains access to all of the same moves as its corresponding ability on Kirby, and in most cases also gains an Infinity Jump, but has less health than Kirby most of the time. The Helper can be controlled by a second player for co-op play, but will normally be controlled by the CPU. At any time if Kirby is without an ability, he can use the Suppin Beam to transform his helper into an inanimate object which can be inhaled and swallowed for the original ability the helper was based on.

During most of the main games (excluding Gourmet Race), Kirby encounters various enemies that he can interact with on his adventure, some of which may only be found in certain games. Most of these can be inhaled and either spat at other enemies to deal them damage, or swallowed. Swallowing certain opponents may grant Kirby a Copy Ability (except in Milky Way Wishes, where abilities cannot be acquired from foes in typical fashion).

Every enemy in the game, apart from those that are invincible, possesses a certain amount of health that Kirby must deplete if he decides to defeat it by using physical attacks instead of inhaling it. In all main games apart from The Great Cave Offensive, eliminating an opponent by inhaling or otherwise destroying it adds a certain amount of points to Kirby's score, which varies depending on the enemy.

*A transformed Scarfy explodes instantly when attacked in any manner.

Mid-Bosses are stronger opponents encountered at different points throughout many of the game's stages. When Kirby engages in battle with one or multiple Mid-Bosses, he usually cannot progress further until all Mid-Bosses on the screen have been destroyed. Like bosses, each possesses a health meter; once its health reaches zero, it is defeated. Apart from Kracko Jr. and the Meta-Knights, all Mid-Bosses can be inhaled after their defeat and swallowed for a Copy Ability. Unlike regular enemies, most of them are invulnerable to Kirby's slide attack or Air Bullets.

Bosses are very powerful opponents who tend to lay at the end of levels and stages in the various games. Unlike previous games, however, bosses are not always fought at the end of levels, with some being entirely skippable. They can be distinguished from proper mid-bosses however by their distinct battle music, their on-screen appearances, and the fact that they cannot be inhaled under any circumstances.

All bosses are re-fought in The Arena, so the 'Appearance' category will not include that mode for the sake of brevity.

In addition to the icons of Copy Abilities and Helpers, a number of extra portraits can appear in the heads-up display, signifying additional effects, or representing other characters. These are as follows:

Kirby Super Star was a massively influential game in the Kirby series, establishing a large number of tropes and features that would persist throughout most of the subsequent main-series games, as well as some games outside of the series. Some of the main influences include:

Animation sprites of Yo-Yo, Fighter, and Cutter from the NES prototype of Kirby Super Star

Mario, Luigi, Toad and Birdo cheering at Stone Kirby transformed into a statue of Mario in the battle against King Dedede