This article is about the ability. For the Kirby: Right Back at Ya! character, see Sword Knight.

Sword is a Copy Ability which grants Kirby a blade to wield against his foes. First appearing in Kirby's Adventure, this is one of Kirby's oldest and most essential abilities, and has since become one of the most ubiquitous and recognizable Copy Abilities in the series - often being among the first (if not the very first) seen. When utilizing it, Kirby adopts a green hat with a yellow brim and a pompom at its tip, which grants him a look similar to that of Link from the The Legend of Zelda series. The most common way to obtain the Sword ability is by inhaling Sword Knight, Blade Knight, or the Mid-Boss Gigant Edge. Sword is also notable for being one of the abilities that can be used underwater, making it very versatile. In Kirby's Return to Dream Land, there is a super version of this ability called Ultra Sword.

A recurring character, the sword-wielding Meta Knight, is prone to challenge Kirby to duels throughout the series. Prior to these battles, Meta Knight commonly throws Kirby a sword, which he can use to get the Sword ability as well. In most cases, Meta Knight refuses to battle Kirby if he is not equipped with this ability.

Among Sword's most iconic roles is its use to battle Meta Knight in many of the games he appears as a boss in.

The Sword ability was first introduced in Kirby's Adventure, where Kirby could copy the abilities of his foes for the first time. When sporting this ability, Kirby's sprite doesn't change, but he can be seen holding a sword. The sword can be swung by pressing the B Button, allowing Kirby to use two different attacks. If Kirby uses the sword while standing on the ground, he swings the blade in front of him, while he performs a cutting somersault when in mid-air or underwater. The Sword ability is also essential for the boss battle against Meta Knight in Orange Ocean.

Sword reappears in Kirby: Nightmare in Dream Land, where it retains the same functions as in the original game. Due to the graphic update, Kirby also adopts his green cap when getting this ability.

Sword reappears as one of Kirby's regular copy abilities in Kirby Super Star and its remake Kirby Super Star Ultra. Since this game introduced the concept of Kirby wearing different hats after copying an opponent, this game is the first to show him with the signature green cap. Aside from the updated sprite, Kirby also has access to a whole pool of new sword techniques, which can be used to defeat foes more efficiently. When carrying a Sword, Kirby can also summon a Blade Knight and use him as a Helper in battle.

Additionally, in Meta Knightmare Ultra, Meta Knight can summon a Blade Knight (and sometimes, a Sword Knight) as his Helper.

Sword appears as an ability in this spin-off racing title. When acquired from Sword Knight, Kirby gains his familiar green hat and a sword with which he uses to swipe automatically at any enemies or opponents in his path. The ability lasts for only a short time before disappearing. Kirby uses the Sword ability in the opening cutscene to defeat two Sword Knights in cinematic fashion before facing off against Meta Knight.

Meta Knight essentially has permanent access to the Sword Ability in this game. 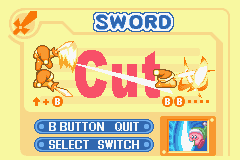 Pause subscreen image for Sword in Kirby & The Amazing Mirror.

The Sword ability returns in Kirby & The Amazing Mirror in its usual function. Its move-set in this game is similar to Kirby's Adventure and Kirby: Nightmare in Dream Land. Additionally, Kirby can now chain his sword slashes together, which makes him able to attack very rapidly. Kirby is now also able to use Final Cutter (instead called Final Sword) against enemies, a technique which is usually exclusive to the Cutter ability. A more powerful version of the Sword ability is also featured in this game, called Master. Kirby obtains this special ability in the final boss battle, after picking up Meta Knight's sword.

Curiously, Kirby is depicted with the Sword ability on the American box art of Kirby & The Amazing Mirror.

Sword makes another appearance in the game Kirby: Squeak Squad, using the same moveset as Kirby & The Amazing Mirror. After obtaining the appropriate Ability Scroll, Kirby can infuse his sword with ice, fire, or lightning by combining its Copy Ability bubble with the Ice, Fire and Spark Copy Abilities respectively. While this does not change its moveset, it adds additional power to Kirby's sword swipes, and allows him to affect enemies and the environment in a similar manner to the element it is infused with. Notably, none of these elements can be used underwater, as noted in the abilities' pause screen description, causing Kirby's sword to revert to normal while submerged.

Artwork of Sword Kirby from Kirby's Return to Dream Land.

Meta Knight's moveset as a playable character has several similarities to the Sword ability.

Sword is one of the abilities that can be used in the sub-game New Challenge Stages. It has the exact same function and look as it does in Kirby's Return to Dream Land.

Sword makes a reappearance in Kirby: Triple Deluxe. Like most of the returning copy abilities, it is mostly unchanged since its appearance in Kirby's Return to Dream Land, though it has a few new tricks. Starting here, Kirby gains the "Sky Energy Sword" attack, which allows him to fire a Sword Beam at any level of health after raising his sword in the air for a short time. This is a direct reference to the Skyward Strike from The Legend of Zelda: Skyward Sword.

In addition, Sword gains "Twister Slash", which allows Kirby to rise while using Spin Slash, and "Hat Thrust", which causes Kirby to thrust his sword downward as he gently falls to the ground. This move is very similar to the old version of Down Thrust seen in Kirby Super Star and Kirby Super Star Ultra.

Sword is also available as one of the abilities in Kirby Fighters.

Sword is one of the selectable abilities in Kirby Fighters Deluxe, functioning exactly the same as it did in Kirby: Triple Deluxe, though its underwater abilities are removed due to there being no water in this game. Its unlockable Rare Outfit is based on Blade Knight's appearance.

Sword returns in this installment, and can be combined with the Robobot Armor for new functionality. In addition, Kirby can obtain this ability if the player scans various amiibo of swordfighters (most notably Link). There is also a special Meta Knight variant of the ability that Kirby can use if the series Meta Knight amiibo is scanned in.

Artwork of the Sword ability from Battle Royale.

Sword is one of the abilities available in this title, and is the one most prominently featured. With the Sword ability, Kirby can move smoothly through the battlefield and hit opponent Kirbys all around him with his Spin Slash. The Drill Stab move can also be performed both on the ground and in the air, though it doesn't travel as far in the air.

There are a number of different costumes for the Sword ability as well. Scanning the Kirby series Kirby amiibo grants a costume that represents the Ultra Sword ability.

Sword returns in this title, functioning much as it did in previous main series games. It notably loses Sky Energy Sword, however, as its input is now the universal input for using Friend Abilities. Here, like with the other abilities, Kirby can combine Sword with Power Effects to enchant it, which can include Sizzle, Blizzard and Zap fusions.

Sword does not appear in its normal form in Super Kirby Clash (Sword Hero is used instead). However, Regular Sword Kirby does appear as a sticker, purchasable from Magolor's Shoppe for 20 Gem Apples.

Sword Kirby battling a Sssnacker in Kirby and the Forgotten Land.

The Sword ability makes a return in Kirby and the Forgotten Land, and can once again be obtained from Blade Knight. Multisword Attack and Spin Slash are available as attacks. Notably, Overhead Slash and final swing of Multisword Strike have been replaced with more lateral swings instead. During his adventures, Kirby can find a blueprint, which can then be taken to Waddle Dee's Weapons Shop to evolve the Copy Ability into new forms. There are three evolved forms in the game, those being Gigant Sword, Meta Knight Sword, and Morpho Knight Sword. Gigant Sword is slightly slower, but has much greater range and power. Meta Knight Sword allows Kirby to fire sword beams when he attacks and use Upper Calibur. Morpho Knight Sword allows Kirby to teleport when dodge rolling, make his sword giant for a limited amount of time, recover health when making combo strikes, and use two guard attacks (Sukhavati Psychic Beast on the ground, and Sukhavati Scale Wave in mid-air).

This ability is one of four accessible in the game's demo. It automatically becomes one of its evolved forms, that being Gigant Sword, once the three available stages are complete, but this can be reverted back to the original ability if the player so desires.

Sword Kirby does not appear directly in Kirby's Dream Buffet. However, he does appear on four Character Treats: one using a sprite from Kirby's Adventure, another pairing artwork of him with Beam Kirby from Kirby Fighters Deluxe, a third pairing artwork of him with Wrestler Kirby from Kirby Fighters 2, and one more depicting him with Wrestler Kirby riding the Buddy Star Blaster. Notably, this marks the first time Sword Kirby was referenced in a Kirby game that Sword Kirby does not actually appear in.

Other abilities which resemble Sword[edit]

In addition to Sword proper, there are a number of other abilities and items in the series which resemble the Sword ability, but are not exactly the same. These are as follows:

Sword makes an appearance in the anime series Kirby: Right Back at Ya!, being one of the first abilities to appear. When Kirby has this ability, he is able to fight like a master swordsman, using lightning-quick attacks to chop up monsters that oppose him. His signature technique when using the Sword ability is the powerful Sword Beam, which is capable of cutting clean through solid objects. Although not quite the same ability, Kirby can also wield the Galaxia, and wears the same cap when doing so.