Escar-droid is a robotic duplicate of Escargoon built by the snail to take over his duties to King Dedede in the Kirby: Right Back at Ya! episode Right Hand Robot. The robot was programmed to obey King Dedede's commands, which the King abuses, causing the robot to be wrecked several times. In order to fix it for good, Escargoon inserts a heart-shaped part from Night Mare Enterprises into the robot to give it feelings, but this ends up turning the robot into a flying missile-launching jet monster instead. After it terrorizes Dream Land, Kirby destroys Escar-droid using the Bomb Copy Ability, much to Escargoon's chagrin.

Escar-droid was built to resemble Escargoon in size, shape, and general coloring, though it is noticeably blockier than him, and covered in bolts and rivets. The first version of Escar-droid travels using a set of wheels on treads similar to those of a tank, and is programmed to follow King Dedede's orders, regardless of what they may be.

After being wrecked twice both directly and indirectly by King Dedede, Escargoon uses a special heart-shaped part provided by Night Mare Enterprises to fix Escar-droid and imbue it with feelings. This appears to work at first, as the newly improved Escar-droid 2 is more efficient than the older model, and also refuses orders that involve violence. However, this new model comes with two buttons on its shell: the green button deactivates its feelings and turns it into a sword-wielding combat version, and the red button permanently transforms it into a fighter jet. In this last form, it is capable of firing homing missiles in rapid succession which it uses to terrify the kingdom. 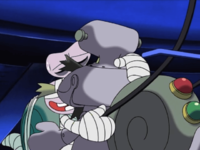 Escargoon embraces his robotic double after he succeeds in repairing it using Night Mare Enterprises' technology.

In Right Hand Robot, Escargoon builds Escar-droid overnight in order to meet King Dedede's needs and to spare himself from the King's punishment. However, the fact that Escar-droid obeys all of King Dedede's commands is abused by the King and he orders it to attack Escargoon, and then attack Kirby. After taking a few hits, Kirby manages to run away and then lure the droid off a balcony, causing it to fall and get wrecked. After recovering the wrecked droid, Escargoon ropes in Tiff to help him repair it over a second night. However, the following day, King Dedede ends up wrecking the robot again more severely. After failing to put it back together again with Tiff a third night, Escargoon is roped into pretending to be the robot and is ordered to attack Kirby and Tuff with a bazooka. When Tiff learns of this, she refuses to help Escargoon any further, forcing him to resort to Night Mare Enterprises to help him repair Escar-droid.

Over a fourth and final sleepless night, Escargoon inserts the part N.M.E. sent into Escar-droid and revitalizes it. He shows King Dedede the droid's improved abilities and its newly-passive nature, but the N.M.E. Sales Guy then chimes in and tells King Dedede about the buttons on the droid's back. King Dedede pushes the green button which deactivates Escar-droid 2's feelings and transforms it into a sword-wielding combat robot. Against the others' advice, King Dedede then pushes the red button, which transforms Escar-droid 2 permanently into a fighter jet which flies out of Castle Dedede and attacks the kingdom at will.

Escar-droid 2 then attacks Kirby, who fights back with the help of his Warp Star. Kirby swallows one of the droid's homing missiles to gain the Bomb Copy Ability. Kirby then outmaneuvers the droid and then destroys it using a bomb and one of its own missiles. Escargoon is left to mourn the loss of his droid, but before he can cry for long, he falls asleep from exhaustion.