The True Arena is a Boss Endurance mode and a more challenging version of The Arena, featuring more and/or tougher bosses to be fought in sequence, usually from each game's other Extra Modes, and fewer recovery items and Copy Abilities available along the way. The True Arena is intended to serve as the final and toughest challenge in the games it appears in, and always features at least one boss that does not appear elsewhere in the game. It has appeared in all games featuring The Arena except for Kirby Super Star.

Completing The True Arena is a requirement for 100% completion of the games it appears in. It is hidden from the menu at first, typically requiring the clearing of several other game modes, including The Arena, for it to be unlocked. 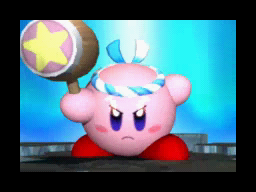 Kirby in the intro in Kirby Super Star Ultra.

The True Arena is the final game-mode in Kirby Super Star Ultra. It is similar to The Arena, requiring Kirby to defeat a total of ten bosses previously encountered in the game. However, he only receives five tomatoes and no Maxim Tomatoes. Also, while the first six bosses are in a random order (like The Arena), the last four are fought in a set order (like Helper to Hero). Kirby fights all the bosses that did not appear in the original Kirby Super Star here. This mode is unlocked when all other modes of the game are completed, including The Arena.

Kirby encounters the following bosses in this stage:

Screenshot of introduction screen from Kirby's Return to Dream Land.

The True Arena in Kirby's Return to Dream Land differs a bit from Kirby Super Star Ultra. It is again similar to The Arena, requiring Kirby to defeat a total of fifteen bosses previously encountered in the Extra Mode of the game and is unlocked by clearing said Extra Mode. However, he receives only three Maxim Tomatoes, being replaced with smaller tomatoes after use. While the first ten bosses are in a random order (like The Arena), the last five are fought in a set order.

This True Arena also allows multiple players to join in the fight, and allows the player to play as a character other than Kirby.

The True Arena is unlocked after successfully completing The Arena and Dededetour!. 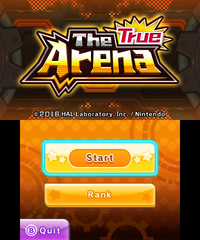 Unlike in previous installments, all the bosses and Mid-Bosses are fought in a set order. Rather than having a limited amount of healing items, an Assist Star is given after most rounds. Unlike with The Arena, however, the contents are only cherries, with the exception of the Assist Star right before Star Dream Soul OS, which provides an Energy Drink. No Assist Stars are provided after Susie 2.0 and the Dedede Clones 2.0.

The following bosses are fought in The True Arena in this order:

Like The Arena, this mode isn't actually called "The True Arena" in the Japanese and Korean versions of the game - instead, it is named かちぬきボスバトル (True Boss Battle Tournament) and 진 보스와 정면승부 (True Head-to-Head Boss Battles), respectively. "Boss Battle Tournament" is the Japanese name for Boss Endurance in Kirby: Nightmare in Dream Land, Kirby & The Amazing Mirror, and Kirby: Squeak Squad. "Head-to-Head Boss Battles", likewise, is used to refer to Boss Endurance in the Korean version of Kirby: Squeak Squad.