Blocky is an enemy that appears relatively frequently throughout the Kirby series. He has a gray or pale purple dense body of stone that is shaped like a cube with two round eyes and a simple mouth. Two cuboids made of the same material are located below the cubic body and serve as the creature's feet. He appears to be very heavy, a fact which is reflected by his main method of attack: trying to crush Kirby with his body mass. Defeating and inhaling him yields the Stone ability for Kirby. Blocky usually appears as a Mid-Boss, or inherits another function that consists of opposing Kirby. Blocky follows a similar concept as Rocky, who is also a creature made of stone, albeit Rocky more resembles a natural rock.

Blocky debuts in this title, acting as one of the Mid-Bosses. He attacks using charges and body slams, and will cause a rock to appear when crashing into a wall or floor, which can be used against him. When defeated, Blocky can be inhaled for the Stone ability.

Blocky appears in the following levels and stages:

Blocky is a common enemy in this title. He takes two hits to defeat, and is worth 600 points each time he is hit. He drops a Block Flip item on defeat. 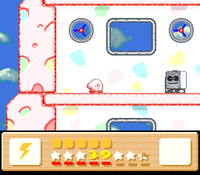 Blocky appears in Kirby's Dream Land 3 as one of six Mid Bosses in total. He is encountered alongside all the other Mid Bosses in the sixth stage of the Iceberg. In battle, Blocky tries to rush into Kirby, crushing him into the wall, or he jumps around and attempts to flatten Kirby underneath him. The heavy impact of Blocky's attack create Drop Stars which Kirby can inhale and use as projectile weapons against this Mid Boss. After Blocky is defeated, Kirby can inhale him to obtain the Stone ability. Blocky also appears in the enemy parade during the False Ending.

Blocky reappears in Kirby Mass Attack in the mini-game Kirby Brawlball. He is found in the Lololo & Lalala mini-boss battle. Blocky walks around, trying to block Kirby from hitting Lololo & Lalala. He may also occasionally ground pound to try and attack Kirby. if successful, this attack could make Kirby drop down the hole back into the main pinball part.

Blocky returns and makes his first 3D appearance in Kirby: Triple Deluxe, once again as a Mid-Boss. His battle strategy is similar to that of Kirby's Dream Land 3, but with two added attacks: one is enlarging in the background and falling forward in order to squash Kirby, while the other is the "Dice Rush," which has Blocky rolling around the arena in another attempt to flatten Kirby. After most moves, Blocky will harden and be invincible for a few seconds. A powered-up version called Blocky DX exists in this game.

In Kirby: Triple Deluxe, Blocky can be found in the following levels and stages:

Blocky returns in this installment, and is unchanged in function compared to his appearance in Kirby: Triple Deluxe, despite now possessing some robotic parts. His upgraded variant in this game is known as Blocky 2.0.

In Kirby: Planet Robobot, Blocky can be found in the following levels and stages: 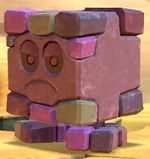 Blocky is encountered three times during Team Kirby Clash Deluxe. He fights in much the same way as before, but is increased in size, and his moves made more lengthy. He also turns invincible more than before.

Blocky returns as an opponent in Super Kirby Clash, with much the same strategy as he had in the game's predecessor. Although not changed in fundamental look, the upgrade in the game's fidelity gives Blocky a detailed rough texture which better sells the idea that he is made of stone. Blocky is encountered in six separate Quests, and in two cases, he is paired up with another enemy; one being Hornhead (as part of Team Tough Stuff) and the other being Bonkers (as part of Team Heavy Hitter).

The following are all of Blocky's attacks in Super Kirby Clash. Note that most attack names are conjectural:

Kirby of the Stars Pilot[edit]

Blocky makes a brief appearance in Kirby of the Stars Pilot, where he resembles his video game incarnation. He is shown for just a second being zapped by Spark Kirby.

In A Blockbuster Battle, Blocky is a monster who is called forth by King Dedede from Night Mare Enterprises. This version of Blocky looks quite different from the video game version (though it is revealed that the monster is made up of four smaller Blockys who do somewhat resemble the video game version) sporting well-defined hands and feet, bearing a more cuboid shape and wearing Japanese sumo wrestling gear. Blocky is described as a 'super-high-density' creature, making him almost immune to Kirby's inhale.

Blocky starts off as a small nondescript brick which can be carried in a character's hands, and grows to his full size when ready to battle. Blocky is so heavy that he is able to crash through several floors of Castle Dedede at once using a stomp. Due to his incredible weight, Kirby, Tiff, and Tuff have to trick him into standing by a cliff in order to successfully move him with Kirby's inhale. This causes Blocky to split into four smaller pieces. Kirby is then able to inhale one of these to gain the Stone ability, and then defeat the other three by sinking them into the ocean.

Interestingly, the fourth piece of Blocky ends up getting spat out by Kirby later, instead of being absorbed completely.