Sir Gallant is a quixotic space-faring knight who appears exclusively in the Kirby: Right Back at Ya! episode One Crazy Knight. He is a stout round creature who wears flimsy medieval armor and carries a crooked lance. He takes on the guise of a fictional comic book character by the same name, and appears to genuinely believe in this role-playing act, but during his brief moment of disillusionment, he admits that Sir Gallant is merely a comic book hero. As such, it is unclear what Sir Gallant's real name is.

Sir Gallant is heavily inspired by the main character of the classic novel Don Quixote. His Japanese name Quixano references this more directly.

Sir Gallant is a round creature with a physique similar to Pac-Man in his 3-D incarnations, bearing defined though stubby arms and legs with fully-fingered hands. Sir Gallant has tan skin, and his face is defined by his massive eyes and blonde mustache and eyebrows. His armor resembles that of Sir Kibble, but is dim gray in color and has a green feather atop the helm instead of a Cutter blade. Underneath this armor, Sir Gallant wears a dull green jumpsuit. In combat, he wields a lance which has had its tip bent and battered, making the weapon ineffective as anything other than a bludgeon.

Sir Gallant is defined by his delusional chivalry and his erratic behavior. He describes himself as a monster hunter, but routinely lashes out at innocent Dream Landers. Despite his knightly appearance, he is a terrible fighter, as Sword Knight and Blade Knight find out first-hand. He also frequently gets distracted from his goals while playing up his charade, an example being when he is distracted from his task of defeating King Dedede when he confuses Mabel to be the long-lost Princess Zaia. Sir Gallant is also shown to be a slob, as his space ship is littered with unkempt garbage and clutter.

Sir Gallant's most defining characteristic is his insistence that he is a fictional comic book hero by the same name. Near the end of One Crazy Knight, his delusion is shattered momentarily when the monster Windwhipper shows him his reflection (implying that he does not look like the fictional Sir Gallant under the helmet), but he is later roused by Mabel when she accepts her role as the fictional Princess Zaia; who in the comics was a character that Sir Gallant rescued from another world and kept safe.

Role in One Crazy Knight[edit] 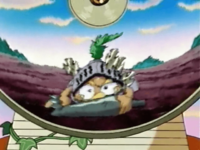 Sir Gallant is shown his reflection by Windwhipper, shattering his fantasy.

Sir Gallant makes his only appearance in One Crazy Knight, where he is the focus of the episode. After crashing his space ship into Dream Land, he antagonizes Kirby, Tiff, and Tuff, believing them to be monsters. Later on, after coming to terms with them, Sir Gallant is goaded by Tuff into believing King Dedede to be a monster, and antagonizes him and Escargoon before being stopped by Sword Knight and Blade Knight, who report Sir Gallant's lack of martial skill to Meta Knight. Sir Gallant is later distracted when he sees Mabel, believing her to be the fictional Princess Zaia. Meanwhile, Meta Knight, his soldiers, and the kids discover the comic books Sir Gallant based his life on in his holdings while repairing his ship while King Dedede and Escargoon review these comics themselves back at the castle.

In order to get revenge on Sir Gallant, King Dedede calls forth a monster called Windwhipper which resembles an enemy from the comic books. It attacks Sir Gallant with its rotor blades, and then shows him his reflection while he is down, breaking his fantasy. This event is so catastrophic to Sir Gallant that his armor shatters and he loses his will to live; resulting in his vital signs fading away despite Kirby defeating the monster to protect him. Before he can die, however, Mabel rouses him by accepting her role as the fictional Princess Zaia and calling him back to action, pleading with him to not give up on his dreams. Revived, Sir Gallant promises to continue his journey to fight monsters across the galaxy, and leaves Dream Land in his space ship.