Kirby on the Draw

Kirby on the Draw is one of the Sub-Games appearing in Kirby Super Star Ultra and is available from the start of the game. This sub-game is playable in both single player and multiplayer, where up to four players can play via a wireless connection, only needing one game card.

Similar to Quick Draw from the original Kirby's Adventure, Kirby on the Draw takes on a wild west theme, and the four competing Kirbys (pink, yellow, red, and green) are dressed in a cowboy hat and ammo belt. The setting appears to be within a saloon, especially considering the saloon door behind the Kirbys. This Sub-Game has three difficulty options, much like other Sub-Games.

Kirby on the Draw is set to return in Kirby's Return to Dream Land Deluxe, where Bandana Waddle Dee, King Dedede, and Meta Knight can now be chosen as contestants. 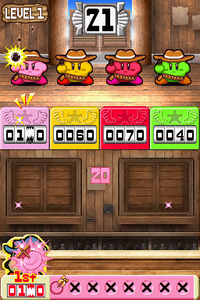 Kirby on the Draw plays similarly to a typical speed/reaction-style shooting game. The objective is for each Kirby to shoot as many cardboard cutouts as possible of enemies, bosses, and helpers (which are also wearing cowboy attire) within a 60 second (one minute) time limit. The Sub-Game occurs on the lower screen, where the player must use the Stylus to tap on the cardboard cutouts appearing every second. They must tap it quickly, before a rival Kirby beats them to it. The top screen shows the four Kirbys and each of their points.

Players must avoid tapping bombs, as they are false targets and a penalty for the Kirby who shot it. The Kirby who fired it becomes gray and is unable to fire for a second.

Players cannot fire indefinite ammo, as their revolver only carries eight bullets. There is a pink bar spanning across the bottom of the touch screen, and it displays the bullets that were fired and the remaining ones. Each fired bullet is represented by a black X mark while each remaining bullet is represented by a dart centered within a red circle. After firing every bullet, the player cannot fire anymore, and can reload by tapping the bar.

The Kirby who ends up with the most points wins.

Some targets are worth more points than others. Targets that are worth a higher score appear less frequently.