This article is about friendly versions of enemies that Kirby can summon or recruit. For the animal helpers debuting in Kirby's Dream Land 2, see Animal Friend. For other helpful characters, see Category:Allies. 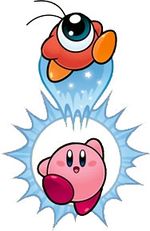 Artwork of Kirby calling a Waddle Doo as a Helper from Kirby Super Star Ultra.

When Kirby possesses a Copy Ability, he may create a helper, but loses the ability in the process. However, in want of a Copy Ability, Kirby can use the Normal Beam to transform the helper into an item yielding the ability that was used in its creation, allowing Kirby to regain it. If Kirby attempts to call forth a Helper when there is already one in existence, he instead tosses his ability away in item form, allowing the current Helper to transform into a new one when it touches the item. In Kirby Super Star, creating a Helper is the only way for Kirby to manually remove his ability, while in Kirby Super Star Ultra he can also remove it by creating an Ability Star, evading the creation of a Helper.

Helpers follow the player around and attack any enemies which they encounter. They are usually able to use the same attacks as Kirby can when he possesses their ability, but can use them underwater and are capable of jumping in midair or teleporting in order to keep up with him. Although usually controlled by an AI, Helpers can alternatively be controlled by a second player. They will always have one reoccurring color scheme to differentiate them from the enemy variants.

Kirby's current Helper possesses its own, separate health bar. The health bar can be refilled by having the Helper pick up food or touching it shortly after Kirby himself does so. When a Helper's health runs out, it flashes and begins to explode. During this period, touching any enemy that yields an ability transforms the Helper into a new one that possesses the respective Copy Ability, instantly restoring all its health and keeping it from exploding. Alternatively, tossing a different Copy Ability at a Helper to transform it also heals it completely.

Helpers can be stolen by a Tac just like Copy Abilities. If it does, the player's helper disappears.

Helpers return in Kirby Star Allies (which are known as Friends). Instead of needing to give up Kirby's Copy Ability like in Kirby Super Star and its remake, Kirby uses a special item known as a Friend Heart to make friends and up to three can be recruited at any time. As Friends, they will be color coded by player order, and use the same headgear that Kirby does. In addition, they can combine their powers together and with Kirby to perform a Friend Ability, and can be controlled by up to 3 extra players. While CPU friends are following Kirby, he can jump onto their backs and control them directly if need be. If Kirby has an ability and no CPU Friends with him, an extra player joining will force Kirby to give up his ability and turn it into a Friend.

It is possible for Kirby to inhale his friends and use them as projectiles, or swallow them to gain their ability.

Friends who are KO'd will lie on the ground until revived, unless they fall to a hazard or are underwater, in which case they will be removed from the stage shortly thereafter (or instantaneously if crushed). To revive a friend, the player can press and hold X (or the Up button when holding the Joy-Con sideways). After a few seconds, the friend gets revived by whichever character the player was using at that time with half their stamina.

If a friend is left KO'd when going through a doorway, that friend will be revived in the next area, though with minimal Stamina. This can be used in certain situations to save a friend that has been felled by a hazard or while underwater to save them before they are removed. KO'd allies will also be revived with minimal Stamina if sent flying by certain Boss moves, such as Whispy Woods' jump mid-fight.