This article is about a healing item found in most Kirby games, and should not be confused with the Metamato from Kirby's Epic Yarn and Kirby's Extra Epic Yarn.

Maxim Tomato is an iconic and reoccurring recovery item found throughout the Kirby series, although rather uncommonly found in individual games. It is a big red juicy tomato with the letter "M" stamped on the front which serves as a source of food that restores Kirby's health meter entirely or, in Kirby Mass Attack, grants a full 100 fruit points. This item is usually found in easily-overlooked hiding places, areas that are difficult to traverse, or areas that can only be reached with certain Copy Abilities; much more so in difficult levels. They are also often featured growing in trees or otherwise made available in the rest areas of The Arena and other Boss Endurance modes.

Maxim Tomatoes return in Kirby's Adventure and Kirby: Nightmare in Dream Land, being finally given its proper name in the manual. Here, in addition to being found in certain places, Poppy Bros. Jr. can be seen riding them. To get the tomato, Kirby has to inhale the enemy. Attacking any other way will destroy the tomato first. Maxim Tomatoes are also rewarded for defeating the opponent in an Arena.

In Kirby's Pinball Land, Maxim Tomatoes are not used to recover health (as health does not exist in this game). Instead, they appear to temporarily block the central drain when the right conditions are met on the pinball land being played on.

In Kirby's Dream Land 2, Maxim Tomatoes return and serve their usual function. Here they are simply referred to in the manual as Tomato[1]. In addition to being found in regular stages, tomatoes can also be obtained by playing the Goal Game.

Maxim Tomato along with two Energy Drinks in Kirby's Toy Box - Pinball is a helpful item rewarded for lighting up certain targets on the field. It is temporarily placed directly between the flippers and protects pinballs from draining. 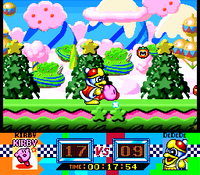 Kirby and King Dedede racing towards a Maxim Tomato in Gourmet Race in Kirby Super Star.

Maxim Tomatoes appear in Kirby Super Star and Kirby Super Star Ultra. They can be found in stages and in the Goal Game in Dyna Blade. In Gourmet Race, they are worth 3 points as opposed to 1 point for other food items. In The Arena, five Maxim Tomatoes are available from a tree in the rest area. In Helper to Hero, there are three tomatoes.

In the Sub-Game Snack Tracks, Maxim Tomatoes appear along the conveyor belts and are worth 6 points. However, there could be a bug inside the tomato, which will make it worthless.

Maxim Tomatoes appear in Kirby's Dream Land 3, serving their usual purpose. They can also be collected during the Goal Game.

Maxim Tomatoes appear in Kirby 64: The Crystal Shards, serving their usual purpose (here they are just called "Tomatoes" by the instruction booklet). They can also be collected during the Bonus Game and can be painted for Kirby by Adeleine. When re-matching a boss, it will drop a Maxim Tomato for Kirby when it is defeated.

In Kirby Tilt 'n' Tumble, A Maxim Tomato is among the things that Kirby can get from a ? Hole roulette.

In Kirby Tilt 'n' Tumble, Maxim Tomatoes (referred to in the manual as just "Tomatoes") can be found in stages, either out in the open, hidden behind blocks, or inside Treasure Chests. They can also be obtained from roulettes triggered by ? Holes and from Gordos when they are flipped. Notably, there are some food items in this game that are more valuable than Maxim Tomatoes (hamburgers and cake) which can only be obtained from the treasure chest opened prior to a boss fight, as these items will overfill Kirby's health beyond its normal maximum.

In Kirby Air Ride, Maxim Tomatoes can appear alongside other food items in the City Trial game mode. They can appear in blue boxes, from the Star Pole, in the Castle Hall secret chamber, in the volcano grottos, from Tac, or out in the open.

Maxim Tomatoes appear in Kirby & The Amazing Mirror. They can be found out in the open, in treasure chests, or as a gift from CPU Kirbys when they are called using the Cell Phone. 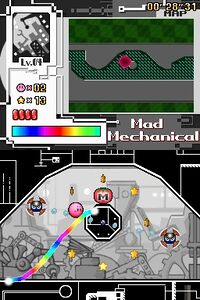 Kirby approaching a Maxim Tomato in a pre-release version of Kirby: Canvas Curse.

Maxim Tomatoes appear in Kirby: Canvas Curse, and can be found at various points in stages. They can also be found in Paint Panic and Cart Run.

Maxim Tomatoes appear in Kirby: Squeak Squad. They can be found out in the open or during the Goal Game. They can also be created using the Copy Palette by combining other bubbled food items together.

In Kirby Mass Attack, Maxim Tomatoes have a different function, due to the different health system in the game. Instead of healing the Kirbys, collecting a Maxim Tomato will add 100 points to the Fruit gauge, which is enough to completely fill it and either add an extra Kirby or award 10000 points if there are already ten Kirbys.

In the Sub-Game Kirby Quest, Maxim Tomatoes are provided by the opponents Chef Kawasaki, Chef Shiitake, and Max Flexer, assuming they are defeated properly. These tomatoes do heal the Kirbys.

Maxim Tomatoes appear in Kirby's Return to Dream Land. Here, they can be found out in the open or inside Maxim Tomato boxes.

Maxim Tomatoes appear in Kirby: Triple Deluxe. Here, they can be found out in the open, during the Goal Game, or from Assist Stars tossed to Kirby by Bandana Waddle Dee. There is also a special variety of Maxim Tomato called a Reviving Tomato which can be used to revive Kirby if he is K.O.'d, but this tomato is only given out if Kirby repeatedly fails a boss fight.

In The Arena, five Maxim Tomatoes are available in the rest area, one of which is inside an Assist Star. In The True Arena, only the Assist Star tomato is available, along with some smaller tomatoes.

Additionally, the Maxim Tomato appears as a keychain, depicted as its sprite from Kirby's Adventure.

Meta Knight with his half of the Maxim Tomato which King Dedede shared with him in Kirby Fighters 2.

In the Kirby Fighters games, Maxim Tomatoes restore 120 HP in standard battles. They also appear as distinct story items in Story Mode: The Destined Rivals, where they restore 80% health to Kirby and his buddy.

In the Story Mode of Kirby Fighters 2, a Maxim Tomato is used in the second battle against King Dedede & Meta Knight to restore their health, the first time a Boss has done so. Since the Tomato is split in half, the insides are seen for the first time; the inner veins are shaped like a star.

Maxim Tomatoes can be found in Kirby and the Rainbow Curse at various points in stages. Like other items, they are worth 500 points when collected in addition to restoring health.

Maxim Tomatoes appear in Kirby: Planet Robobot. Much like in Kirby: Triple Deluxe, they can be found out in the open, during the Goal Game, or from Assist Stars tossed to Kirby by Bandana Waddle Dee. Reviving Tomatoes return in this game as well.

Additionally, the Maxim Tomato appears as a sticker, depicted as its artwork from Kirby: Nightmare in Dream Land.

Maxim Tomatoes appear in the Team Kirby Clash games as an item that can randomly spawn during battles, usually only when a player is low on health. Just like in every other Kirby game, grabbing one fully restores the health of the Kirby who picked it up and can then be shared with their allies.

In Kirby Battle Royale, the Maxim Tomato appears not as a regular item, but instead as a Boost Orb that can be used during battles.

Maxim Tomatoes appear in Kirby Star Allies. They can be found out in the open, inside treasure chests and other containers, painted from blank signs, obtained during the Goal Game, or obtained from amiibo. They also appear in the rest area of The Ultimate Choice, though the number available depends on the difficulty selected.

Kirby serving a Maxim Tomato to a Waddle Dee customer at the Waddle Dee Café.

In Kirby and the Forgotten Land, Maxim Tomatoes can be found as one of several food items Kirby must pass out to Waddle Dees in the Waddle Dee Café: Help Wanted! Sub-Game. Kirby can also order a Maxim Tomato himself when he is off-duty to eat at the top floor of the café or take on the go to a stage as a Stock Item. They are also generally accessible in open-space stages and are usually placed in the hallways that lead to bosses.

One of the collectible figures from Vol. 1 features a Maxim Tomato.

Games in which Maxim Tomatoes do not appear[edit]

The following are Kirby games which do not feature the Maxim Tomato: