Cappy is a minor enemy that appears in most games in the Kirby series, making his debut appearance in Kirby's Dream Land. He is a small, mushroom-like creature which moves by hopping about. When Cappy has his cap on, he doesn't display any limbs, but when his cap is removed, Cappy shows a pair of stubby arms. Unlike many other recurring enemies, Cappy has had few variations, and has never had more than a minor role in the games in which he appears.

Cappy's main method of attack is no more complicated than bumping into Kirby, which also hurts the Cappy in turn. If Kirby inhales Cappy, his cap is swallowed by him, revealing his face. Once without his cap, Cappy can be inhaled in turn, though he can also be defeated by other means, whether he has his cap or not. A more common method of defeating Cappy is to inhale his cap, and then spit the cap back at him.

Cappy makes his debut appearance in the very first Kirby game, appearing only in Green Greens. In the Extra Game, Cappy is replaced by Blopper, a similar enemy disguised as a cake and possessing the ability to throw icing projectiles.

Cappy returns in these games, appearing in color for the first time. His appearance and behavior are unchanged, though he does manage to appear in a fair few stages.

Cappy can be found in the following levels and stages:

In Kirby's Pinball Land, Cappies serve as bumpers in the upper portion of Wispy-Woods Land.

Cappy makes an appearance as a bumper in the upper portion of Wispy-Woods Land. Here, bumping into Cappy the first time removes his cap and conveys 600 points. Bumping it a second time removes him from the field and conveys 1200 points. A short time after being defeated, Cappy returns.

Cappy appears in this game, largely unchanged from his previous roles in Kirby's Dream Land and Kirby's Adventure.

Cappy can be found in the following levels and stages:

Cappy appears in Stage 1 as the pre-boss enemy in Round 4. He must be hit four times to defeat and is worth 5000 points.

Notably, the Cappy that appears in Round 4 won't lose his cap, but four capless Cappys defend Big Cappy in the following round. 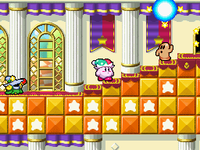 Cappy returns as a common enemy in this game and its remake, serving the same purpose as functioning the same way as usual. In the Revenge of the King mode in Kirby Super Star Ultra, the Poison Mash enemy appears, in place of Cappy.

Cappy returns in this game, largely unchanged from his previous appearances.

In Kirby's Dream Land 3, Cappy can be found in the following levels and stages:

Cappy makes a somewhat unusual appearance in Kirby Tilt 'n' Tumble. Here, he does not have his cap at all, instead opting to pop out of sand pits, water, or occupying Jump Holes. Cappy cannot harm Kirby directly in this game, but he can push him back like a bumper on contact. After appearing, Cappy will disappear again after a short time.

In Kirby Tilt 'n' Tumble, Cappy can be found in the following levels and stages:

Cappy appears as a neutral enemy in Kirby Air Ride. He stands in place on Air Ride courses, occasionally throwing his cap up and down. As usual, if Kirby tries to inhale Cappy, his cap is inhaled before Cappy himself is.

In Kirby Air Ride, Cappy can be found in the following places: 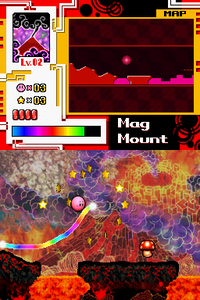 Kirby ramping toward a Cappy in Kirby: Canvas Curse.

Cappy makes an appearance in Kirby: Canvas Curse as a common enemy. He mainly sits in place or waddles around slowly. If tapped with the Magical Paintbrush, his cap will fly off when he is stunned, which can hurt Kirby if it hits him.

In Kirby: Canvas Curse, Cappy appears in the following locations:

Cappies are also conjured by Drawcia Sorceress during her boss fight. These Cappies come in four, and are a sickly blue color, similar to Poison Mash.

Cappy appears in two of Kirby Mass Attack's Sub-Games, Kirby Brawlball and Strato Patrol EOS. In the former, he appears on the board during the Whispy Woods boss fight, and requires two hits to defeat (with the first knocking off the cap). In the latter, Cappy appears as a standard enemy to be shot down in the early stages of the game.

In Kirby's Return to Dream Land, Cappy can be found in the following levels and stages:

In Kirby: Triple Deluxe, Cappy can be found in the following levels and stages:

Cappy's figurine in Kirby and the Rainbow Curse.

Cappy appears in the intro of Kirby and the Rainbow Curse where he, Waddle Doo and Broom Hatter get their color sucked away by Claycia. He would later appear as a collectible figurine.

Cappy appears in this game just as he did in previous games, with the exception of being a cyborg in every stage except the ability testing area, and the secret stage in Access Ark.

In Kirby: Planet Robobot, Cappy can be found in the following levels and stages:

Cappy appears as a common enemy in Kirby's Blowout Blast, bearing the same behavior as usual. Unlike other enemies, Kirby can score 200 points off a single Cappy by defeating him with his own cap.

In Kirby Battle Royale, Cappy does not appear as an enemy, but he can be seen in the audience in cut-scenes, as well as in the crowd for Robo Bonkers and in the passenger car of the train for Ore Express.

Cappy returns in HD for Kirby Star Allies, otherwise going unchanged since Kirby's Return to Dream Land. He cannot be made into a friend.

In Kirby Star Allies, Cappy can be found in the following levels and stages:

Cappy in Kirby and the Forgotten Land.

Cappy returns as an enemy in Kirby and the Forgotten Land. His main method of attack is to slowly hop toward Kirby when he sees him, though he may instead opt to hold position and throw his cap into the air. He has a rougher body texture than in previous appearances.

In Kirby and the Forgotten Land, Cappy can be found in the following stages: 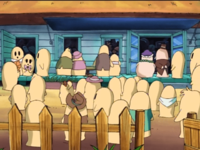 A group of Cappies of various shape and dress from an episode of Kirby: Right Back at Ya!

In the anime series Kirby: Right Back at Ya!, Cappies make up the primary intelligent race of creatures that reside in Dream Land. Here, they are portrayed without their mushroom caps, and instead come in various shapes and sizes and sporting various articles of clothing and hair/facial hair. Several hundred Cappies live in the sole established settlement of Dream Land called Cappy Town, which is led by Mayor Len Blustergas and subservient to Castle Dedede.

While most of the Cappy villagers are not explicitly named, several of them have more distinct roles and names and are recurring characters in the show. Examples include the aforementioned Mayor Len, Chief Bookem, Professor Curio, and Mabel, to name a few.