Archer is a Copy Ability which gives Kirby a bow and arrow with which to sharp-shoot his foes with from a distance. The ability was first introduced in Kirby: Triple Deluxe, where it can be obtained by swallowing the enemy Spynum. Unlike with the relatively slow and clunky Cupid ability, Archer Kirby can shoot rapid-fire volleys of fast and straight-flying arrows from one end of the screen to the other. In addition, Kirby can carefully angle his arrows for a more precise hit, and can also charge them up to create powerful penetrating projectiles. Other moves include the ability to slash with an arrow like a sword at close quarters or don camouflage to avoid enemy attacks.

When Kirby gains the Archer ability, he obtains a fancy purple hat with a white trim and a big yellow feather sticking out the back. His bow is red with a star insignia in the center, and his arrows are silver-tipped with golden-brown shafts. Since its debut, Archer has only appeared one other time in the main series (in Kirby: Planet Robobot), with the rest of its appearances being in the Kirby Fighters games.

Since its debut in Kirby: Triple Deluxe, Archer has remained more or less consistent in its look and functionality. Archer Kirby's move-set allows him to shoot different types of arrows in various patterns. He can also swing his arrows in close quarters or camouflage himself with a cardboard cutout colored in crayon. Archer Kirby's full move-set is as follows (excluding minor changes made in Kirby Fighters 2, detailed in a separate table below):

When Archer Kirby uses his Camouflage, the object he hides behind can be a number of different things chosen at random (similar to the Stone transformations in many games). These are as follows: 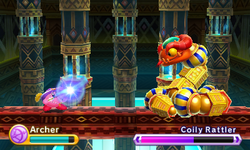 Archer makes its debut in Kirby: Triple Deluxe, and can be obtained from the enemy Spynum. There are a number of puzzles in this game which specifically require the use of the Archer ability and involves the player tilting the Nintendo 3DS to line a pathway for Kirby's arrows.

Archer is also available as one of the abilities in the sub-game Kirby Fighters.

Archer is one of the available Copy Abilities which can be selected in Kirby Fighters Deluxe. It functions identically to the way it did in Kirby Fighters. Additionally, an unlockable alternate hat for Archer Kirby can be obtained in this game, which gives him a green hat with upward-facing frills and a different bow with a largely green coloration. 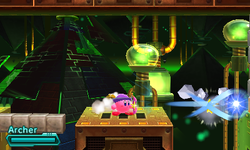 Archer returns in Kirby: Planet Robobot, and is still supplied by Spynum. Aside from gaining a few new Camouflage forms, it is unchanged from its appearance in Kirby: Triple Deluxe.

Archer returns in Kirby Fighters 2, playing largely the same way it did in its previous appearance. It is unlocked for use by the player upon reaching Fighters Rank 28. This game also features two alternate looks for the ability, those being the Hunter's Hat (unlocked at Rank 64) and the Cyber Hat (unlocked at Rank 92). Choosing the Cyber Hat also replaces the cardboard Camouflage cutouts with holographic equivalents.