Throw is one of the rarer Copy Abilities in the Kirby series. It is one of the few to utilize Kirby's core ability to Inhale, which Kirby does to grab an enemy, defeated Mid-Boss or a Star Block. After grabbing one of them, Kirby becomes invincible and is able to pack a powerful toss in one of the six directions specified by the directional pad. The thrown projectile will be able to decimate most common enemies and otherwise do large amounts of damage, while also destroying any Star Blocks and Metal Blocks in its path.

The ability is essentially an enhancement to inhaling. Its concept is similar to Backdrop while it looks extremely similar to Suplex. 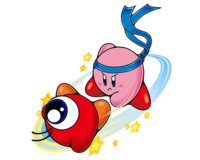 Artwork of Throw Kirby from Kirby: Nightmare in Dream Land.

Throw first appeared alongside the Copy Ability mechanic itself in Kirby's Adventure. In this game, the Throw ability is obtained from Rolling Turtle, a Mid-Boss who attacks Kirby with various grappling techniques. In addition to throwing enemies and blocks, Throw Kirby is also able to capture inhalable thrown objects such as the Meta-Knights' weapons. Throw's ability to bust metal blocks with the objects he tosses makes it a useful tool, but its rarity means that there's almost always another ability that can be obtained quicker to do the same job.

In the game's remake Kirby: Nightmare in Dream Land, Throw Kirby gets his blue headband for the first time. Rolling Turtle is replaced by Phan Phan, another Mid-Boss who attacks Kirby in a similar fashion to Rolling Turtle.

In Kirby & The Amazing Mirror, Kirby still obtains the Throw ability from the Mid-Boss Phan Phan like in the previous title. While in this game Kirby's regular inhaling ability tires him after a few seconds, Throw Kirby's inhaling can be used indefinitely.

In Kirby: Squeak Squad, Kirby can obtain the Throw ability from the common enemy Bun. If Throw Kirby tries to inhale a major member of the Squeaks, it will stun them and make them drop any Treasure Chests they happen to be holding, as if attempted with a regular Inhale. After collecting Throw's Ability Scroll, it can also take on fire, ice or electric elemental attributes of grabbed enemies.

Throw here gains a new idle animation: Kirby holds his arms in a fighting pose, while his headband blows in the wind, similar to the idle animation of Fighter Kirby.

Throw Kirby makes a single appearance in Kirby: Right Back at Ya! in the episode Cowardly Creature. Kirby gains this ability after inhaling one of the large spike balls tossed at him by Phan Phan while it is possessed by Whippy. Using this ability, Kirby inhales to grab Whippy, and then proceeds to toss him around before finally launching him into outer space with a "tornado throw".