Paint Roller is a main boss in Kirby's Adventure, its remake Kirby: Nightmare in Dream Land, and Kirby's Avalanche. He is an artist on roller skates whose creations can come to life. Apart from his major appearances, Paint Roller is featured in the Kirby: Canvas Curse sub-game, Paint Panic, and an episode of the anime, Kirby: Right Back at Ya!.

Paint Roller appears as an orange, spherical creature with long, thin arms and legs. He wears red roller skates (hence his name), a baseball cap, and a pair of gloves on his hands. Paint Roller has five fingers on each hand, and his face only consists of big, round eyes and pink cheeks. He wields an oil pastel as his primary artistic utensil.

Paint Roller painting an object to attack Kirby with in Kirby: Nightmare in Dream Land.

In Kirby's Adventure, and its remake, Kirby: Nightmare in Dream Land, Paint Roller is the boss of Ice Cream Island.

Paint Roller is battled in a two-floored room. The upper floor is divided into two platforms, and has a gap that Paint Roller and Kirby can go through. There are four canvases, each located at one of the room's corners. In Kirby: Nightmare in Dream Land, the room is slightly larger and the scenery was altered, now sporting a rainbow.

Paint Roller may paint one of eight images:

Paint Roller makes his next appearance in Kirby's Avalanche, where he is the 11th opponent faced in Competition mode. Before his battle, Paint Roller offers to paint Kirby "a lovely portrait... of [him] losing" and then laughs. It is revealed that Paint Roller is an art student, indicated by Kirby's dialogue with him. His name appears as "PAIN" while facing Kirby. His equivalent in the Puyo Puyo series is Witch. 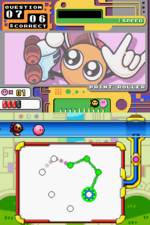 Screenshot from the Paint Panic Boss Game, where Paint Roller makes his appearance.

Appearing in Kirby: Canvas Curse, Paint Roller is a boss during the mini-game Paint Panic. He paints outlines of objects, which Kirby must redraw in a connect-the-dots fashion. If Kirby is too slow, however, the Bombers that follow him catch up with him and explode. If Kirby reaches the end, he must activate a self-destruct code, defeating Paint Roller.

Paint Roller makes a cameo in Kirby Super Star Ultra, as one of the cards in the Kirby Card Swipe sub-game.

In Kirby: Planet Robobot, Paint Roller appears as one of the game's collectible stickers, using his artwork from Kirby's Adventure.

In Kirby's Dream Buffet, Paint Roller is depicted on a Character Treat, using his artwork from Kirby: Nightmare in Dream Land.

Paint Roller appears as one of Night Mare Enterprises' monsters in the Kirby: Right Back at Ya! episode Dedede's Monsterpiece, where he vandalizes various famous paintings displayed in the Royal Acadddemy of Arts on King Dedede's orders to make them "more his style". After remembering that the paintings were supposed to be returned intact, King Dedede stops Paint Roller and has him paint a portrait of Dedede instead. However, this portrait ends up coming to life and antagonizing King Dedede and the other museum guests before Meta Knight shows up to destroy it with a burning torch.

As this is happening, Paint Roller starts painting a giant bomb threatening to blow everyone up. Kirby is sent to stop him, and ends up inhaling Paint Roller's paintbrush to gain the Paint Copy Ability. Using this ability, Kirby tries to chase Paint Roller down and avoids more of his attacks using painted objects. Eventually, Kirby paints a rocket and points it at Paint Roller, blowing the monster up along with the museum. 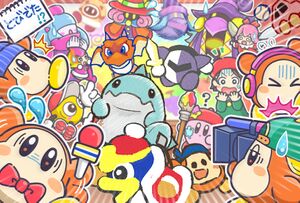 Paint Roller appearing alongside various artists in the series in a Kirby JP Twitter illustration.