Kirby Mass Attack is a spin-off Kirby game released for the Nintendo DS in 2011. The central premise revolves around using the Nintendo DS stylus to direct and guide up to ten otherwise small and helpless mini-Kirbys, who were split from the original by the game's villain Necrodeus in order to make the pink puffball easier to defeat. Instead of controlling the Kirbys directly, the player has to use the stylus to flick them around, tell them where to run, and drag them over obstacles when needed. A lot of micromanagement is needed to keep the Kirbys from perishing as they make their way through the stages, and if any are lost, the Kirbys will need to collect fruit in order to create new ones, with the player losing if all the Kirbys are defeated. The objective is to lead them through the stages until encountering and defeating Necrodeus at the very end, so that Kirby may become his whole self again.

In addition to the main story and its expansive stages, collections of enemies, and variety of devices, hazards, and other gimmicks, Kirby Mass Attack also features a very large collection of unlockable Sub-Games - more than any other game in the series - which offer novel ways to play and tons of references to other Kirby games and even other games outside of the Kirby series. Kirby Mass Attack also features a very detailed hint system, which comes in the form of Daroach and his airship. Daroach's main motive for helping the Kirbys is so they can collect the various medals hidden throughout the game for him.

Kirby Mass Attack's name was first revealed in the 267th issue of Nintendo Power (May 2011). The game was one of the Nintendo DS titles shown at E3 2011. Kirby Mass Attack was first released in Japan on August 4, 2011, and was released in North America a month later, then in Europe and Australia roughly a month after that. It would be the last Kirby game to release for the Nintendo DS, and the last one to feature primarily sprite-based graphics. Kirby Mass Attack would go on to sell roughly 1.06 million copies, making it the lowest in the list of Kirby games that have sold at least a million units.[2]

The premise of Kirby Mass Attack involves Kirby flying down to explore a novel area in the south of Popstar called the Popopo Islands, only to be attacked by a dark wizard named Necrodeus: the leader of a marauding band of skeletal creatures called the Skull Gang. While Kirby is taking a nap, Necrodeus appears out of nowhere and zaps Kirby with his magical staff, splitting the pink puffball into ten weaker copies of himself. Necrodeus then proceeds to pick off the Kirbys one-by-one in hopes of snuffing out the planet's greatest hero so he can blot the light of Popstar out forever. However, one of these smaller Kirbys manages to escape, and from there, rendezvouses with his heroic heart which popped out of him when he was split. The heart - which serves as the player's cursor in gameplay - leads this Kirby into the wilderness so that he can regain his numbers and eventually restore himself to normal. 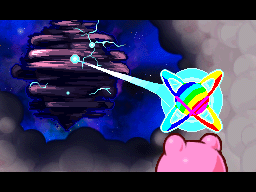 Kirby using Rainbow Medals to shine a beam of light through Necro Nebula.

As Kirby ventures through each of the Popopo Islands and regains his numbers, he is repeatedly attacked by lesser members of the Skull Gang who try to carry Kirbys away and destroy them. As they progress, the Kirbys receive advice from Daroach - the leader of the Squeaks - who travels with his band in an airship they built. Daroach tells the Kirbys that they need to collect medals in each island they visit, and pay particular mind for special Rainbow Medals, which - if gathered - can be used to pierce the gloom surrounding the Skull Gang's homeworld of Necro Nebula. After visiting each island and defeating the Skull Gang's influence there, the Kirbys manage to collect all of these medals, and then are able to infiltrate the craggy lifeless homeworld of Necrodeus and his minions.

When the Kirbys arrive at Necrodeus' palace, they find his staff - the one he used to split them apart - and try to claim it so the spell can be undone, but Necrodeus shows up and swallows the staff, forcing the Kirbys to defeat him if they want it. After a long and grueling struggle - part of which takes place in a zero-gravity environment - Necrodeus is soundly beaten and relinquishes the staff as he is banished to oblivion. Using the staff's magic, the Kirbys are finally able to recombine into one being. This done, Kirby takes to his Warp Star and returns home to Popstar, but not before pondering for a moment about how the darkness surrounding his home makes it shine all the brighter.

The player can flick the Kirbys to make them jump.

Kirby Mass Attack is - like the main Kirby series games - a side-scrolling 2-D platformer that tasks Kirby to reach the end of stages filled with various enemies, obstacles, and occasionally boss fights. However, much like Kirby's Epic Yarn before it, the core gameplay is very different from that of the main series. Due to having been split into ten weaker copies, the Kirbys are no longer able to hover, inhale, or use Copy Abilities. Instead, their main means of attack is by latching onto enemies and pummeling them, or by being tossed at enemies and hazards to impact them, in a very similar manner to how Pikmin fight. In another similarity to the Pikmin games, the player does not control the Kirbys directly, but instead plays the role of a leader in the form of Kirby's heroic heart, which is a star-shaped object that acts as a cursor. This heart is controlled by means of the Nintendo DS stylus, and tapping places on the screen tells the Kirbys where to go. Other key actions include tapping and holding down to drag the Kirbys along a magical line to get them around hazards, or tapping and quickly flicking a Kirby to throw him in the direction indicated.

In another departure from the main Kirby series, Kirby Mass Attack does not have a traditional health meter for the Kirbys, but instead gives each one two hit points, and shows their state of health by their body color: Healthy Kirbys are pink, wounded Kirbys are blue, and KO'd Kirbys are gray. Wounded Kirbys can be restored to full health by tossing them through a Recovery Ring, which can be found at various points in stages. KO'd Kirbys will slowly flutter away on angel's wings and can be saved and returned to blue status if they are captured by a living Kirby before they are gone. However, some hazards such as Skullys and Grueglooms may destroy Kirbys they manage to catch without any chance of rescue, while other hazards such as crushers will KO Kirbys regardless of their health status. In the case that any Kirbys are lost, the player can replenish their numbers by having the remaining one(s) collect Fruit. Collecting 100 points worth of fruit will automatically add a new Kirby to the team, or give a score bonus if there are already ten. If all 10 Kirbys are lost during a stage, a Game Over occurs, and the stage has to be replayed from the beginning (there is no extra life system in Kirby Mass Attack).

The main story mode of Kirby Mass Attack takes the Kirbys through over 40 extensive stages, each of which has a wide array of unique enemies, devices, hazards, and other gimmicks (many of which are unique to this game). As the Kirbys progress through each stage, their main objective is to collect the medals hidden throughout. One medal in each stage is designated as a Rainbow Medal, and collecting all of these is required to access the final level of Necro Nebula and complete the game. Collecting medals is also how the player unlocks extra game features, including the Sub-Games, boss rush mode, and other menu options like the Theater.

At the end of each stage, the player is graded based on how well the Kirbys were handled, which is separate from the medals. The rankings are as follows:

While these rankings have no direct effect on gameplay, getting a Gold Star on every stage is required for 100% completion. This means that to earn this distinction, the player has to clear each individual stage and boss fight without any Kirbys being harmed once, which is among the most difficult tasks any Kirby game directly imposes on the player.

There are five levels in the main story mode of Kirby Mass Attack. The first four take place in an area in the southern regions of Popstar called the Popopo Islands. The fifth level - Necro Nebula - does not appear until every Rainbow Medal is collected in the prior four levels. For more information about each level in the game, click the corresponding island in the navmap below.

A compilation of various enemies from Mass Attack with their Japanese names (some were never localized).

Kirby Mass Attack features a stunningly large cast of enemies, more than any other single Kirby game. Additionally, many of these enemies are new to the series, and of these, most have not reappeared in any game since. The following lists each enemy in alphabetical order:

The following enemies and bosses appear only in the Sub-Games:

There are five bosses in Kirby Mass Attack, each serving as the final obstacle of each level. The first four are fought for a second time in Necro Nebula. 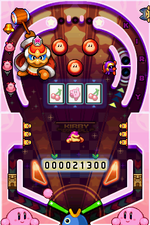 Screenshot of Kirby Brawlball; one of the unlockable Sub-Games in Kirby Mass Attack.

The following is a list of staff who have worked on Kirby Mass Attack: