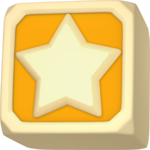 Artwork of a Star Block for Kirby: Planet Robobot.

A Star Block,[1] called Star Box in Kirby's Dream Land, and Inhale Block in Kirby Super Star's manual, is a yellow-orange square block with a bordered white star insignia inset which is commonly found in most Kirby games as part of the environment, whether it be used as a barricade, to build platforms, or just tucked away in the corner of an area. Star Blocks are typically about Kirby's size (though some are larger) and can be easily inhaled by the pink puffball and used to spit out Star Bullets. They can also be destroyed in a single hit by any attack, including Air Bullets, Slide attacks, Water Gun shots, or Headbutts. In some games, such as Kirby & The Amazing Mirror, they can also be destroyed (albeit sometimes inadvertently) using a Dive Attack. In many cases, Star Blocks will reveal other items or even hidden Doors when broken.

Star Blocks are typically involved in puzzles or other environmental challenges which utilize their various properties. Sometimes they are simply meant to be used as ammunition against enemies or to hit switches and other objects, while other times they serve as a fragile set of platforms that Kirby may want to keep intact so he or another character can traverse a chasm with a Key or other item. In rarer cases, Star Block formations may be tied more esoterically to other triggers, such as in Kirby 64: The Crystal Shards, where Kirby has to selectively break certain blocks in a formation to make one of the Crystal Shards appear. Due to their ubiquitous nature, some enemies (like Blockin) will disguise themselves as Star Blocks in order to get the jump on Kirby.

Star Blocks first appeared in Kirby's Dream Land, and have reappeared in every main-series game since then, along with many of the spin-offs. As such, it is simpler to list all the games which do not have Star Blocks, which are as follows:

Star Blocks are often seen packed in tight formations that can be more quickly cleared with certain abilities, as is the case here in this image from Kirby's Return to Dream Land.

Star Blocks look and behave roughly the same way in nearly every game they appear in. In the following games, however, Star Blocks have peculiar properties:

In Kirby's Block Ball, Star Blocks are referred to formally as "Score Blocks", and can be hit multiple times before they disappear, with each subsequent hit yielding more points than the last. It is possible for these blocks to start out invisible until they are hit the first time.

There is another variety of block in this game that is referred to as a Star Block, but this does not resemble a traditional Star Block, instead being much narrower and darker with rounded edges. These are collected in the Target Shooting rounds and then cover the spikes during boss fights.

In both the Game Boy and Super Famicom versions of Kirby's Star Stacker, Star Blocks are the main elements of each puzzle round that need to be cleared (or "stacked") in order to earn points and progress through the game. This is done by lining up Animal Friends between the blocks to make them disappear, or by using Bomb Blocks. Star Blocks can appear in new rows from the bottom or be deposited from the top depending on various circumstances.

In Kirby: Canvas Curse, Star Blocks can be destroyed by tapping them with the Nintendo DS stylus, in addition to more normal methods. Principally, they come in two distinct sizes in this game, with the larger ones taking up a 2x2 area as compared to the standard ones.

In Kirby Mass Attack, larger Star Blocks take several hits to destroy, and visibly crack as they are damaged.

In Kirby and the Rainbow Curse, Star Blocks can appear in extra wide varieties which block off hallways and take several hits to destroy, visibly cracking as they are damaged. Star Blocks in this game are distinct from the softer Clay Blocks in the fact that Kirby cannot simply power through them without using a Star Dash or other special technique.

In Kirby's Blowout Blast, larger Star Blocks can individually provide Kirby with a Blaster Bullet when inhaled. Additionally, when Kirby has a full belly, he will automatically break through Star Blocks that he touches.