This article is about the shark-like enemy from Kirby's Dream Land 3, and should not be confused with Knuckle Joe.

Joe is a small turquoise shark-like foe with a propeller for a tail who can be sparsely found in pools of water around Popstar, patrolling the waters by itself. Aside from the color and diminutive stature, Joe resembles a great white shark in look and behavior. If Kirby or another playable character gets too near, Joe will bite down on them, dealing damage without being damaged in return, unlike most other enemies. Joe can be inhaled, but will grant no Copy Ability when swallowed.

Joe makes its first and only video game appearance in Kirby's Dream Land 3. It can be found very rarely in pools of water, swimming back and forth. It makes little attempt to actively pursue Kirby or his friends, so they should have little problem avoiding Joe in most situations.

In Kirby's Dream Land 3, Joe can be found in the following levels and stages: 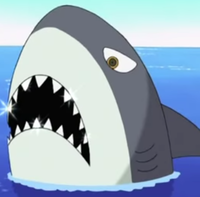 Joe as he appears in Kirby: Right Back at Ya!.

Joe makes several cameo appearances in the Kirby: Right Back at Ya! series. Here, he is much larger than his video game counterpart, and antagonizes King Dedede and Escargoon whenever they set out to sea to cause trouble. Joe is a friend of Kine the sunfish, and helps him defend various ocean monuments, such as the Rainbow Coral Reef.