Laser Ball is a flying spheroid enemy which can shoot lasers from its eyes. It made its first appearance in Kirby's Adventure and can be found in other main-series Kirby games up until Kirby Super Star Ultra. As its name suggests, Laser Ball is the most common enemy to give out the Laser ability, but in Kirby Super Star and its remake, it yields the Beam ability instead. Laser Ball attacks Kirby by floating in his direction, and proceeds to shoot lasers at him. Unlike most enemies, Laser Ball can fly through walls, often retreating at great speed after it fires its rounds at Kirby.

Laser Ball has a relatively simple appearance, being a gleaming and primarily orange circle with eyes. Despite its unassuming appearance, Laser Ball is quite mobile, and is one of the few enemies able to move through walls. Despite this, it can also occasionally be found stuck inside a walled enclosure, waiting for Kirby to come gobble it up.

Laser Ball is one of the more difficult enemies that Kirby will face on his adventures, particularly if in large numbers. Its habit of flying in and firing lasers straight at Kirby means that it will always get in his way, so Kirby could just as easily take damage by running into it as he would actually getting hit by its lasers. Laser Ball is capable of firing up to four laser volleys in rapid succession, though unlike the Laser ability proper, these do not bounce off of slopes, even when Ghost Kirby possesses it. Possessed Laser Balls are also not able to go through walls. 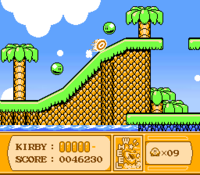 Laser Ball makes its debut appearance in Kirby's Adventure and also appears in the remake. Here is where its look and behavior was established. It is often found just before or just inside areas that have slopes which the Laser ability can take advantage of.

Laser Ball can be found in the following levels and stages: 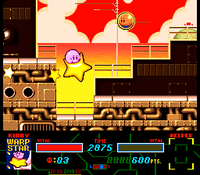 Kirby flying by a Laser Ball in Kirby Super Star.

Laser Ball appears in these games, though this time it provides the Beam ability. It is found only in The Great Cave Offensive, Revenge of Meta Knight, Milky Way Wishes and Meta Knightmare Ultra.

A Laser Ball gets the perfect opportunity to fire at Kirby in Kirby & The Amazing Mirror.

Laser Ball appears in both of these titles, once again providing the Laser ability. Its look and behavior is unchanged from its earlier appearances.

In Kirby & The Amazing Mirror, Laser Ball can be found in the following rooms:

Laser Ball cameos as a randomly-obtained Keychain in this game. Here, it is depicted as its sprite from Kirby: Nightmare in Dream Land.

In Kirby Fighters Deluxe and its sequel Kirby Fighters 2, Laser Ball is one of the enemies that can appear (in its original 8-bit form) on the Butter Building Battle Stage. Here, it flies in on either the left or right side and shoots out up to three laser blasts before flying away again. Both contacting Laser Ball and getting hit by its lasers results in 12 points of damage. It can be easily defeated using any attack.