Mosugaba is a colossal insect monster that appears in the Kirby: Right Back at Ya! episode Caterpillar Thriller. It initially appears in caterpillar form living and feeding on the Embrya Island in the South Seas until its guardians - the twin Island Sisters - are kidnapped by Night Mare Enterprises. After being sent to Castle Dedede, the sisters call Mosugaba to Dream Land using their song, and it proceeds to affix itself to the castle and wrap itself in a cocoon to metamorphose into a giant moth. After emerging, it proceeds to attack everyone by showering them in dust which gives them all severe hay fever, but Mosugaba is eventually pacified when its guardian fairies are returned to it, and they fly back to their home island in peace.

Mosugaba is directly based off of the famous Japanese monster Mothra.

Mosugaba is a colossal moth which is seen in both is larval and adult stage. In its larval stage, it is a giant armored caterpillar with thick orange chitinous segments accented with green markings, most of which are on its head segment. Mosugaba's mouth and limbs are softer, and are a dim purple in color. Mosugaba is capable of swimming quickly through water, and can also move at a decent pace on land. It is capable of eating entire trees at a go, and can also spit out vast quantities of silk from its mouth.

After incubating in its silk cocoon, Mosugaba emerges as a giant moth with two pairs of wings. The upper wings are largely orange with a pattern on them that resembles eyes, and the lower wings are simpler in pattern, dark red in hue, and slightly smaller. Its main body is gray, and it has two pairs of legs as well as large compound eyes which merge together in the middle. In this form, Mosugaba attacks by shedding scales from its wings which cause severe allergic reactions in those susceptible. These scales are potent enough to give the otherwise resilient Kirby and King Dedede severe hay fever.

Mosugaba is a naturally passive creature, and has a strong bond with the Island Sisters who can call and calm it with their song. Mosugaba will only attack to defend these two fairy girls. 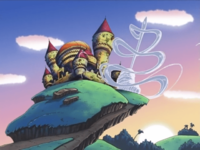 Mosugaba creating a cocoon for itself after affixing to Castle Dedede

Mosugaba appears in the episode Caterpillar Thriller. Here, its companions the Island Sisters are kidnapped by Night Mare Enterprises and sold to King Dedede - who is hoping for a monster with "super pollen" to make Kirby sick - in order to summon the monster with their singing. Once Mosugaba arrives, it makes a stir by eating several cedar trees and then approaching Castle Dedede. King Dedede tries to repulse the monster - not knowing it was the one he had the sisters summon - but fails, and Mosugaba starts to metamorphose on the castle by wrapping itself in a cocoon.

To destroy it, King Dedede tries to set the cocoon on fire, but this only causes the metamorphosis to speed up, and Mosugaba emerges from the cocoon in its adult form. It then proceeds to attack everyone by fluttering its wings, spreading dust everywhere and making both Kirby and King Dedede dreadfully sick. Tiff calls for the Warp Star to help Kirby fight back, but this does not seem to help much, as there is little Kirby can do against Mosugaba in his severely hampered state. Instead, Escargoon decides he has had enough hay fever and turns on King Dedede by giving Tiff the key to the Island Sisters' cage. After being freed, the Island Sisters sing their song to calm Mosugaba, and Kirby sees them off as they return to their home island.