Kirby's Blowout Blast is an expanded spin-off game released on the Nintendo 3DS eShop in 2017. It is based on the Kirby 3D Rumble Sub-Game in Kirby: Planet Robobot. In this game, the player takes control of Kirby in a 3-D space, making use only of his base Inhale and spit abilities to defeat all his foes in a series of arcade-like levels where the goal is to earn as high a score as possible. 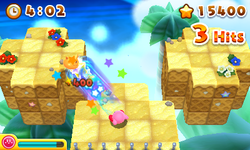 The aim of Kirby's Blowout Blast is to traverse the stages and defeat enemies using Kirby's inhale as efficiently as possible.

Much like its predecessor, Kirby 3D Rumble, the aim of Kirby's Blowout Blast is to reach the end of each stage while earning as high a score as possible. The stages are a linear progression along a 3-dimensional pathway which Kirby must traverse, collecting coins and defeating enemies along the way. Instead of relying on Copy Abilities, Kirby has only his Inhale and subsequent Star Bullets or Air Bullets to deal with enemies.

New to Kirby's Blowout Blast is that if Kirby inhales multiple enemies or objects, he will become very big and bloated. In this state (known officially as Full Belly Kirby), Kirby takes up more space, and is able to both break Star Blocks by touch and collect coins in a wider area around him. When he then releases his payload, the star bullet comes out as a giant rainbow-colored Blaster Bullet which will take out enemies in a very wide path, wider than the bullet itself appears to be.

At the end of each stage, Kirby must either deal with an entourage of enemies or fight a Boss on top of that. Once cleared, a score will be calculated based on how well Kirby did during the stage. Scoring factors include time remaining, the number of coins collected, the number of enemies defeated (bonus points are conveyed with larger bullet combos), and how many times Kirby was hit (with less naturally being better in this case). From there, a trophy is rewarded, with the worst being bronze, (awarded simply for completing the stage) up to platinum at best (a practically perfect run). Completing the stage is all that is necessary to advance in the level, but a Gold or better is needed to unlock the EX levels.

Like in most other titles, Kirby has a health bar, and if he is hit too many times (or falls out too many times), he will be defeated and will have to restart the stage. There are a number of Food items that can be collected to restore vitality, but these are not worth any points (and are useless if the player is aiming for Platinum rank). 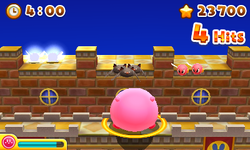 After inhaling a lot of enemies, Kirby becomes very big and bloated. In this state, he can collect Score Coins in a wider area and break through Star Blocks he walks into. His star bullets also turn into Blaster Bullets, which can defeat enemies in a very wide area.

When each stage is cleared, a score is given to the player depending on how well the stage was performed. There are a number of ways to earn points along the path of each stage.

Firstly, coins can be collected in each stage, which add to the score. To collect them, Kirby has to just move over them. There are three types of coins, each worth more than the last:

Secondly, enemies are worth points when defeated. Enemies have specific point values assigned to them when defeated, based on their type, but this scoring can be increased based on certain factors. If a normal enemy is hit by a star bullet, its worth goes up in conjunction with the combo amount in the upper-right of the screen, which will maximize at 1000 points per target. As such, getting a higher combo will yield many more points than defeating each enemy individually. Mid-Bosses and Bosses have a specific point value when defeated which, like the normal enemies, are listed in their category below.

Third, the amount of time remaining when a stage is cleared will also contribute to the final score. Each second remaining is worth 5 points.

Finally, there are four bonus criteria to be obtained at the end of each stage. Getting all four of these is a good indicator of whether a Platinum trophy can be earned:

Each of these bonuses is worth 3000 points.

There is only one way to lose points during a stage, and that is if Kirby is hit. Getting hit loses 100 points, and if it was due to an enemy collision, that enemy may be defeated and incur no points for it.

The following are the four ranks of trophy that are obtainable at the end of a stage. Getting Gold or better is required to unlock EX stages, and getting Platinum is required for 100% completion.

Overall there are 5 primary levels, 5 EX levels, and a Secret Path level unlocked at the very end. Each level ends with a Boss stage of some variety, and is themed after an area from Kirby's Dream Land.

In EX stages and in the Secret Path, Kirby has only half his usual health.

Due to the lack of Copy Abilities in this title, all of the enemies in Kirby's Blowout Blast are ability-neutral. Some enemies are larger than others, meaning that they take longer to inhale, and when spat out, produce blaster bullets that pass through enemies on their own. Certain enemies cannot be defeated, so they are worth no points:

These large Mid-Bosses appear in small numbers, only in Level 5 and beyond. There are three different varieties, each stronger than the last:

Unlike in Kirby 3D Rumble, Masher cannot be inhaled, and bursts as soon as he is defeated.

Unlike Kirby 3D Rumble, this game features boss encounters at the end of each level. These bosses fight in a more elaborate manner than common enemies, and have specific arenas devoted to them. Each boss (excepting Giant Masked Dedede) also has a Revenge form which is faced in the extra stages. The bosses of Kirby's Blowout Blast are as follows:

The following is a list of staff who have worked on Kirby's Blowout Blast: