Mr. Frosty can be described as a bipedal walrus-like man who wears overalls with a noticeable patch or opening on the rump. His main method of attack is to toss blocks of ice at Kirby or try to body slam him. Other attacks may include trying to chase after Kirby and eat him, or use acrobatics to jump at him.

Other variants of Mr. Frosty include his bright swimsuit-wearing cousin Mr. Floaty from Super Kirby Clash, and the disheveled feral Beast Pack version from Kirby and the Forgotten Land called Wild Frosty.

In Kirby's Adventure and its remake, Mr. Frosty appears as one of the first Mid-Bosses. Here is where his familiar battle style was established; namely, his ability to kick block of ice around and swallow Kirby. He is first seen in Vegetable Valley - Stage 4.

In Kirby's Pinball Land, Mr. Frosty appears in the lowermost board of Poppy Brothers' Land. Kirby can bump into him to earn 480 points and make his overalls slip for a moment. After being bumped 6 times, Mr. Frosty will change his pose, and should Kirby run into him again, the overalls-wearing walrus will grab him. From there, the player can time a release with the A button to make Mr. Frosty release Kirby in one of four directions.

Acting exactly the same as in Kirby's Adventure (save for giving Ice instead of Freeze), Mr. Frosty reappears in Kirby's Dream Land 2.

Mr. Frosty appears in the following levels and stages:

In Kirby's Block Ball, Mr. Frosty appears as both a regular enemy and as a Boss in Stage 6. As a regular enemy, he takes 4 hits to defeat and is worth 5000 points. As a boss, he has 12 hit points and attacks by rolling around, worth 50000 points when defeated.

Mr. Frosty makes two notable appearances in this collection of mini-games, one being the Arrange Ball where nine of them highlight occupied holes and one large lies in the background, and the other in Pinball where he serves as one of the better targets on the board.

Mr. Frosty makes a somewhat strange appearance in Kirby Tilt 'n' Tumble. Here, he is not a mid-boss, nor can he actually harm Kirby. Instead, he appears in Lvl 3-1 riding a surfboard and carrying a Red Star. When Kirby gets close, Mr. Frosty will try to ride away from Kirby, taking the Red Star with him. If Kirby collides directly with Mr. Frosty, he will be bounced away similar to a bumper. Kirby will need to grab the Red Star from Mr. Frosty before the walrus gets away with it.

Mr. Flosty,[sic] as he was named in Kirby & The Amazing Mirror.

Mr. Frosty is a mid-boss in Kirby & The Amazing Mirror, now named Mr. Flosty in English. He can throw ice blocks of two different sizes. He is identical to his appearance in Kirby: Nightmare in Dream Land. 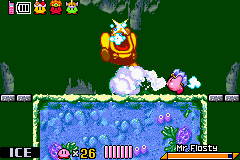 Kirby battles Mr. Flosty in Olive Ocean. His misspelled name is visible in the lower-right corner.

Mr. Flosty can be found in the following rooms:

Mr. Frosty is a mid-boss in Kirby: Squeak Squad, and has the same appearance and attacks as in Kirby: Nightmare in Dream Land.

In Kirby: Squeak Squad, Mr. Frosty can be found in the following stages:

Mr. Frosty appears in the Kirby Mass Attack Sub-Game Kirby Quest as one of Kirby's opponents. He appears in Stage 26 alongside two Oohroo and in Stage 38 with two Fuufuu. He has 480 HP.

Mr. Frosty returns as a mid-boss and makes his first 3D appearance in Kirby: Triple Deluxe. Like the other bosses, he also has a DX form. He has a new attack, where he flies around the screen in a cyclone of snow. Despite this, he is arguably the easiest Mid-Boss to defeat in this game.

In Kirby: Triple Deluxe Mr. Frosty can be found in the following levels and stages:

Mr. Frosty is one of the opponents that must be faced in the Sub-Game Team Kirby Clash. Here, he is much larger and with greater health. He also can throw more than one ice block at a time, in an effort to hit multiple Kirbys.

Mr. Frosty was the first confirmed Mid Boss to appear in Kirby Star Allies, and is the first one Kirby and his friends will face, in Green Gardens. He is somewhat larger than he has been in other main series titles, and has obtained new overalls which no longer have a hole in the rump (though it is still hard to miss). He also has a harder variation much like all the other mid-bosses with some new attacks and upgrades to his already-existing attacks. Curiously, unlike the other Mid-Bosses in this title, Mr. Frosty cannot be recruited directly as an ally, instead being replaced by Chilly if a Friend Heart is tossed at him once he's down.

The following is a list of attacks Mr. Frosty can perform as a mid-boss in Kirby Star Allies. Italics denote variations done by his harder variation only.

There are many different attack orders that Mr. Frosty uses for his various fights. Click "Expand" on the right to see the lists.

After that, he then attacks in a fixed order on loop as follows:

After losing enough health, Mr. Frosty will abruptly switch to this pattern:

His harder variation begins with this attack:

He then proceeds to attack in a fixed order on loop as follows:

Twin Frosty is fought in some stages and on Soul Melter of The Ultimate Choice and comes in two varieties. It can consist of one regular and one hard variation or two hard variations, both of which attack in a different order from each other.

In Kirby Star Allies Mr. Frosty can be found in the following levels and stages: 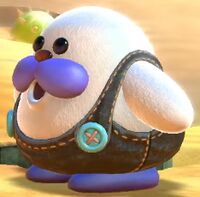 Mr. Frosty returns as an enemy encounter in Super Kirby Clash, serving largely the same role he did in its predecessor. Out of the four Quests he's fought in, he's fought solo in two of them, while paired with other enemies in the other two. He appears with King Doo in Team First Contact and with his similar cohort Mr. Floaty in Team Shimmy.

The following are all of Mr. Frosty's attacks in Team Kirby Clash Deluxe and Super Kirby Clash. Note that attack names are conjectural:

In Kirby and the Forgotten Land, a variant of Mr. Frosty called Wild Frosty appears as a Mid-Boss. His figure description reveals him to be Mr. Frosty after joining the Beast Pack. 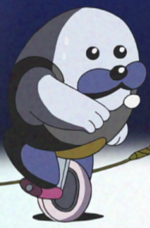 Mr. Frosty as he appears in Kirby: Right Back at Ya!.

Mr. Frosty makes a tiny cameo appearance as a monster in the Kirby: Right Back at Ya! episode Cowardly Creature. He is shown briefly training as part of the "Young Monsters of the Future" program run by monster clowns, attempting to balance on a unicycle.